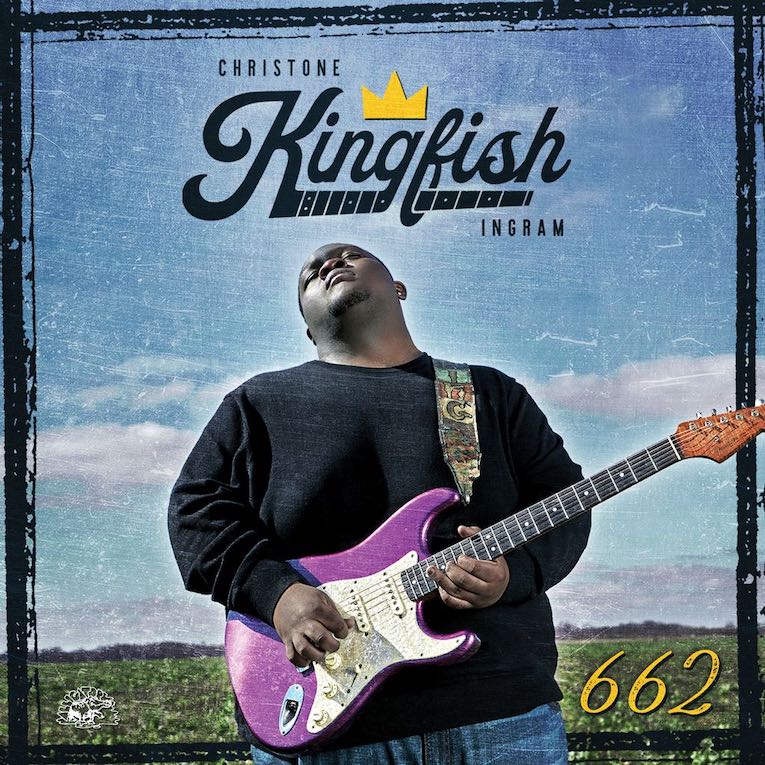 On Friday, July 23, Alligator Records recording artist Christone “Kingfish” Ingram will release his highly anticipated second album, 662. It’s the next chapter in the still-unfolding story of the 22-year-old guitarist, vocalist and songwriter from Clarksdale, Mississippi. Ingram describes 662 (the number is northern Mississippi’s telephone area code) as “a presentation of my life in and away from the Delta.” The album overflows with hard-hitting original songs, jaw-dropping guitar work and deep, soul-possessed vocals. Rolling Stone declared, “Kingfish is one of the most exciting young guitarists in years, with a sound that encompasses B.B. King, Jimi Hendrix and Prince.”

“The world was introduced to me with Kingfish,” Ingram says of his chart-topping 2019 debut. “Now with 662, I want the world to hear and meet a different, more personal side of me. My sophomore album is a direct reflection of my growth as a young man. This album is very personal to me as it was conceptualized, created and co-written during the Covid-19 pandemic when I returned home to the 662 after a truly whirlwind year of change and growth. Coming home to write this album offered a remarkable history for me to draw upon. 662 is an album that sits upon the legacy and influence my blues music elders have instilled in me, but is also my unique, personal story.”

662 was recorded in Nashville and co-written and produced (as was Kingfish) by Grammy-winner Tom Hambridge. It features 13 songs displaying many sides of Ingram’s dynamic personality, as well as his one-of-a-kind guitar and vocal skills. The first single, 662‘s title track, made its worldwide premiere on SiriusXM’s B.B. King’s Bluesville channel on May 10. The song immediately became the #1 Most Added Single on the influential BDS AAA (Adult Album Alternative) Indicator Radio Chart. Guitar World, who in 2020 named Kingfish one of the top 30 guitarists in the world, said, “On 662, Ingram takes things all the way back to the place that shaped him, his hometown of Clarksdale, Mississippi. Anchoring the song with a hot-rodded, Delta–by-way-of-Chuck Berry riff, and punctuating the proceedings with sweet touches of high-gain, fleet-fingered blues guitar glory, Ingram gives a perfect tribute to the birthplace of the blues, showing all the while that the genre is still incredibly vital.”

Since the release of Kingfish, Ingram has quickly become the defining blues voice of his generation. From his hometown of Clarksdale, Mississippi, to stages around the world, the young musician has already headlined two national tours (Fish Grease I & II) and performed with friends including Vampire Weekend, Jason Isbell and Buddy Guy (with whom he appeared on Austin City Limits). He was interviewed by Sir Elton John on his Apple Music podcast Rocket Hour, and recently released a duet with Bootsy Collins. In January 2021, Ingram was simultaneously on the covers of both Guitar World and DownBeat magazines, and graced the cover of Living Blues in late 2020. NPR Music says Ingram’s playing is “astounding…it’s almost like he’s singing through the guitar.”

Ingram’s journey began in the 662 in the city of Clarksdale, in Coahoma County, Mississippi, just ten miles from the legendary crossroads of Highways 61 and 49. Born to a musical family, he fell in love with music as a small child, initially playing drums and then bass. At a young age, he got his first guitar and quickly soaked up music from Robert Johnson to Lightnin’ Hopkins, from B.B. King to Muddy Waters, from Jimi Hendrix to Prince, but all the while developing his own sound and style. He progressed quickly, making his stage debut a few months later at Clarksdale’s famous Ground Zero Blues Club, playing behind one of his mentors, Mississippi blues icon Bill “Howl-N-Madd” Perry. Perry gifted the young musician with a new stage name, “Kingfish.” He performed at the White House for Michelle Obama in 2014 as part of a delegation of student musicians from the Delta Blues Museum. By age 16, he was turning heads and winning awards, including the 2015 Rising Star Award, presented by The Rhythm & Blues Foundation.

On 662, Ingram creates contemporary blues  that speaks to his generation and beyond, delivering the full healing power of the music. Kingfish is one of the brightest new stars of his generation.”