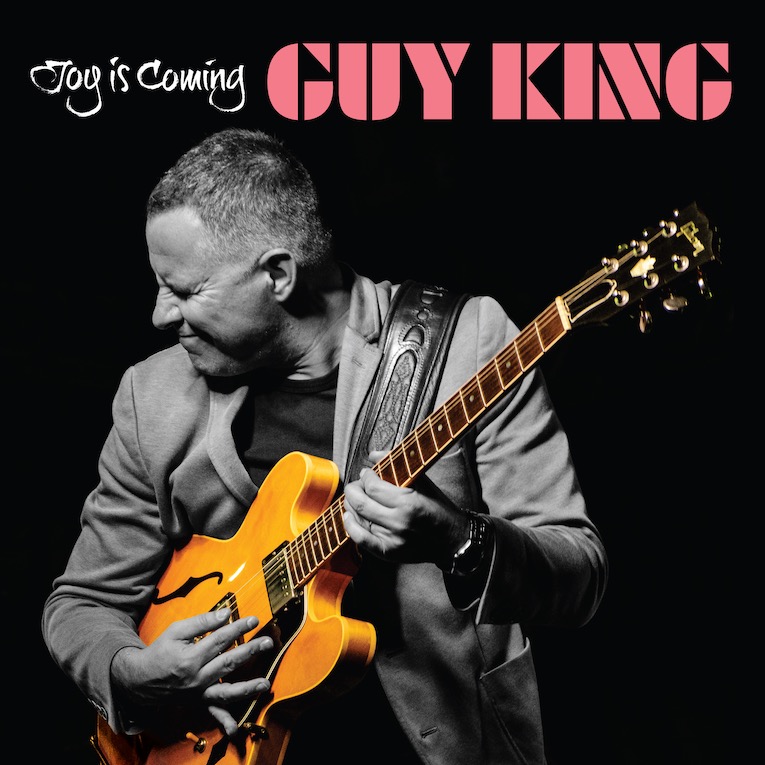 Monstrously talented blues/jazz guitarist, vocalist, and songwriter Guy King gets smooth, funky, and memorable on his new album Joy Is Coming. The platter drops May 28th, 2021 on IBF Records and is an autobiographical masterpiece that tells us a story of redemption, rebirth, and the celebration of life in blues, jazz, and funk tones that penetrate directly to the listener’s heart.

King co-wrote much of the album with legendary songwriter and author David Ritz (“Sexual Healing”) and the pair found a creative chemistry with each other that does a lot to define it. Joe Bonamassa makes a special guest appearance on the record’s first single “Devil’s Toy” and the entire set was co-produced by King and fellow guitar star Josh Smith.

All of this adds up to a release full of high-level musicianship that also has massive crossover potential. King could well achieve mainstream status in the way that George Benson, Bill Withers, Eric Clapton, and Steely Dan did with his ability to make sophisticated, accessible music.

Originally from Israel, Guy King is a known presence to anyone who has been following blues and jazz in the 21st Century. King now lives in Chicago, where he spent six years backing up popular blues bandleader Willie Kent. King went solo after Kent passed on in 2006 and put out his debut album Livin’ It followed by I Am Who I Am and It Is What It Is and By Myself. His guitar style is often described as a mix of Wes Montgomery and Albert King, which makes for a strong drink. He has the highly-evolved vocabulary and harmonic sense of a hardcore jazzer with the fire and grit of the blues right underneath. King is one of the most impressive guitarists to emerge in the last 20 years and he gets better with each new release.

Guy starts the album with its title track “Joy Is Coming.” It’s a warm, welcoming, mid-tempo funk tune that puts King’s skilled and soulful lead vocals in the spotlight. When it comes time to play guitar, King doubles his guitar lines with his voice as a show of mastery and intent. “Devil’s Toy” is a simmering soul cut with 70s inflections and an uplifting appearance by guitar heavyweight Joe Bonamassa. Together, Guy and Joe make the track the six-string event of the summer, covering it in slick lines and sweet tones that will keep you tuned in until the snow flies. Would a full-album pairing of these two be a winner? You bet it would.

“Choices” is a tender, romantic ballad that’s mostly vocal-oriented but King still manages to slide in some cool clean-toned licks in just the right spots. His silky vocals never give way to the guitar firepower you know is there and that sense of restraint gives the track the balance it needs to be successful. “Hole In My Soul” is a percolating blues/R&B number destined to rock houses around the world. It gives King the space to make his guitar sing on top of a groove no living person could resist.

The quietly emotional “A Prayer For Me” is another beautiful jazz ballad that addresses many of the worries and hard situations we all face. The vibe remains positive, though, and King gives us the feeling that he’ll be ok in the end.

Every moment of Joy Is Coming is vital and entertaining so be sure to take in “Oh, Sarah” and the closing song “Looking For You.” Guy King is crafting his legend in real time while we listen and Joy Is Coming could well be the breakthrough his whole life has been spent seeking. This is wonderful music from a player who can literally do it all and you need to get busy listening to it. You won’t find better out there.

Pre-order link for Joy Is Coming