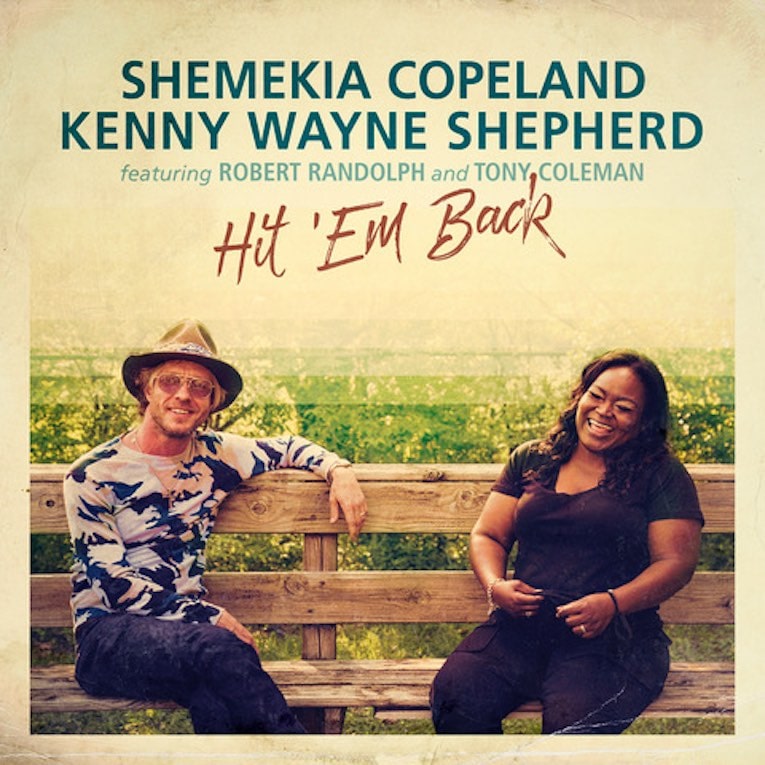 Contemporary blues standard bearers Shemekia Copeland and Kenny Wayne Shepherd have collaborated on “Hit ‘Em Back,” a new track that will be released on the Mascot Label Group’s Provogue label this Thursday, May 27.  The track was recorded just two weeks ago with Copeland and Shepherd joining forces with guest performances from Robert Randolph on steel guitar and veteran blues drummer Tony Coleman who has worked with B.B. King, Etta James, Bobby Blue Bland, Albert King, and Buddy Guy.

“Hit ‘Em Back” was written at the urging of Shemekia who asked her lyricist John Hahn to write a song to address divisiveness and anger within the greater blues community.  Thereafter, she reached out to Kenny Wayne asking if he would write music for the lyrics and join her to record the song. Kenny, along with producer Marshall Altman came up with the music, demo’d it, and sent it to Shemekia who just days later met them in a Nashville studio along with Randolph and Colemen.

All proceeds from “Hit ‘Em Back” will be donated to the Music Maker Relief Foundation, a non-profit whose stated mission is “to preserve the musical traditions of the south by directly supporting musicians who make it, ensuring their voices will not be silenced by poverty and time.”

Shemekia placed the new effort in context, “I did ‘Ain’t Got Time For Hate’ after my baby was born because I wanted to talk not only about problems but also about solutions.” That was followed by “Uncivil War” which is along the same lines. “I had thought those two would be part of a trilogy and now with ‘Hit ‘Em Back’ they are.”  She went on to say, “There’s no doubt that there is racism in this country and in our business but, above all, what brings us together is music.  People are angry and sometime create their own agendas that can divide us.  If we can come together and make it about the music that can only help.  I admit I, too, was part of the problem, putting things in virtual boxes or categories that close us off from one another; the music continues to evolve and change so the very definition of blues has expanded.  You can say ‘this is the blues and that isn’t’ and I’ve been guilty of that, too, but as I’ve grown,  I’ve seen it encompasses everything from rock and folk to you name it. Blues is the root of American music.

Kenny expressed agreement with Shemekia’s ecumenical approach to the blues. “Most of the people who are drawing lines in the sand about what is and what isn’t the blues aren’t making music themselves. The minute you put music out there and share it, it belongs to everybody; music comes from the soul and the soul has no color or appearance and there’s no box to put it in, it belongs to all of us. Anything recorded by actual musicians, playing from the heart, is worthy of support, no matter what you call it.”

Shemekia’s relationship with Kenny dates back decades.  She recalls, “We’ve been running into each other for years, ever since we first met as teenagers; I was 17 and he was 19. Before the ‘Hit ‘Em Back’ session, the last time I saw him was 2019 and I teased him saying “You should produce a rock record for me someday.”  In a sense, that’s happened with “Hit ‘Em Back” but both artists and their track are firmly rooted in the blues. They’ve crossed paths many times and both had opened for B.B. King early in their respective careers. She remarked, “Kenny has been an ally of the blues all this time.”

Shemekia, a three-time Grammy nominee, was just named International Artist of the Year by the UK Blues Federation.  Just last year she, along with her four-year old son Johnny – who was named after her dad, Texas blues great Johnny Clyde Copeland — hosted the Blues Foundation’s Blues Music Award program.  On another front, Shemekia hosts B.B. King’s Bluesville on SiriusXM weekdays 10AM – 3 PM Eastern.

Kenny Wayne Shepherd’‘s Trouble Is album holds the distinction of being the longest running album on the Billboard’s Blues Chart and is among nine of his albums that have achieved #1 status on that chart, three of which have been RIAA certified Platinum along with one Gold album.  He’s received five Grammy nominations and his 10 Days Out: Blues From the Backroads album and filmed documentary combination won both a Blues Music Award as well as a Keeping the Blues Alive Award.  The documentary spotlights Kenny playing with veterans of the genre including Etta Baker, Cootie Stark, Neal Pattman, B.B. King, Henry Townsend, Hubert Sumlin, Lazy Lester, Gatemouth Brown, Honeyboy Edwards and Pinetop Perkins.  As with “Hit ‘Em Back,” proceeds from that project were, and are still, donated to the Music Maker Relief Foundation.

Shemekia is featured in the cover story of the current issue of Living Blues in which she is quoted as saying “I don’t want my music to come from a place of anger because when it does, no one hears you. Let’s educate; let’s open people’s eyes; why can’t we be united?”

Kenny Wayne Shepherd considers himself a Shemekia Copeland fan of the highest order, asserting, “She’s the real deal, the modern-day Queen of the Blues. She took the bull by the horns when she said, ‘Let’s do this!’ and ‘Hit ‘Em Back’ was the result. We were really motivated to finally making the great music we had long hoped to make. It’s such a positive, affirmative message that everybody – Shemekia, Robert, Tony brought their A-game to the studio that day.  When you’re in a room so full of talent like that, you elevate each other. You can hear it on this track.”

Purchase/download  link for “Hit ‘Em Back”