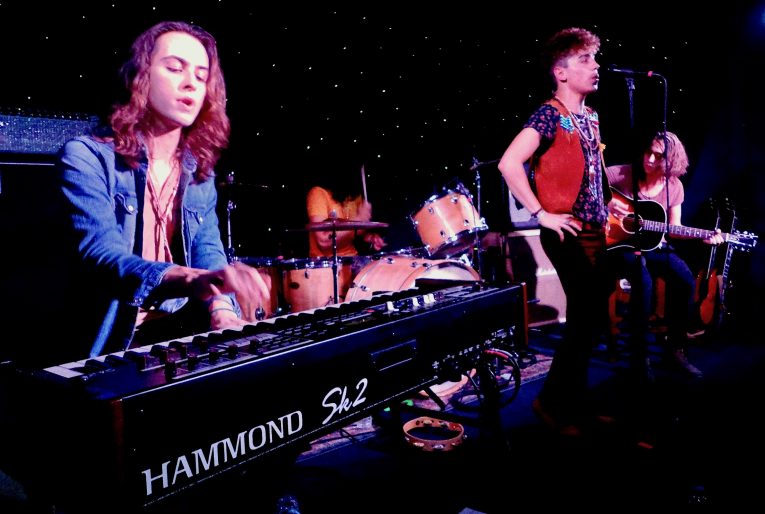 Greta Van Fleet made their way to the Pittsburgh area on Thursday, October 5, 2017. The band played to a packed room of devoted fans at Mr. Small’s Funhouse. Their twelve-song set included material from their current smash EP, Black Smoke Rising, plus previews of songs from their next two EPs.

After a strong opening set by the Glorious Sons, the audience was primed and ready for Greta Van Fleet, who walked on stage wearing classic 70s retro-hip attire with ‘we’re-genuinely-happy-to-be-here’ smiles. From the start, the love was mutual between the band and their fans. It was obvious that when they took the stage, there was no place else they’d rather be.

Vocalist, Josh Kiszka, greeted the enthusiastic crowd before guitarist, Jake Kiszka, launched into the opening chords to, “Talk on the Street,” which I learned could be a single from their next EP. Propelled by Sam Kiszka’s constant, pulsing bass and Danny Wagner’s crashing, frenetic drumming, Jake ripped his way through this up-tempo tune with ferocity. As Josh cut loose with his signature vocal prowess, we knew we were in for an amazing show.

Fans (like me), who were anxious to hear their first EP performed live, didn’t have to wait long. Their second song, “Black Smoke Rising” was one of those memorable concert moments, seeing them recreate the magic of the tune right before our eyes.

GVF performed more unreleased material, such as “Edge of Darkness” and “When the Cold Wind Blows,” which were further examples of what talented songwriters and performers these guys are. Although they range in age between 18 and 21, which continues to amaze me, their musicianship and compositions already seem mature beyond their years.

“Flower Power” was another impressive live recreation of a destined-to-be-classic track from Black Smoke Rising. Danny Wagner’s sensitivity as a drummer had everything to do with the dynamics of this song working onstage. Sam Kiszka switched from bass to Hammond SK2 organ for this song, playing the long, beautiful extended solo at the end. That led to more soulful keyboard work on, “You’re the One,” with Jake switching to acoustic guitar.  The following song, “Evil,” was a Howlin’ Wolf cover, which packed a venomous, blues-rock bite. It proved a good fit for the band.

“Lover, Leaver, Taker, Believer” was the night’s closer. In a catalogue full of riff-heavy gems, this one stood out as a treasure all its own. The chorus of the song was unique in that it involved those punchy, dramatic stops, allowing Josh to growl, “lover… leaver…taker…believer!” before the band fell back into the song like an avalanche of sound.

GVF quickly returned for an encore. Jake’s opening guitar riff intro to “Highway Tune” rang out to roars of approval from the room.  After an hour and a half of belting it out, Josh (whose voice was so powerful that he had to constantly back off from the mic) still sounded fresh, strong and ready to kill it, which he did.

The similarities between Greta Van Fleet and Led Zeppelin, and more specifically, between Josh Kiszka and Robert Plant have been a hot topic of discussion in the rock music world. It’s easy to hear one of their major musical influences but they have (very successfully) used that influence as a jumping off point to develop into their own, unique entity.

The finale, a version of “Safari Song,” ended with a triplet-heavy (and yes, an arguably very John Bonham-ish) drum solo that left it all on the stage.