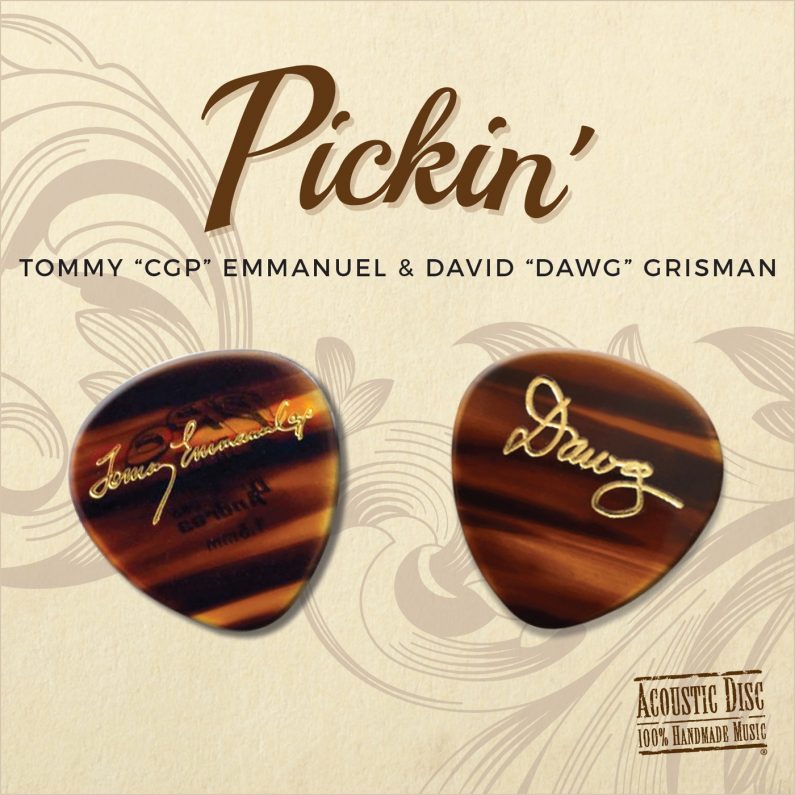 It’s exciting to review two preeminent musicians in their first-ever collaboration, Pickin‘, to be released on November 3, 2017, on Acoustic Disc. Tommy Emmanuel shows why he has been named one of only five Certified Guitar Players (CGP) by the late master himself, Chet Atkins, with his mixture of Jazz, Blues, Bluegrass, Folk and Rock. David “Dawg” Grisman continues to be the premiere player of Dawg Music with his unique combination of Bluegrass, Jazz and Folk on the mandolin.

The pair have never played together before, but with almost 100 albums between them, they understand how to put together a record that their fans will listen to over and over. Music lovers and musicians of all genres will enjoy the music created by these two and will be amazed at the combined talent of the duo and how they make intricate music look easy.

Emmanuel and Grisman complement each other well in “Cinderella’s Fella.” The beginning has an old movie soundtrack vibe before switching to a full sound that highlights Tommy’s distinct fingerpicking style.

The next song, “CGP & Dawg,” written specifically for this pairing, is a jam that shows why Chet Atkins bestowed the honor of CGP upon Emmanuel. With a thumb to play one line and fingers to play bass, chords and melodies, his dexterity is astounding. Tommy and Dawg take turns trying to out-pick each other in this unforgettable arrangement.

“Farm & Fun Time” elicits thoughts of a rural family going into town on the weekend as the light-hearted music soothes any residual cares from a hard work-week. Tommy’s snare-brush technique creates an additional texture. The laughter between the two musicians is contagious and shows how well they mesh.

Dawg’s intricate mandolin notes on “Newly Wedding” feeds the soul. Tommy’s virtuosic fretwork has the sound of an entire string band backing Grisman’s touching composition in one of many highlights on Pickin’.

Emmanuel’s sustaining notes offer a tease as to what is coming next. He switches gears into an up-tempo version of “Sweet Georgia Brown” with individual notes in between the two-finger harmony. Dawg (the nickname given to him by Jerry Garcia) picks a blistering mandolin riff.

“Standing Rock” is another new song that sounds like an entire blues band. Grisman battles it out on the mandolin while Emmanuel plays lead, melody and slaps the guitar body for a percussive effect. The level of talent shows through once again.

Emmanuel takes the lead in “Tipsy Gypsy” with a beat that gets you out of your seat. He plays three notes at once with his Travis picking style, (named for the great, Merle Travis.) The laughter between the two again reveals how much fun they have when playing together.

“Tracy’s Tune” is quite personal to Dawg as it’s an instrumental love letter to his wife. It’s both subdued with prolific picking–a true testament of talent. Each master musician plays lead while the other complements him with backing notes that mesmerize.

The penultimate song, “Port Townsend Blues,” is a jam that would be a great closing song for a live concert. Dawg’s nimble picking grooves along with Tommy’s finger play that emulates an electric guitar’s tremolo system with his harmonic progressions. Saying, “It rocks,” is an understatement.

“Pickin” is an album you’ll want to add to your collection.

For more information on Pickin’, Tommy Emmanuel and David Grisman: