Gig Review: The Blues is Thriving Thanks to Buddy Guy and Special Guest, Quinn Sullivan 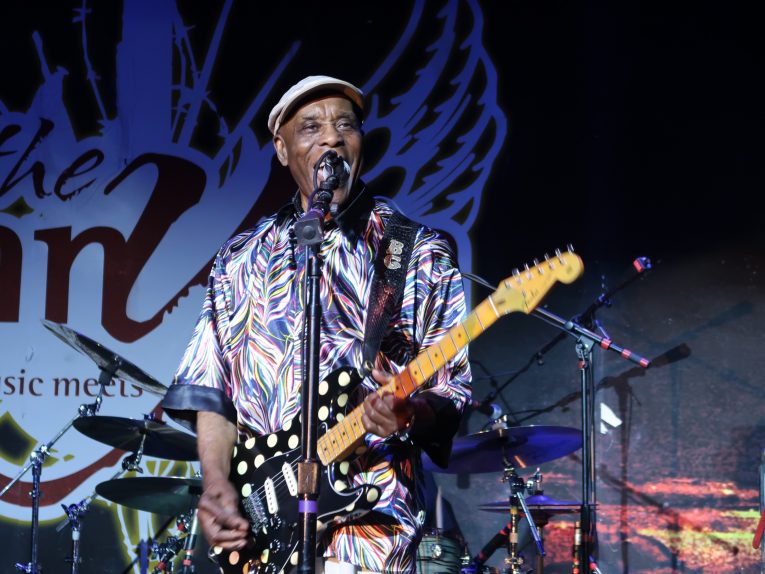 Not known to everyone, show opener and guitar prodigy, Quinn Sullivan, who at 19 years old has been playing with Buddy Guy since he was eight, appeared on stage with Guy’s band. Fresh faced and looking shy of 19, Quinn introduced himself and thanked Buddy Guy for having him. PRS Strat in hand, Quinn grabbed that stage and owned it with “Lifting Off” from his recent album, Midnight Highway. I’d heard him play a few times so I knew of his virtuosic guitar chops. What threw me was his voice. In full command and with great tone on this rock-ish song, Quinn and the band nailed it.

And then came his guitar solo.

Any doubts the audience might have had about the young opening act were dissolved as this guitar slinger smoked riffs and solos like a seasoned pro. Well, he is one. He’s been touring half his life. Yes, that’s right—he began on stage with Buddy Guy while in middle school and then with BB King, Eric Clapton, Derek Trucks and more. Just watch one of his videos and you’ll see what I mean.

After a few songs from his album, Quinn played an impressive “Little Wing.” With Tom Hambridge on drums (a killer drummer, producer, and songwriter for both Quinn and Buddy Guy) Quinn played beautifully and sang with power and soul. Comparisons to Eric Clapton aside, this is one young musician on the rise with plenty of support from Buddy Guy and others. It takes a village in the music business as well. 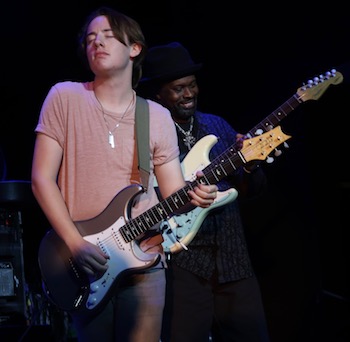 After a short break, the Blues Master himself, Buddy Guy appeared, who at age 82 shows no signs of slowing down. His latest album, The Blues Is Alive And Well, has ushered in a world tour through 2019. Buddy Guy has won eight Grammy Awards, 23 W.C Handy Awards, and was inducted into the Rock and Roll Hall of Fame.

This was no ordinary concert. It was so much more than seeing one of the most electrifying blues guitarists with a stellar band perform to a sold out crowd on a Sunday night. Sure, we were there to witness one of the best blues musicians ever but the show was also about Buddy Guy’s dialogue with the audience, sharing bits of blues history, personal stories about his life growing up in rural Louisiana. It was the way Buddy Guy opened a window to his soul, as if we were sitting in his living room, that made it so special. And he did it with humor and personal connection with the people who came to see him live.

Locking into a tight groove right from the start with “Damn Right I’ve Got The Blues” from Guy’s seventh album for which he won a Grammy Award, Guy and the band floored the audience with this tune. Tremendous energy and groove, the Canyon Club was rockin’.

A smokin’ solo by guitarist Ric “Jaz” Hall blasted the audience to their feet. Buddy Guy knows how to pick ‘em. Immediately after Hall’s solo and the song ended, Guy took a moment and scanned the audience with a big grin. He had us, and he knew it.

And that’s the way it went for the next hour and a half. A spellbound and adoring audience and a joyful, funny, and extraordinarily talented Buddy Guy at the helm.

During songs like “Hoochie Coochie Man” Guy signaled to the crowd to sing on certain phrases. Timid at first, we muddled a weak response. Guy cracked a joke about our attempt and told us to try it again. With this kind of good humor and interaction, it was as if he was ribbing good friends.

Before the next tune, someone from the audience shouted out, “We love you Buddy.”

Guy’s face lit with a big smile. “I love coming to California. I wish the world felt the way you do.” And he said a few words about the discord in the world and the importance of love.

Keyboard player, Marty Sammon, played an elegant call and answer with Guy on “She’s 19 Years Old.” This was not just any musical conversation. It was playful and fun and showcased Guy’s monster guitar chops and Sammon’s on keys.

Throughout the night, Guy shared personal insights in between songs, much like offering drops of wisdom or sharing secrets. He has a magical way of communicating something important with a childlike or authentic delivery. And when his playful side emerges, you’re almost certain he’s having the time of his life performing songs like “Boom Boom Boom,” “Got My Mojo Working” and “Cheaper to Keep Her,” and more. There’s humor in the way Guy performs these blues classics, and he plays off of them with physical antics.

Towards the end of the show, Guy and the band played the funky, “Slippin’ In” off his album of the same name, which also won him a Grammy. Guy continued to sing and play his signature licks as he walked down the steps from the stage and into the crowd. Everyone in the room was standing now, eyes glued to this outstanding performer and we all sang with him and the band. That in itself was pretty powerful.

Back on stage, Guy shared interesting pieces of blues history about Muddy Waters, Junior Wells and others as if he were talking to old friends. This is part of the magic of Buddy Guy’s show. The stunning musicianship combined with just plain great songs is a given, but the personal nature was not lost on me.

“Strange Brew” brought Quinn Sullivan back on stage and he played a truly beautiful solo and riff with groove. He and Buddy Guy then faced each other and played off one another’s notes in a way that can only be described as amazing. They really have fun together.

For more information on Buddy Guy and Quinn Sullivan: