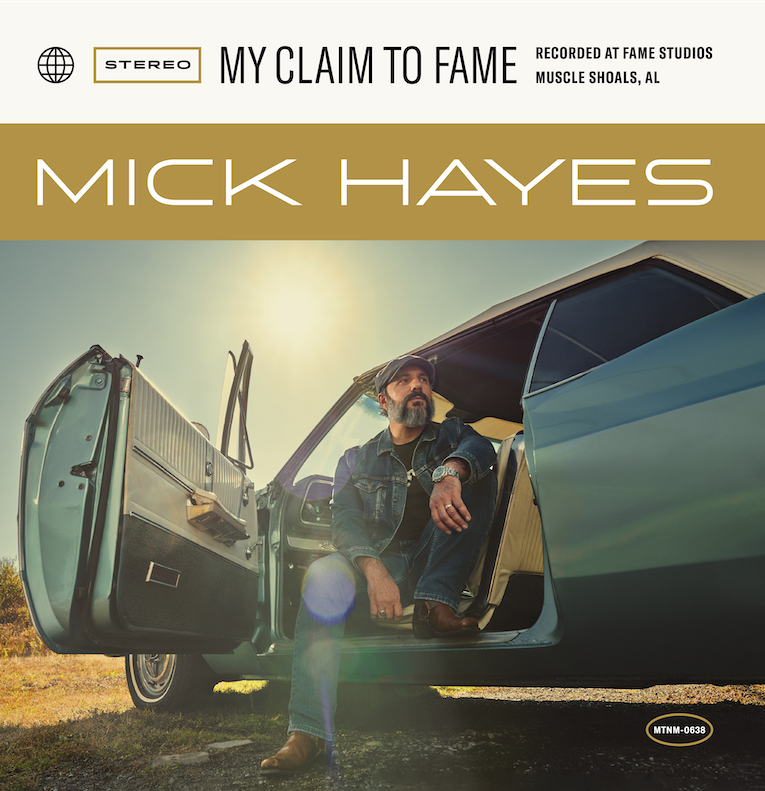 Guitarist/vocalist Mick Hayes brings his lifelong love affair with the Muscle Shoals Sound to its full fruition on his new album My Claim To Fame. The set comes out May 29th, 2020 on the Move the Needle Music label and was tracked at the legendary FAME Studio in Muscle Shoals, Alabama. Hayes recorded in the same room that captured innumerable epic sessions by blues, soul, and rock superstars like Aretha Franklin, Wilson Pickett, Duane Allman, The Rolling Stones, Etta James, Joe Tex, Clarence Carter, and countless others.

Mick co-produced the record with engineer John Gifford III (Gregg Allman, Shawn Amos) using all the vintage equipment the two of them could find and a hot session band whose members can claim stints with heavyweights including B.B. King, Bonnie Raitt, Ray Charles, Bobby “Blue” Bland, Gladys Knight, and Levon Helm. The resulting songs are a perfectly-executed tribute to the great soul music of the mid-20th Century as well as a big blast of greatness from one of today’s finest roots music artists.

Mick Hayes and his band have spent the last decade playing up to 200 festival and club gigs a year and have opened for Duke Robillard, Samantha Fish, and Delbert McClinton. He’s loved the Muscle Shoals Sound since he was a record-collecting young man in upstate New York hunting down sides by Ray Charles, Aretha, and Solomon Burke. It was a dream come true for Hayes to find FAME to be much the same as it was back in the day, still vibing on the same green carpet, paneled walls, and older equipment that were present when history was being made there. The assembled musicians were also a dream machine for Hayes and added a lot to the identity of the songs. “Recording at FAME with those players was like being at the best potluck dinner ever,” he said, “I didn’t have to do too much except get out of the way!”

Hayes starts My Claim To Fame with the slick and soulful “Sweet To Me,” an upbeat that lives somewhere between The Swampers and Steely Dan. The song is a declaration of true love built on a big groove and packed full of happy horns and positive attitudes. Hayes is a good enough singer that he could get away without playing guitar if he so desired and his warm vocal tone and easy sense of phrasing shine here brightly. “Hand Me Down 45s” is next and again digs into the vault of vintage soul styles for a superb pocket that supports a tale about the old 45 RPM singles passed down to Hayes by his folks. He takes a brief guitar solo that features some sweet double-stop and single-note work but has the wisdom to keep his guitar chops in check and let the song and band carry the day.

“Way Too Hard” is a simmering R&B ballad with a heartbreak theme and contains some of Mick’s smoothest vocal and guitar takes on the album. He has an intuitive feel for making his playing and singing work in the context of this large band and delivers just what’s needed where lesser talents would overplay. Soul music is an ensemble style for the most part and is much more about vocals and grooves than the instrumental heroics found in the blues. You can tell Mick knows this in his bones and his willingness to be part of his own band and not simply blast over it is glorious.

“Political Funk” is Hayes’ social commentary track and he lets his messages fly over a heavy mid-tempo feel with a tight, dynamic beat and cool chord changes. His ideas are interspersed with killer horn and organ support and the rhythm guitar part holds the whole thing down until Hayes opens up on another short, tasty solo. “Autumn Romance” is the change-up pitch of the album, taking a detour out of Alabama and into the classic Philadelphia soul style. Hayes absolutely slays the vocal and the band lays down a huge pocket that gives him the space to do it.

Mick Hayes is an obvious master of his craft and My Claim To Fame is an exercise in recalling all that’s great about music from start to finish. His playing, singing, and songwriting are better than ever and his session band is beyond brilliant. Soul fans take note: this one’s for you.