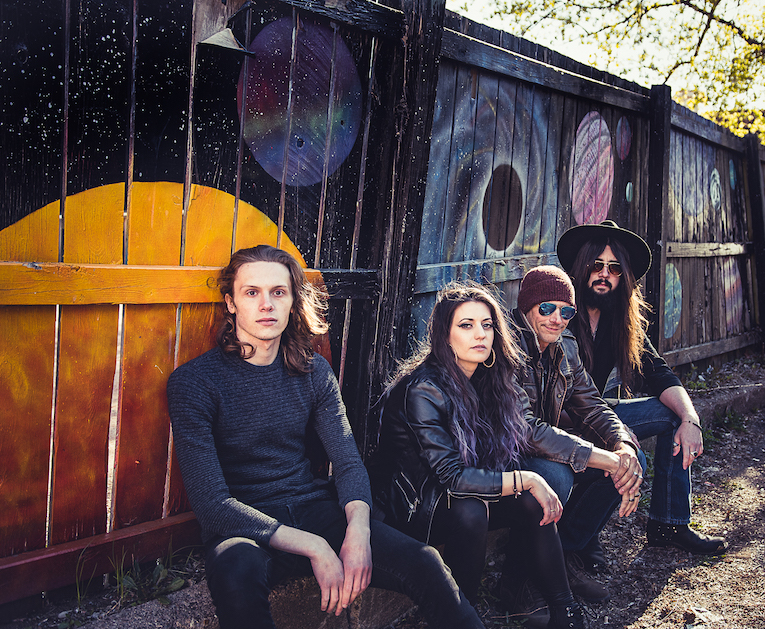 “Expect delicious spadefuls of Heart, Led Zeppelin and Janis Joplin with this gnarly blues rock number from Wisconsin rockers Bourbon House. Spearheaded by smoky-yet-strident siren Lacey Crowe, it’s the kind of music that doesn’t know whether to flirt with you or kick you in the teeth – and we mean that in a good way.”

That’s how Classic Rock magazine described the music of Bourbon House when their last single, “Devil on My Heels” was released in 2019. Flash forward to 2020 and the sounds of the Wisconsin band–Lacey Crowe (lead vocals), Jason Clark (guitar), Ryan Sargent (drums) and Johnny Pries (bass)—has only picked up with a little more blues and a whole lot of rock & roll.

Today they released the video for their latest single, the hard-hitting and gritty rock song “Too High to Care,” which was self-released April 17 and is now available on all digital formats and the video can be seen on their official YouTube page. The song was recorded and produced at the legendary Rustbelt Studios in Detroit, MI with engineer Steve Lehane (The Black Dahlia Murder, Citizen Zero), it’s the first of five new tracks scheduled to be released this year.

“’Too High to Care’ is a very free-spirited, zero apologies, own-your-shit-proudly kind of song,” declares lead singer Lacey Crowe. “I think the video reflects that. We’re a rock band having fun, setting up in random places during a massive lockdown and performing for three people hanging out on their porches across the street. You’re basically coming along for the ride with us and watching our 13-hour video shoot day unfold.”

During that shoot, they stumbled on a small freezer inside the abandoned building where the first sequence was filmed. Inside that freezer was a bag of bones and the band and crew were convinced they were human remains. After calling the sheriff to report the finding, it turns out that they were most likely chicken bones. Says Crowe, “Or at least a huge chicken that may have had human teeth!”

The sound of the Midwestern small town quartet Bourbon House’s riff-based groove rock has been described as “modern rock with a hard ‘70s blues-rock edge.” As Crowe likes to describe their music, “It’s straight-up, timeless rock and roll.”

They were featured on the magazine’s compilation CD sold with every issue at the time when “Devil on My Heels” was released. With the aid of influential rock radio DJs around the world, including an endorsement from Eddie Trunk on his weekly SiriusXM radio show, the single quickly climbed the underground rock ranks, reaching #1 on the independent charts in Australia and #2 in the U.K.

While Bourbon House has performed extensively throughout the Midwest and beyond, including club shows in Chicago, Minneapolis, Milwaukee, and most recently in Nashville with supporting slots for Crobot and Jasmine Cain, an extensive 2020 tour has been postponed due to the efforts to curb the spread of COVID-19. With a live performance described as energetic and dynamic, with power vocals, explosive guitar riffs and a tight and groovy rhythm section, Bourbon House is using this off-time to rehearse and create a live show bigger and better than before.

Watch “Too High To Care”