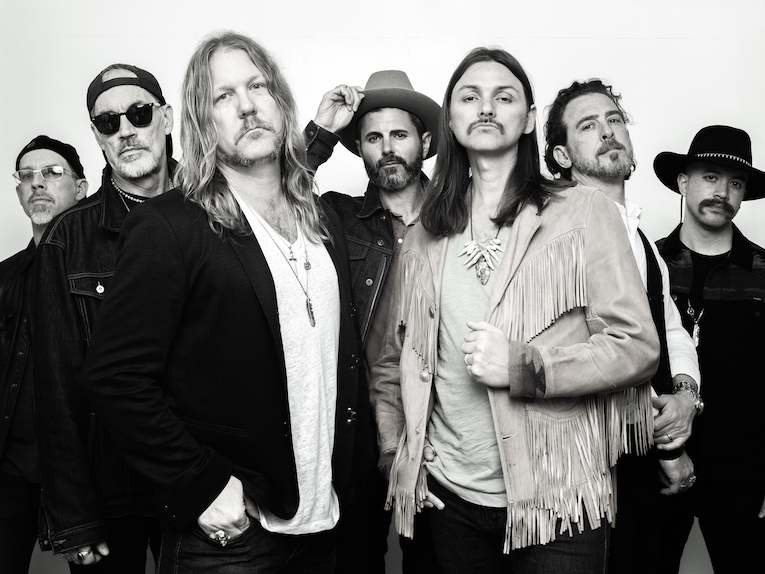 Today, The Allman Betts Band are releasing the second single “Pale Horse Rider” from their sophomore full-length studio album Bless Your Heart, out Aug 28 via BMG.

“‘Pale Horse Rider’ was a really fun one to write,” Devon Allman, told Rolling Stone Country, “Duane had this almost vertigo-inducing descending melodic pattern that was so unique. Once I started the lyric about a man feeling so lost and isolated with the world out to get him, the story just kind of wrote itself. The Wild West seemed like the perfect to setting to tell the tale.”

“It felt so satisfying to capture that beautiful entanglement of guitars. And, with Devon’s haunting story, it’s a new texture of our band that we get to showcase on this record. We’re really excited to share it with everyone,” added Duane Betts.

“Magnolia Road” is the tie-dyed contender for summer festival favorite. A semi-autobiographical lyric shared by Betts and Allman, ironically this is the only song on the album with band collaborator Stoll Vaughan as its sole author. Vaughan wrote the song alone, though namechecking detailed parts of Betts’ and Allman’s life, respectively. Musically evokes the group’s affection for The Band and the Grateful Dead.

The Allman Betts Band are thrilled to announce that will be making their national television debut on CBS This Morning tomorrow, July 25 at 7AM EDT / 4AM PDT. Click HERE for local listings

The Allman Betts Band are set to release, Bless Your Heart on Frida August 28. Over a week’s time, they recorded 13 songs at the legendary Muscle Shoals Sound Studio on 2-inch tape, just as they did with Down to The River. In addition to the time in Muscle Shoals, Bless Your Heart saw additional tracking in Memphis and St. Louis. Within the eclectic repertoire are the familiar: stacks of guitars; electric, acoustic, and slide; a throttling, percussive rhythm section. And the fresh: Bassist and singer Berry Duane Oakley’s ABB vocal debut on his original song (“The Doctor’s Daughter”); Allman’s baritone vocal channeling Johnny Cash (“Much Obliged”); Betts extending the legendary family legacy of incendiary instrumentals (“Savannah’s Dream”). They tapped friends, as well, such as Jimmy Hall, Shannon McNally, Art Edmaiston, Susan Marshall, and Reba Russell for guest contributions. Then, emerged with an undeniable achievement of an album (what sophomore jinx?) worthy of its winking, unabashedly Southern title.

“I think we definitely challenged ourselves, pushed ourselves artistically, and widened the spectrum on all levels. We wanted something that was a little more sweeping. A deeper experience,” says Betts. Says Allman, “I hope what people hear on Bless Your Heart is a band that’s having a love affair with being a band.”