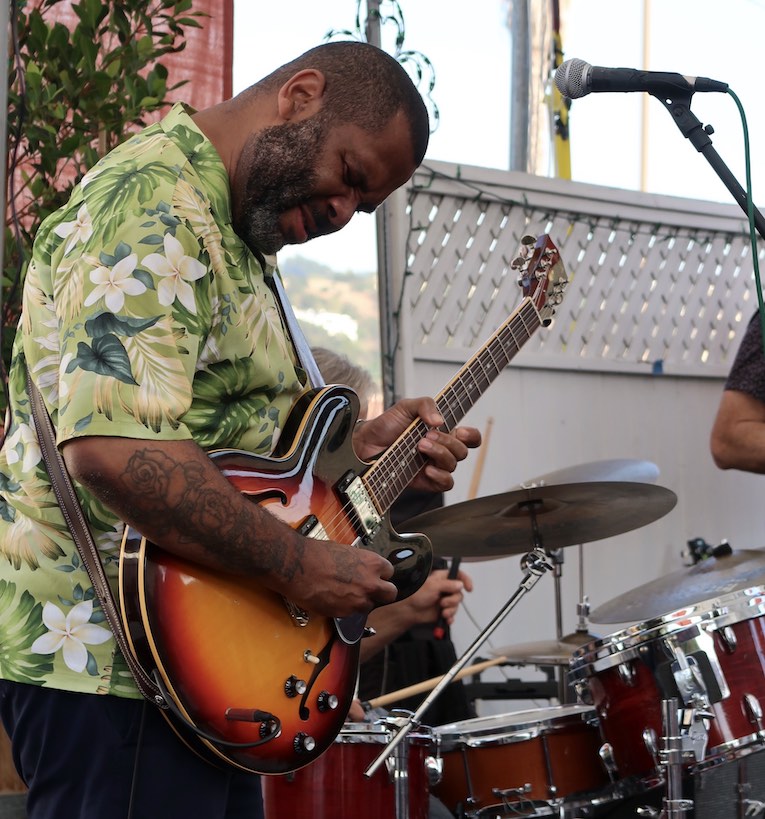 Bustling into the back patio of the Pineapple Hill Saloon in Sherman Oaks, CA, at 5pm on May 30, 2021, we couldn’t wait to see Kirk Fletcher, known as one of the best blues guitar players in the world. This was the first time in over a year that we’d seen any live music because of the pandemic, and who better to reawaken the blues spirit than the great Kirk Fletcher, the show presented by Cadillac Zack.

After showing our vaccination records at the entry, we were led to our seats on picnic benches in the second row from the stage. The area was loosely packed with fans starved for a concert, for the blues, for a show featuring Kirk Fletcher, former lead guitarist for the Fabulous Thunderbirds, a five-time Blues Music Award and British Blues Award nominee.  Fletcher’s sixth and latest solo album, My Blues Pathway, was released to critical acclaim September 2020 and is twice nominated for a 2021 Blues Music Award.

Seated next to other Kirk Fletcher fans, we shared how thrilled we were to be back, grateful for blues promotor Cadillac Zack who brings in the best musicians from all over the world to perform in intimate venues. The area was a temporary setup outside the club, given the Covid-19 restrictions in Los Angeles, a roped off area with lattice screens and rust-colored canopies overhead.

With Gibson 345 in hand, Kirk Fletcher arrived with bass player Randy Bermudes and drummer Dave Kida. About 100 of us clapped and whistled for Kirk and the band, and you could feel the energy climb through the crowd. Fletcher warmed up with a couple of songs from My Blues Pathway and his previous album, Hold On (2018.) The audience was alive with excitement. Had it really been a year and a half since we’d seen live music?

When Kirk gave in to soulful and compelling guitar solos on jazz-infused blues classics, people hollered for Kirk’s stunning performance. Truly, he is one of the best players I’ve ever seen. Soulful vocals and mastery on guitar soothed the yearning in all of us who’d been cooped up in our homes, waiting for the pandemic to pass.

Fletcher killed it. On every single song or jam. Vocals, guitar, everything. Yelling in praise, we raised hands high in the air, clapping along with other blues devotees, loyal followers of the guitar master himself. When he dug into the groove, setting his fretboard on fire, the audience was on their feet. Those beside me yelled out to Kirk, in awe of his skills. This is what we had come for.

About 20 minutes into his set, Kirk introduced his longtime friend and bandmate from The Mannish Boys, Franck Goldwasser (Paris Slim.) With his Guild gold top guitar, Franck joined the band and he and Kirk exchanged a few pleasantries before launching into a blues number. New to me, I soon learned that Franck Goldwasser is a blues guitarist, singer, songwriter originally from Paris who played and recorded with Lowell Fulson, Percy Mayfield, Jimmy McCracklin, Robert Cray, Sugar Ray Rayford, Joe Louis Walker, Nick Moss, Kid Andersen, Charlie Musselwhite and more.

Fletcher and Goldwasser have both performed and recorded with many of the same revered blues greats. As they broke into the first jam, you could feel the synergy between them. Both were right at home with each other, trading licks and musical conversations on their guitars and with their vocals. Without a playlist, this was an impromptu jam, and both musicians came up with songs to play on the spot.  When professionals like these get together, there isn’t a second wasted. And with a superb musicians like drummer David Kida and bassist Randy Bermudes, you can imagine just how tight this band was.

With gritty, soulful vocals and an old-school blues guitar style, Goldwasser was a nice compliment to Kirk’s sparkle and shine. Both of them were having a blast with the band and ran through a string of blues classics by legends, including one by Freddie King.

Around the edges of the roped off area, stood renowned musicians and producers, all there to hear Kirk Fletcher but standing back to simply enjoy the show. Everyone had the best time, as if the music had never stopped.

Thanks to Natasha at 1AnitrasDance for the video.
Watch ‘I Gotta Right to Sing the Blues”