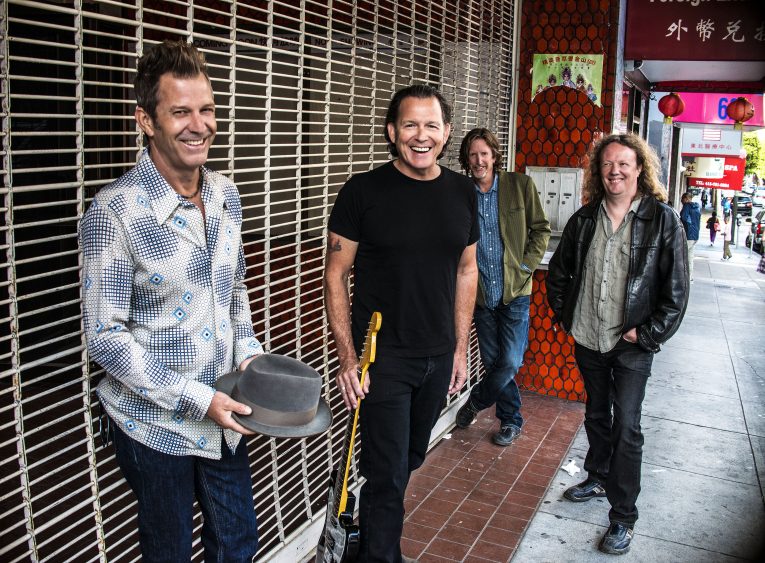 Tommy Castro & The Painkillers have a new album, Stompin’ Ground, released on Alligator Records, Sept. 29, 2017. And it’s 12 tracks of soul-blues-stompin’ fun. But hang on, there’s meaningful lyrics and a super-tight band too. Tommy Castro himself is one fluid and clean guitarist and his soulful blues vocals are some of the best I’ve heard. With tasty guitar work, excellent musicianship, and feel good rockin’ tunes, this album has a lot goin’ on.

What a blast of fresh air.

I came late to this blues party as I hadn’t heard of Castro before Stompin’ Ground. He and his band show why they are one of the most popular on the blues-rock scene. With hundreds of live shows, 16 previous albums, Castro and his band are seasoned, excellent players who are having a musical blast. With each song, you can hear just how rooted Castro is in the music. There are certain musicians who merge with their music, as if they’re living and breathing it, and that tends to communicate a certain soulfulness. That’s Castro, hands down.

Tommy Castro has won six Blues Music Awards, including the prized, BB King Entertainer of the Year award. No surprise there.

Castro and his band let loose on this collection of inspired songs that blend ripping blues rock with distinct hints of funky soul. This is a band with a social conscience, and Castro’s lyrics are often insightful without hitting you over the head with the message. Combine that with top tier musicianship, and you’ve got something different, something fresh.


As I listened to Stompin’ Ground, I jumped to my computer to find out their tour schedule and honed in on a date in my city. I wouldn’t miss this band live for anything. I know what I’m in for and so will you when you listen to the album.

“Nonchalant” kicks off the record with high-energy blues rock and Castro’s expressive vocals. With a horn section, organ, and backing vocals, this track has a distinct soul flavor. Castro’s guitar riffs flip it into 2017 with contemporary zing.

“Blues All Around Me” is a standout track, with an in-the-pocket rhythm section. This is a toe-tapping, danceable tune. It opens with a catchy bass rhythm line, which leads to Castro’s syncopated vocals. The horns add punch in all the right places. This is funky, feel-good music with searing guitar and sax solos.

“Fear Is The Enemy” gets a little more rock with great groove. This song has something to say about fear and its effects on relationships. Castro brings it, syncing his vocals right in time with the rhythm. And talk about a stinging guitar solo with great tone. This is the mark of a seasoned guitarist. The backing vocals infuse heightened urgency to this track.

The fourth track, “My Old Neighborhood” opens with whining, blues guitar licks, and unfolds a story about Castro growing up in his hometown. He sings a story that is so descriptive and visual, it was as if I was there. The sax fills, acoustic guitar, and piano, ground the song with natural tones. Castro’s vocals are reminiscent of Otis Redding but with more of a contemporary approach.

Mid-album is the song, “Love Is” that starts with a funky bass solo and guitar riff. This tune has hit written all over it. With syncopated rhythms, just beautiful guitar solos, Castro sings it with an intensity the song deserves. The guitar riffs remind me a little of Robert Cray.

“Rock Bottom” is a rhythmic blues shuffle that you could dance all night to. The call and answer between the two guitars just rocks.

I have to mention Danielle Nicole’s voice on “Soul Shake.” What a dynamic vocalist. She harmonizes with Castro on the verses and takes the lead in places. My goodness, she certainly adds dimension to this tune with her vocal chops.

If you’re ready for a swampy blues number then the closing song is for you. It was for me. “Live Every Day” has a breezy feel with plenty of impressive harmonica by Charlie Musselwhite. I mean, really, who better to have play harp on your album?

The take away from Stompin’ Ground is a top-quality blues blast. You won’t be disappointed.

For more information on Stomping’ Ground and Tommy Castro & The Painkillers: