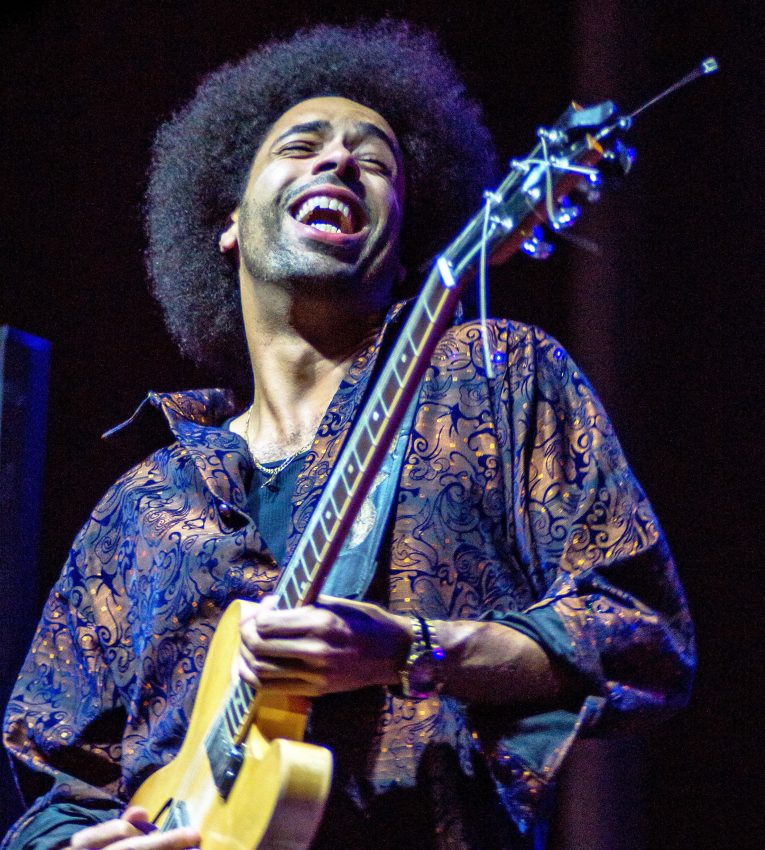 Pick Your Poison is the sophomore album from contemporary blues guitarist, vocalist and songwriter, Selwyn Birchwood, out now on Alligator Records. The record seamlessly continues the momentum generated by Birchwood’s impressive 2014 debut, Don’t Call No Ambulance. So much so that if party blues isn’t already a genre, then Selwyn Birchwood just invented it – right from playful jazz-flute-led stomper, “Trial By Fire,” declaring the festivities via drummer Courtney “Big Love” Girlie’s militaristic drum rolls.

Thanks to some impassioned power-strutting slide guitar, that party spirit segues effortlessly into second track, “Even the Saved Need Saving,” which really kicks off the celebrations. With high-pitched slide guitar cutting through the mix, the striking melody offsets layers of brass instrumentation and Birchwood’s baritone vocals. As Huff Wright’s masterful bassline confidently walks, skips, and jumps, it builds an exciting foundation that contrasts starkly with the syncopated minimalism of third track, “Guilty Pleasures.”


With a deep, warm resonance that comes all the way from the boots, the dulcet tones of Birchwood’s vocals give the impression he’s walked a mile or two in Joe Cocker’s shoes. And Birchwood’s guitar playing is equally hearty and seasoned, rightly leading Rolling Stone to declare Birchwood “a powerhouse young guitarist and soulful vocalist.” Mid-album track, “Are Ya Ready?,” perhaps best showcases that impressive dynamism and dexterity; Birchwood’s soulful six-string licks start out by imitating saxophonist Regi Oliver’s melody, almost becoming part of the brass section before breaking out into freestyle blues-jazz shredding. In fact, on every track on the album, Birchwood knows exactly where his guitar should carry the song, and where it should sit back in the mix.

As a songwriter, Birchwood calls on a wide range of influences and styles to combine an eclectic, accomplished concoction that never feels disjointed. There are flashes of funk on “Corporate Drone,” snippets of ska on the eponymous track, “Pick Your Poison,” and rumbles of hard rock on “Haunted.” On the other hand, “Heavy Heart,” is a blues song as authentic and sincere as you’re likely to hear from a musician as young as Birchwood.

But despite that obvious deep understanding of blues music that belies his years, Birchwood doesn’t pretend to have all the answers. That’s evident on songs like “Police State,” where Birchwood muses over the complexities of tough topics like race relations, abuse of power, and the unglamorous sides of American history. And while his lyrics are frank and powerful, there’s no element of preachiness; with lines like, “How does this happen in the land of the free? Got us heated up, and mad enough, to protest it in the streets,” Birchwood somehow conveys both conviction and self-doubt, offering as many answers as he does questions.

Despite occasionally drifting into serious territory, Pick Your Poison never breaks the celebratory feeling. And in any event, what great party doesn’t eventually end up with sitting around talking politics? By the time “My Whiskey Loves My Ex,” Birchwood is back on the bourbon, jovially cursing a heartbreaker from his past through gritted teeth. That’s before the sombre jazz-lounge saxophones on “Lost in You” signal that it’s about time everyone finished up their drinks and headed home for the night.

An accomplished yet vulnerable work, Pick Your Poison is Birchwood’s salute to the good, the bad, and the ugly sides of the human condition. Through masterful musicianship, vocals, and songwriting alike, Birchwood skillfully balances technical intricacy with a good-time vibe. Here’s raising a glass to Birchwood keeping the shindig going.

For more information about Pick Your Poison and Selwyn Birchwood: