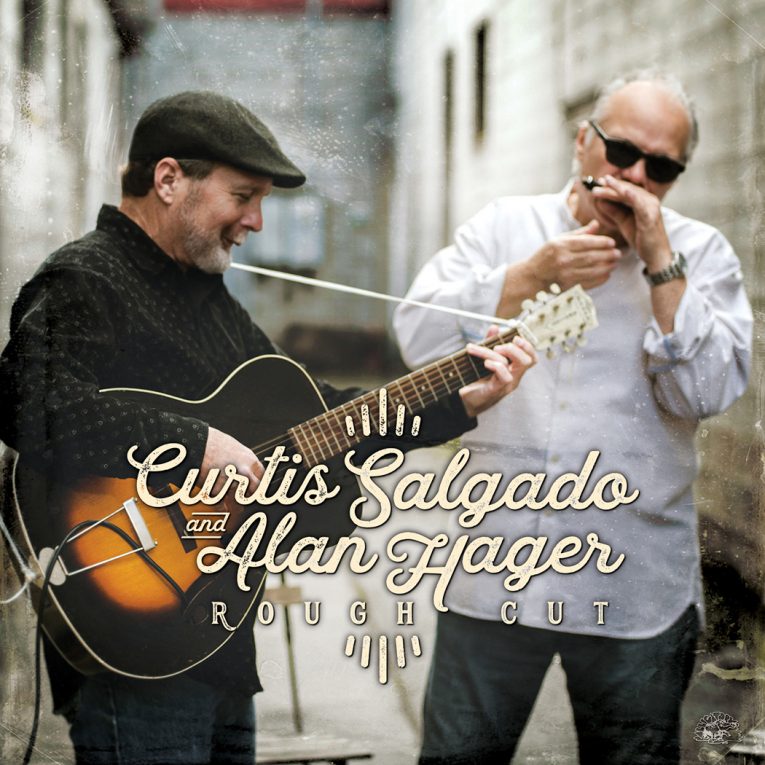 I can’t think of a better way to celebrate the New Year than picking up Rough Cut, the first album-length collaboration from venerable harmonica-man/vocalist Curtis Salgado and guitar-wizard Alan Hager, due out January 12th from Alligator Records.

There are some serious players lending a hand on this collection of six originals and seven well-chosen covers including Jim Pugh and his tasteful piano work, powerful guest vocals by LaRhonda Steele, Keith Brush’s low and anchored bass playing, and solid rhythms provided by three different drummers. That said, Rough Cut is really about the two guys in the title. Not just their own substantial separate talents, but their mutual connection and unquantifiable simpatico vibe.

Nowhere is this connection more obvious than on the opening original track “I will not Surrender,” a quiet guitar and harmonica workout, recorded in one start-to-finish live take, that is stunning in its power, in spite of its seeming simplicity. You can’t fake this kind of mojo no matter how good your ProTools skills might be, and when a guy who has survived liver cancer, lung cancer, addiction and by-pass surgery tells you he isn’t going to surrender, you believe it on a soul level.

The make-it-look-easy-when-it-isn’t vibe rolls into the next original tune as well. “So Near to Nowhere” is a fairly stripped-down song about the wrong girl at the right time, that still, in it’s quiet way, packs a bigger than expected emotional punch.

The mood lightens and the tempo quickens on the next couple of tracks. “One Night Only” is a sly, sexy honky-tonkin’ tale with plenty of swing. It is followed by the light-hearted fan favorite, “I Want My Dog to Live Longer,” which still manages to sound righteous and true.

The first cover tune of the album, “I Can’t Be Satisfied,” is next. Hearing these two masters tap dance so effortlessly across this Muddy Waters classic with such ease and dexterity shows how deeply they’ve lived this music. The same goes for Sonny Boy Williamson’s “Too Young to Die.” After the long guitar & harmonica intro the song seems to be about one thing, but the chorus carries a lot more weight when sung by a guy who has, more than once, looked The Reaper directly in the eye.

On their bare-bones version of Sun House’s “Depot Blues” Salgado gives Alan Hager plenty of room to showcase his traditional acoustic guitar blues virtuosity. Fittingly, a song about the depot is followed by the traditional blues of “Morning Train” which opens with a slow stomp, chant and hum before building to an up-tempo gospel-inspired finish. The rest of the band returns for a righteous take on Elmore James’ “You Got To Move” that features some sweet slide playing by Hager.

Salgado’s light-hearted ‘confession’ song “Hell in a Handbasket” still somehow carries more weight than you would expect as does the jaunty “Long Train Blues” that follows it.

The tone shifts back to serious with a dash of hopeful on “The Gift of Robert Charles.” This contemplative Hager original instrumental taps into and triggers memories both personal and collective. The tune takes its time and reminds you that you should too. Listen. Think. Remember.

The album closes with Big Bill Broonzy’s “I Want You By My Side.” It is a hopeful and bouncy choice for an album closer. Maybe Alan and Curtis wanted to leave us with the reminder that where there is life and love, there is always hope, no matter how steep the climb or heavy the blues.

Start 2018 off right: Put this album in your personal heavy rotation.

For more information on Rough Cut by Curtis Salgado & Alan Hager and to pre-order the album: