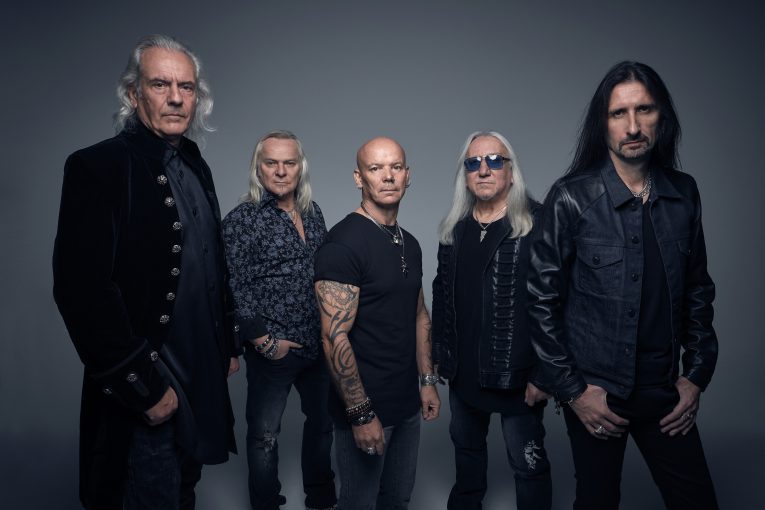 Bassist Davey Rimmer is the newest member of Uriah Heep, having joined in 2013. Rimmer is a self-taught musician, playing along with vinyl records such as Queen, Led Zeppelin, Deep Purple, and ironically, Uriah Heep. Known to its fans simply as “Heep,” the band was one of the early forerunners of marrying hard rock and progressive rock, and features a five-part vocal harmony attack that is unique only to Uriah Heep. The band recently released its 25th studio album, Living the Dream, that has been garnering rave reviews, and will soon kick off a lengthy world-wide tour in support of the new album. Rimmer was kind enough to talk to us by phone.

Kevin Porter: Thanks for taking the time and congrats on the new album, Living the Dream. It’s getting some great reviews and our readers have really liked it as well.

Davey Rimmer: Thanks. You always hope that people are going to respond to it, but we’ve gotten a really great response to the album so far. We’ve really blown away by it. You never really know. You do your best and hope it’s going to connect, and it’s connected so far.

KP: Yeah, so, it’s different than the previous album, Outsider. There are all sorts of different layers to it. What was the band’s thinking going into recording Living the Dream?

DR: We tour so much. I think with this album, we just focused on everything that is Heep. We wanted the real rock drive and vocal harmonies, but we also wanted to add some acoustic elements and piano. With this album, we had time to focus on what we really liked and what we wanted to do. I’d say Outsider was a bit rushed. We had a small window of opportunity to record the album – it was right in the middle of heavy touring. We didn’t really have much time to think about it, and then we went straight back out on the road. But this album, you know, we definitely had time to think about what we wanted to give the fans of Uriah Heep. We were just trying to give them a bit of everything because every Heep fan has their favorite era. Some might like the 70’s, some like the 80’s, and some like the 90’s. It’s nearly 50 years of music. It’s just trying to keep in mind all the elements and try to deliver it in one package. That’s what we tried to do on this album.

KP: I was blown away by the five-part harmonies. I don’t think I know any other bands that do that.

DR: Yeah, it’s been a Heep thing since the beginning. The guys are particularly good at arranging and they’ve been doing it for so long. It’s great and it sounds very powerful.

KP: You contributed to at least one song that I know of, “Grazed by Heaven,” that you co-wrote with Jeff Scott Soto. I understand you’ve very proud of it and rightfully so. Tell me more.

DR: I’ve been in the band for about six years, so I suppose you could call me a bit of an outsider (laughs) in a good way because I was a big fan of the band before. I also have my favorite eras of Heep. I wanted to write something that was about all the power of the White Sleeper album and some of the early 90’s stuff that that I particularly like, like Sonic Origami and Sea of Light. I wanted to get a real driving, hard rock song. I put together the music, but was struggling a bit with the melody. I’ve been a fan of Jeff for years – all the bands he’s been in – Talisman, Soto, Yngwie Malmsteen). I asked Jeff: “Would you write with me?” and he said: “Send it over.” And he loved it. He said, “Try this…try this…” and it turned out to be perfect. The band loved it as well, and they did an amazing job in recreating it in the studio. I couldn’t be more pleased. I’m very happy with the ways the fans have reacted as well. Because that’s what I was trying to do – to write a song that every Heep fan would go “Wow, that’s got that real Heep vibe.” With the help of Jeff’s amazing lyrics and melody, I’ve managed to fulfill a dream.

KP: Do you think you might do some more writing with Jeff?

DR: I’ll definitely do some more writing with him for the next Heep album.

KP: Speaking of the next Heep album, given how fast you guys crank these albums out, it’s probably not that far away.

DR: The guys and Mick (Box), in particular, writing and playing music is their life, so there’s definitely going to be another album. We’re going to do a world tour with this one. Jay Ruston (Anthrax, Leonard Cohen, Fall Out Boy) produced it and did an amazing job. He’s a very talented producer. He became a fifth member of the band, really. He’s a real classic rock fan, and he had lots of comments and ideas on the sound of the album and the production. Jay was really an important part of Living the Dream.

KP: In my view, that is where it sinks or swims, the mixing process.

DR: Yeah, it can go either way. That’s why we chose Jay. We all had Jay’s resume, and I liked all the bands that he had worked with—just really great sonic sounds. I think it’s the best guitar sound Mick’s ever had. You can hear every instrument—it’s so clear, it’s got definition. It’s crystal clear and that’s exactly what we wanted.

KP: You’re doing this world tour. I know you’re doing Europe in the near future, if I remember correctly.

DR: Europe starts in a couple of weeks, well at the end of the month, the end of October, we start in Germany. Germany, Sweden, Norway, we finish, oh we do Russia. We come back to the UK in December and do a short British tour that leads up to Christmas, so we’ll be out for like two months. Then we have a break during Christmas time, and we go back out in January and February with France, Italy, and Japan. All systems go for the Living the Dream Tour. We’re coming to the States as soon as we can. We were recently in the states this past February for about three months. It was great to get back to America because we hadn’t been there for a few years and the response was great. With this new album, we want to get back there as soon as we can. The way it looks now, we’ll probably do European summer festivals and then go to America. As I say, we’ve got no plans yet, but we’re always working to get us over there as quickly as possible. Hopefully, we can do a package tour with another band—that would be perfect. It’s something we are working on now. We’ve got a few things going, so fingers crossed that it all works out.

KP: I know you were trying to do those things in the past maybe with Judas Priest or Deep Purple.

DR: We’ve done a few shows with Deep Purple and Priest in Europe. That has always been great, so hopefully we can get over to the States with either of them or some other band.

KP: Let’s talk a little more about some of the other songs on the album. So, the title track – “Living the Dream” – how did that come about?

DR: Mick and Phil came in with a demo. That’s normally how we work. They come in with a rough demo, and then we go into a room together and start to work it out. We were thinking of album titles and I think Mick suggested Living The Dream. For the band, it’s coming up to the 50th anniversary next year, we are really living the dream, still making music after all these years. Still making music that people want to hear and there’s still so much energy in the band. It was a perfect title for the song—it’s just a positive message, going for your dreams and eventually you’re living the dream, that’s the way it comes across.

KP: You mentioned you are coming up on your 50th anniversary. Do you guys have any plans for a big celebration?

DR: We are throwing some ideas around. I think we’re going to wait until the end of the year and then we’ll have a meeting and decide what exactly we are going to do next year. It will certainly involve promoting Living the Dream and maybe we’ll pull out some songs from the first album, maybe. It’s pretty hard because there’s 25 albums in 50 years, so you’d end up being on stage for four hours to play them all. Sometimes its difficult keeping all the fans happy. But it’d be nice to relive some of the early stuff and come right up to date with the Living the Dream album.

KP: I know it must be really tough writing a set list. There are obviously some songs that everyone knows and wants you to play.

DR: People on Facebook will ask me: “Davy, will you guys play this song or this song.” It’s really hard to play all the songs because it’s such a big catalogue and Mick, Russ, Phil and Ben don’t like to rest on their laurels, and they like to write new music. I think the new album proves that. We always play the old classic songs, but we will always want to put in a few new songs. We’re working on the set list now for the upcoming tour. There’s a couple of lists (laughs), and so we’ll have to go into a room and see what works.

KP: I want to thank you for taking the time to talk to us, and good luck with the upcoming tour and with Living the Dream.

DR: It was my pleasure.

For more information on Uriah Heep, their new album Living The Dream and their tour: