Interview with Rebecca and Megan Lovell of Larkin Poe 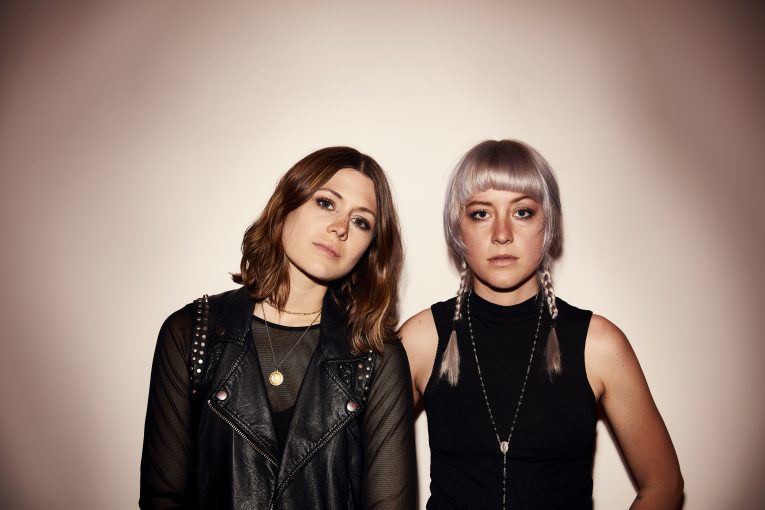 Rebecca and Megan Lovell of Larkin Poe are taking the world by storm. With their own brand of roots-rock, these singer/songwriters, multi-instrumentalist sisters have created a new sound that’s gritty and soulful, with flavors of their Southern heritage. Their first full length album, Kin, was released in 2014, their second Reskinned in 2016, and their latest album, Peach in 2017, which was nominated for a Blues Music Award. Their upcoming album, Venom & Faith will be released November 9, 2018, and it’s none too soon for fans of Larkin Poe.

Larkin Poe, complete with powerful and soulful vocals, beautiful harmonies, guitar, lap steel and more, celebrate modern blues and roots music in a unique and captivating way, infusing rock and soul and resonant lyrics into boundary pushing music. They’ve released five EP’s, three studio albums and a live DVD, and were the backing band for Elvis Costello, Don Henley, and Jackson Browne. It is their traditional blues cover videos that pushed them over the top and attracted thousands of fans across the world.

Rebecca and Megan Lovell were kind enough to talk with us today on their busy tour.

Martine Ehrenclou: Thank you for taking the time for this interview. We are big fans of yours, and not just of your albums (we love those too) but of your blues videos with just the two of you. We are really looking forward to your upcoming album, Venom & Faith.

Rebecca & Megan Lovell: Thanks so much! We can’t wait for the world to hear it.

ME: Where did you draw inspiration for Venom & Faith? Please tell me a bit about that and about the album.

R&ML: Venom & Faith was inspired by being out on the road touring, making cover videos just the two of us, exploring blues music deeper, and generally further discovering what it means to be Larkin Poe. We feel we’ve been coming into our own more and more in the past couple of years and V&F is the product of that growth. We were so excited to get into the studio again after Peach because we knew the process we wanted to follow; to self-produce and rely wholly upon our own musicality to create the soundscape of the record. Making V&F was a freeing experience because we didn’t feel the pressure of a producer or label trying to shape us into their idea of Larkin Poe. It’s very authentically, honestly us!

ME: I read that the title of your album, Venom & Faith was taken from a lyric from “Honey Honey” and was meant to conjure a southern gothic image. Could you tell me more about that?

R & ML: We love having grown up in the South and love to conjure up feelings of our homeland with the imagery of our lyrics. “By the alter with a rattlesnake, the venom and the faith” is the lyric from “Honey Honey” that inspired the album title. To our ear, it rang true; ‘Venom & Faith’ felt right, felt like words that encapsulated the body of work.

ME: How did you come up with the original tunes on Venom & Faith? What is your songwriting process? Do you sit down with one another and write or do you come up with pieces of songs on your own and then work on them together?

R & ML: We’ve found that our songs come to creation in many different ways. However, whether the meat of the song is written by one of us or both of us or is a cover, we’re both very involved in the end product. We’ll always find ourselves sitting in a room hashing out the final musical details together; the instrumentation, the vibe, tweaked lyrics, and arrangements. It’s definitely a two-person job; we like to be the check-and-balance for each other.

ME: What made you choose “Sometimes” by Bessie Jones and “Hard Time King Floor Blues” by Skip James for the album?

R & ML: “Sometimes” and “Hard Time Killing Floor Blues” were originally included in our “Tip O’ The Hat” cover video series and we fell in love with their beautiful lyrical truth and musical simplicity. When it came to recording Venom & Faith, we knew we wanted to include a couple of cover songs as a tribute to blues music and those two songs immediately came to mind. Sometimes there are songs that just punch you right in the gut and these are two of them. We wanted to present our own spin… we ended up writing addition lyrics for “Sometimes” since it was such a short bit of song originally. We love how they turned out!

ME: I do too and agree about the emotional punch. You have such a unique and distinct roots-rock sound. How did arrive at that sound? Did you grow up in a musical family and listened to and played similar music? Or did it evolve from years of playing together?

R & ML: We’re lucky to have grown up with music-loving parents who have very good taste in music. Our mom put us into classical violin and piano lessons when we were three and four, while our dad spun us classic rock records; Pink Floyd, Led Zeppelin, the Allman Brothers. In our early teens, we fell head over heels in love with roots music by way of bluegrass, at first, and, later, blues. So, I would say our sound comes from a wide and varied love of many different kinds of music; from classical, to rock, to rap. We try to spin all of these influences into a web that, hopefully, sounds a lot like Larkin Poe.

ME: Any other musical influences?

ME: When did you both start playing and singing together? You both play multiple instruments—did that come out of necessity because you needed a certain sound or did you gravitate to (Rebecca) guitar, mandolin, piano, and (Megan) to lap steel and dobro just because you wanted to play those specific instruments?

R & ML: We’ve been playing together for a very long time now… basically since the beginning of our lives. However, we’ve been playing professionally together since 2005. The evolution of our music has always been very organic. Though we’ve both played violin, piano, cello, banjo, dobro, guitar and mandolin at one point or another growing up, we were both drawn inexorably to our chosen instrument early on. Luckily, there were no fights about who got/had to play what! (Laughter.)

ME: (Laughter) What is your current instrument setup now?

R & ML: We still both dabble in a variety of stringed instruments, particularly while recording Venom & Faith, but I’m (Rebecca) primarily on my stash of electric guitars (mostly Fenders) and Megan stays on her 1940’s Rickenbacker lap steel.

ME: How did you manage to stay true/committed to a very real authenticity in your music? Some musicians are steered into different genres for a variety of reasons, but you have stayed rooted in roots-rock & roll, and blues.

R & ML: Authenticity is really important to us in our music, career, and lives. We’ve been really stubborn and uncompromising when it comes to being true to ourselves, which can sometimes mean taking the long way around. We really put a lot of ourselves into our art, try not to filter, and hope that people can feel that it’s very real and raw. We create music that we’re passionate about and, for us, that means music that always has a link to our Southern roots.

ME: Elvis Costello was your mentor for a number of years. What part did he play in your careers?

R & ML: We feel so lucky to have made a friend and mentor in Elvis Costello. We first met him over a decade ago at a festival and he’s made a huge impact in our career, not only by bringing us out on the road with him, but by giving us a front row, up close seat to what a true legend looks like. He’s got an overwhelming wealth of musical (and otherwise) knowledge and has been so supportive over the years with advice and encouragement.

ME: Nice to have someone in your corner like that. Please tell me about your current tour and what you are most looking forward to about it. Looks like you are touring all over the world!

R & ML: We’re currently on the road with Keith Urban, along with our own headline and festival shows. We’re looking forward to a healthy amount of touring for the rest of the year, including US and European dates supporting the release of Venom & Faith on November 9 as well as a tour opening for one of our all-time favorites, Bob Seger, in December and January. The spring is looking exciting as well, as we’ll be touring Australia for the first time. We hope folks will come out and see us, we really can’t wait to show everybody the new record and the new show!

ME: Sounds like an exciting tour. We are really looking forward to your new album and hope to catch one of your live shows too. Thank you for making the time to talk with me today.

For more information on Larkin Poe: