Review: ‘One of Those Days’ by Louisiana’s LeRoux 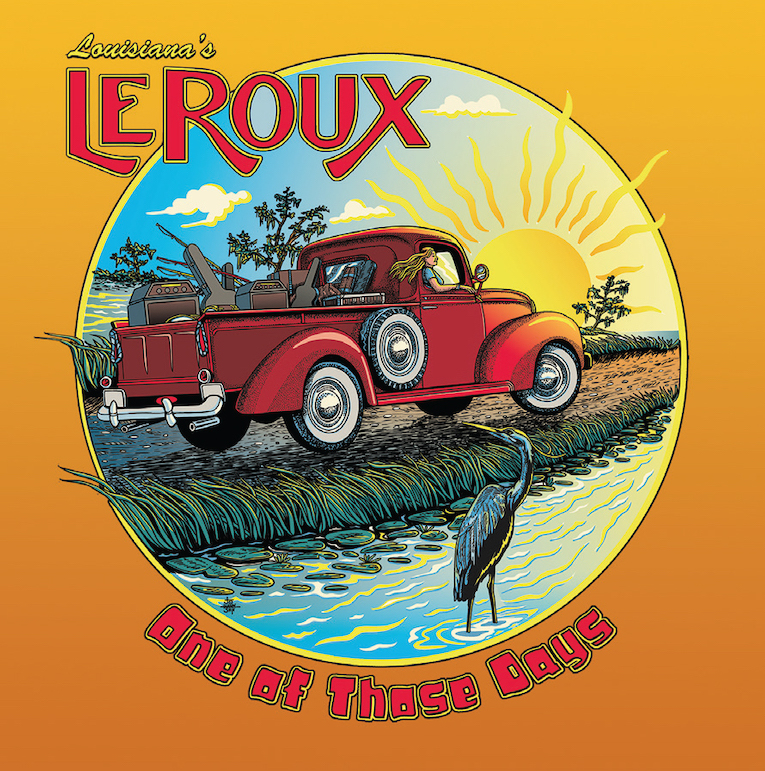 After a ten-year hiatus, they’re back! Fans of southern rock, who aren’t familiar with Louisiana’s LeRoux, should check out their eponymous 1978 album, a potent mix of southern blues, funk and country. Those who are familiar with that record, or with any of the band’s five subsequent releases, will be excited at the prospect of ten original cuts on new album One of Those Days, officially released on June 24 on Gulf Coast Records, produced by the legendary Jeff Glixman.

Opener and title-track, “One of Those Days” is representative of the record as a whole. Smooth, classy blues-rock, spiced with Caribbean-style percussion, sweeping harmonies and memorable hooks. “Throw a back-pack on the back seat,” sings Jeff McCarty, “and I’m about to be long gone.” McCarty has a great voice, effortlessly soulful and filled with conviction. The middle section of this cut is a treat, as the band stretch out on an extended instrumental passage which showcases some fine playing. Reminiscent of Californian legends Los Lobos, LeRoux are capable of laying down the sort of imaginative, well-crafted lines which bypass the brain and go straight to the heart and the feet. Keyboards cut in and out, percussion ramps up and then rolls back. Guitars lick and burn. There’s room for a bit of everything here. It’s a joyous jam played by musicians who clearly know their stuff, and are selfless enough to forgo grandstanding in the name of unity.

“Don’t Rescue Me” is a stone-cold blues-funk hit, powerful and grooving. It cruises rather than strides, with the top down on a vicious highway, heading for the hot city night. “Nothing Left to Lose,” playful and shimmying, mixes swamp rock with dead-centre country. As throughout this set, the easy power of this band really catches the ear. The inclusion of a new recording of “New Orleans Ladies,” a hit from their first album, is a lovely touch. Here, talented guitarist Tab Benoit guests, putting down a beautiful, flowing solo.

The band’s line-up has changed significantly over the years. From the original, 1978 alumni, only Tony Haselden (guitar and vocals) and Rod Roddy (keys and vocals) are present. This is a heavyweight group, however, with a serious spirit. Their sound remains true to the “spicy southern rock” ethos, and newer members are first-rate musicians in their own right, seeped in southern blues and with decades of recording experience between them.

Drummer Randy Carpenter, a native of Baton Rouge and Grand Ole Opry performer, has previously worked with no less a personage than Waylon Jennings. Percussionist Mark Duthu’s relationship with the band stretches back to its earliest incarnation. As a team, they are formidable. Their playing is inventive and versatile, contributing a great deal to the tonal variety on the album. They know when to hit hard, when to drop back and at all times they swing.

Bassist Joey Decker (another Baton Rouge native) does a fine job of filling the great Leon Medica’s shoes. He plays right on the pulse, fulfilling the vital job of pinning sounds together. Jim Odom (guitar and vocals), a graduate of Berklee College of Music in Boston, and keyboardist Nelson Blanchard (whose credits include working with Percy Sledge) combine seamlessly with Haselden and Roddy. LeRoux’s sound is solidly southern at its core, with the Cajun staple of focus on ensemble playing and interplay between the instruments.

A word must be said regarding the album’s producer Jeff Glixman. Musicians recognise and revere a good ‘helmsman’, yet, beyond the confines of the industry, very few receive acknowledgement. Glixman should surely one of them. His discography includes work with Kansas, Gary Moore, Black Sabbath and ELO. He has done a typically wonderful job here. All the elements are perfectly balanced and organically combined. Sounds are allowed to bleed together, yet stay distinct.

The cover art says much about this album. A humble, retro-looking pick-up, cruising eagerly along a dirt track, by the banks of a bayou. Heading into the sun, with a stack of instrument cases piled high in back. Musicians hitting the road and doing what they love. Forty years on from the beginning of their journey, Louisiana’s LeRoux are still going strong with outstanding album One of Those Days.