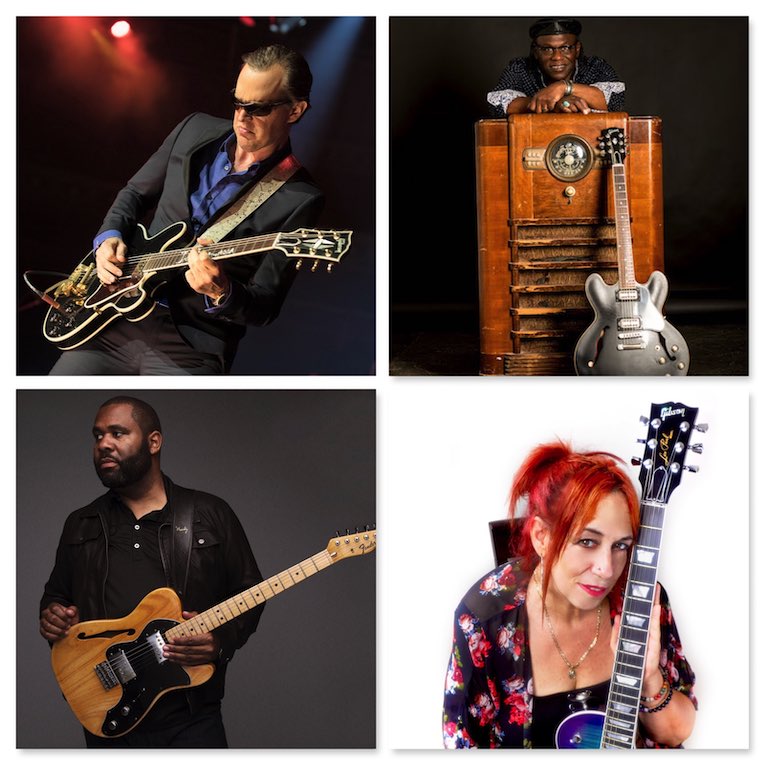 Blues/rock fans in 2020 have a seriously amazing amount of killer guitarists to listen to and obsess over. Greatness in blues music isn’t confined to the history books or the records of the Old Masters anymore, which is an outstanding thing for us all. We’re here today to give you our pick of the top 15 contemporary blues rock guitarists (in no particular order) you’re going to want to be jamming to, pandemic or not. In truth, there are many more players doing outstanding work right now but these are the musicians who consistently keep our speakers hot here at Rock and Blues Muse. You really can’t go wrong with any of these artists, so dive in and commence to rocking!

ERIC GALES
Eric Gales is one of the finest guitarists in the world right now in the blues based rock, jazz or any other style. His natural musicality is beyond the genius level and anything with his name on it is absolutely worth some listening time. He’s a multi-stylistic player who spans the musical world from classical to roots music. Gales is a former child prodigy who picked up the guitar at just four years old and has gone on to release 18 albums as a leader. He’s also won two Blues Music Awards for Blues/Rock Artist of the Year. Check out his latest album The Bookends to hear what all the fuss is about. Thanks to 1AnitrasDance for the video!
Video: Eric Gales

JOE BONAMASSA
Another former prodigy, Joe Bonamassa is one of the most visible guitarists of today. He’s an incredibly skilled and articulate player with a penchant for vintage gear and big tones. His blues, rock, and acoustic playing is fiery and beyond reproach and his global fan base hangs upon his every note. He started life as a protege of the late guitar master Danny Gatton and has grown into a fully-developed recording artist with chops and taste to spare. Check out his Live At The Sydney Opera House and prepare to be blown away. Thanks to JoeBonamassaTV for the video!
Video: Joe Bonamassa

JOANNA CONNOR
Joanna Connor has been putting the blues down from her Chicago base for a long time and keeps getting better with every new release. She’s a ferocious slide player who uses her thick tone and aggressive phrasing to start fires wherever she goes. Her most recent album, Rise, has been blowing up since the day it dropped and blues fans just can’t seem to get enough of Connor’s powerhouse sound. She’s become an institution in Chicago but a viral video of her playing live sent her licks around the world and made her an internet sensation. If you haven’t heard her, you need to fix that situation. Thanks to 1AnitrasDance for the video!
Video: Joanna Connor

JOE LOUIS WALKER
Joe Louis Walker has been on top of the contemporary blues scene for what seems like forever and the hot-handed guitar slinger shows no signs of slowing down anytime soon. He’s a Blues Hall of Fame inductee and four-time Blues Music Award winner whose career stretches back half a century. Walker’s new record, Blues Comin’ On, finds him teaming up with fellow legends Jorma Kaukonen, Keb’ Mo’, Eric Gales, Lee Oskar, and others for what can only be called a super session. Walker is a major presence in the blues world and deservedly so. He’s a top-flight player, a soulful vocalist, and a prolific songwriter. Listen and get happy!
Video: Joe Louis Walker

ROBBEN FORD
Robben Ford has one of the most unique blues guitar styles you’ll ever encounter. He’s an immensely talented player with strong jazz roots who has forged his own blues fusion vocabulary that’s immediately identifiable. Along the way, Ford has worked with artists including Joni Mitchell, Jimmy Witherspoon, Miles Davis, George Harrison, and Bob Dylan and found beautiful ways to connect his playing to them all. As a solo artist, definitive albums like Talk To Your Daughter display Ford’s sophisticated ways, high energy, and heavenly tone. Ford always sounds completely in his element and never disappoints. If you’re reading this, odds are you’re already a fan.
Video: Robben Ford

JOSH SMITH
Roots guitar virtuoso Josh Smith is an extraordinary guitarist who has developed a mature and expressive style of playing and writing songs that mixes rock, blues, and jazz into a spellbinding sound that has kept him in the spotlight since he was 12 years old. He’s appeared and recorded with major artists including B.B. King, Mick Jagger, Elton John, Joe Bonamassa, Jimmy Thackery, Tinsley Ellis, Kenny Neal, Lucky Peterson, Matt “Guitar” Murphy, Johnny “Clyde” Copeland, Double Trouble, Joanna Connor, Kim Simmonds, and more. His recent record Live at the Spud shows Smith and his trio in top form and is required listening for guitar fanatics far and wide. Thanks to 1AnitrasDance for the video!
Video Josh Smith

ALBERT CASTIGLIA
Florida blues/rock guitar man and 2020 Blues Music Awards winner, Albert Castiglia is a volcanic player with chops to burn who can stand shoulder-to-shoulder with any guitar hero of the past or present. He began his career backing up Chicago harmonica icon Junior Wells, learning firsthand about playing the blues at the highest possible level. He’s put out nine solo albums to date full of incendiary guitar licks and confident lead vocals. His new live set Wild and Free will get you up to speed in a hurry. Thanks to Don Odell for the video!
Video: Albert Castiglia

MIKE ZITO
Blues Music Award-winner, Mike Zito is one of the most epic roots musicians around. He’s an incredible guitar player, an excellent songwriter, and a blues visionary who was one of the first artists to begin publicly adapting to COVID-19. His recent record Quarantine Blues was written and tracked while Zito and his band were locked down after returning from the canceled European tour they were on when the pandemic hit. Many fans know Zito from his days with Royal Southern Brotherhood but he’s a bona fide star on his own these days. He’s a beast of an artist with plenty of hot playing and cool songs to go around. Start listening and don’t stop. Thanks to 1AnitrasDance for the video!
Video: Mike Zito

CHRISTONE “KINGFISH” INGRAM
Christone “Kingfish” Ingram is the future of the blues. A young man who first garnered attention as a teenage guitar phenomenon, Kingfish is now a Grammy-nominated artist with a rapidly expanding career. The Clarksdale, Mississippi native has already made quite an impact with his deeply soulful guitar and vocal work, especially for a performer who is barely 22 years old. His debut record, Kingfish, is the Truth and then some. Ingram is a once-in-a-generation artist who is just getting started. This is what a rising star sounds like. Thanks to Alligator Records for the video!
Video: Christone ‘Kingfish’ Ingram

DEREK TRUCKS
Slide guitar monster Derek Trucks has been blowing minds since he was a kid. He’s the nephew of Allman Brothers Band drummer Butch Trucks who was yet another young guitar prodigy setting the world alight at an early age. As he grew, he ran his own band, became an official member of the Allman Brothers, and became a Grammy winner with the hugely-popular Tedeschi Trucks Band he formed with his wife Susan Tedeschi. TTB’s 2019 record Signs is a good place to start with Trucks but anything in his catalogue would work just as well. He’s as good as it gets. Thanks to Tedeschi Trucks Band for the video!
Video: Derek Trucks

BUDDY GUY
Buddy Guy is the past, present, and future of blues guitar playing all at once. His career goes back to the Golden Era of Chicago blues in the 1950s and is still continuing today. His tough-toned guitar style has influenced players including Jimi Hendrix, Eric Clapton, Jimmy Page, Keith Richards, and Stevie Ray Vaughan, winning eight Grammys along the way. His 2018 release The Blues Is Alive And Well proves its title to be 100% true. You’ve already got all his records, of course.
Video: Buddy Guy

GARY CLARK JR.
Gary Clark Jr. is perhaps the leading edge of contemporary roots music. The Texas guitarist and songwriter effortlessly blends blues, rock, soul, and hip-hop into something that’s his and his alone. His songs often deal with relevant social topics, as on his groundbreaking 2019 release This Land, and have won him four Grammys so far. Clark has brought the blues closer to mainstream consciousness than any new artist in a long time and watching his artistry evolve makes the future look great for everyone involved.
Video: Gary Clark Jr.

KIRK FLETCHER
Kirk Fletcher is a five-time Blues Music Award nominee and is considered to be among the best blues guitarists in the world. He has performed with Joe Bonamassa and Eros Ramazzotti, been a member of The Fabulous Thunderbirds and The Mannish Boys, and dropped five albums as a leader. His style blends blues and R&B into his own particular sound and both his vocals and guitar work deliver the goods. His 2018 record Hold On burns brightly from end to end and showcases his gift for phrasing guitar solos like a boss. If you haven’t heard him, you need to. Thanks to missmoke007 for the video!
Video: Kirk Fletcher

JONNY LANG
Guitarist, vocalist, and songwriter Jonny Lang has been putting out platinum records since he was a teenager in the 90s. He’s a Grammy winner and has placed five albums in the Billboard Top 200. His latest album is 2017’s Signs but his entire body of work is worth investigating. He’s a strong, able player and an emotive vocalist, talents that have kept him in the spotlight for most of his life. If you haven’t listened to Lang in a while, give him a spin and get reacquainted.
Video: Jonny Lang

SAMANTHA FISH
Samantha Fish is a stellar guitarist, vocalist, and songwriter from Kansas City, Missouri with a wide-open roots style that takes in blues, rock, country, funk, and bluegrass. She has two Blues Music Awards to her credit so far and is known as one of the best live performers in the business. Fish is always compelling in everything she does and her most recent set, Kill Or Be Kind is no exception. She’s one of the biggest talents to emerge in the 21st Century and there doesn’t seem to be anything she can’t do. Highly recommended.
Video: Samantha Fish