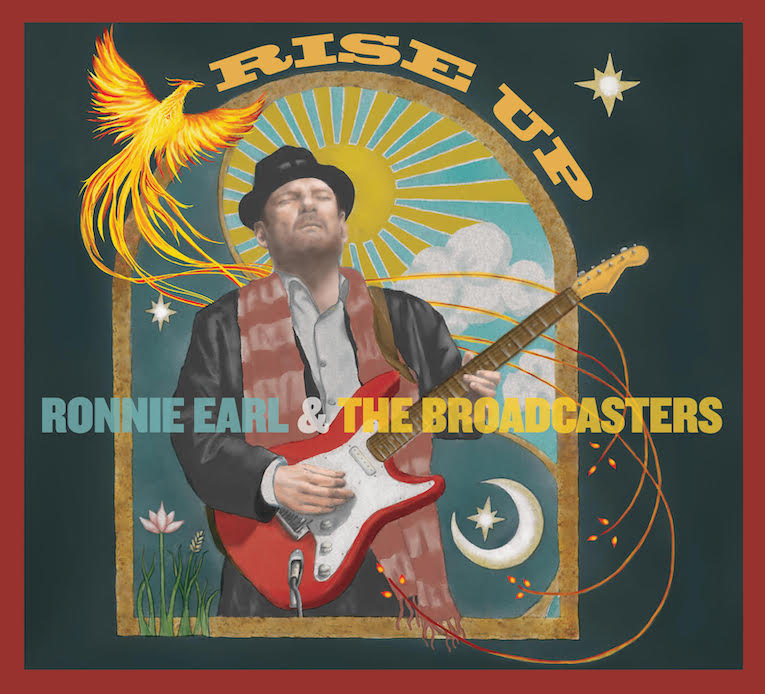 Four-time Blues Music Award-winning guitarist Ronnie Earl gives the world another set of blockbuster blues on his new album Rise Up. The record comes out September 11th, 2020 thanks to Stony Plain Records and contains tracks literally recorded in Earl’s living room as well as live cuts from a Live at Daryl’s House Club performance. The 15 songs here were created to both heal and move the bodies and souls of Earl’s listeners and clearly convey the passion he’s always had for the power of the blues. Earl and his band, Dave Limina on keys, Diane Blue on vocals, Paul Kochanski on bass, and Forrest Padgett on drums, recorded the “studio” material in March just before the COVID-19 pandemic began while Earl was home recovering from back surgery. The Daryl’s House Club selections are from a gig there in January 2019.

Ronnie Earl has been at the forefront of the blues world since he first appeared in Boston bars in the 1970s. His Strat-into-a-Super Reverb tone has become legendary along with his concern for the human condition. He’s the son of two Holocaust survivors who is also celebrating 30 years of sobriety this year. He’s intuitively focused on the pain people suffer, especially from depression and human indignity, and, in 2020, Earl felt the need to respond urgently to Coronavirus and racial strife. He touches on Black Lives Matter, George Floyd, Native American issues, and the general state of our modern existence on Rise Up, drawing from the deep well of emotion that has always driven his music.

Rise Up begins with a graceful solo acoustic rendition of the traditional “I Shall Not Be Moved” that comes directly from Earl’s house to your ears. Ronnie’s touch is always masterful and he puts this tune down with genuine emotion and the economy of motion only a fully-matured artist can conjure. Earl has no need to showboat at this point in his timeline and simply lets the melody and the mood of the song do all the talking.

The live electric shuffle “Higher Love” follows and takes us to Daryl’s stage just in time for Ronnie and the band to school us all. Diane Blue’s voice is emphatic and strong over the easy mid-tempo shuffle and Earl’s tone and playing are perfect and beyond reproach. His rhythmic comping is as compelling as his lead work and his ever-present soulfulness is in full effect. The band shadows and supports Earl and Blue beautifully and makes each moment of the song one to be savored.

“Blues For George Floyd” is a new, mournful slow blues instrumental that rings of sadness and respect all at once and shows Earl at his most eloquent. His phrasing and bends are confident and wise and Earl tells us how he feels the best way he knows how. His live version of Fenton Robinson’s “You Don’t Know What Love Is” is funky, raw, and gives Diane Blue more time to shine on the microphone. Earl’s reverb-soaked tone nails the classic Fender sound of the mid-1960s and will turn every guitarist listening Fiesta Red with envy.

“Black Lives Matter” is another expressive slow blues that hovers in the intrinsic pain of this year. Dave Limina’s ghostly piano playing sets much of the mood of this unusual talking blues voiced again by Diane Blue and Earl’s guitar work is what pushes it into your consciousness. “Navajo Blues,” “Big Town Playboy,” and “Lord Protect My Child” are equally amazing and will pay big dividends on your investment of listening time. Ronnie Earl remains a true master of blues music and is one of the most heartfelt musicians working today in any genre. Give Rise Up a chance and it will make this year seem just a bit better and brighter.