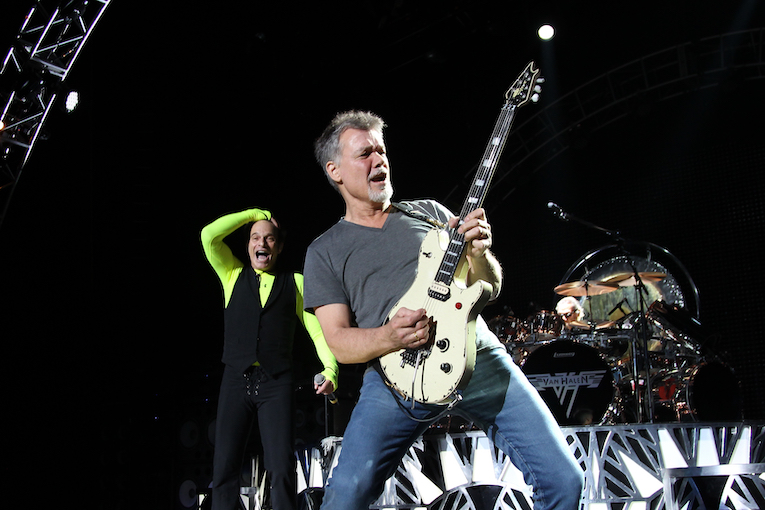 Eddie Van Halen, the legendary guitarist and co-founder of the rock band Van Halen has died after years of battling throat cancer.

On Tuesday, his son Wolf Van Halen wrote on Twitter, “I can’t believe I’m having to write this, but my father, Edward Lodewijk Van Halen, has lost his long and arduous battle with cancer this morning. He was the best father I could ever ask for. Every moment I’ve shared with him on and off stage was a gift. My heart is broken and I don’t think I’ll ever fully recover from this loss. I love you so much Pop.”

According to TMZ, the rock guitarist died Tuesday at St. Johns Hospital in Santa Monica, CA. For over ten years, Eddie Van Halen has battled cancer and has been in and out of the hospital over the last year, including undergoing chemo last November.

Born in Amsterdam in 1955, and settling in Pasadena, CA, Eddie Van Halen was one of the most influential guitarists of our time who was lead guitarist for the rock band Van Halen. Until 1985, the band consisted of Eddie, his brother Alex Van Halen, vocalist David Lee Roth, and bassist Michael Anthony.

Eddie was a legendary guitarist who influenced a generation of guitar players. His instrumental “Eruption” by Van Halen showcased a solo technique called ‘tapping,” utilizing both hands on the neck of the guitar. Eddie was known for his explosive and inventive guitar playing. Eddie was named #8 in Rolling Stone’s poll of the 100 greatest guitarists

His famous guitar named, “Frankenstein” was pieced together from other parts of guitars.

In 1977, Warner Brothers records offered the band Van Halen a recording contract. Their album, Van Halen reached number 19 on the Billboards pop music charts, becoming one of rock’s most successful debuts. In the early 1980s Van Halen was one of the most successful rock bands of the time. Their single “Jump” earned the band a Grammy nomination. The band won a Grammy Award in 1992 for Best Hard Rock Performance with Vocal for the album, For Unlawful Carnal Knowledge. Van Halen has 13 #1 hits in Billboard’s Mainstream Rock chart. Some of their hits were “You Really Got Me”, “Running With The Devil”, “Eruption”, “Jamie’s Cryin'” and more.  In January 2007, Van Halen was inducted into the Rock and Roll Hall of Fame. After David Lee Roth was replaced by singer-guitarist Sammy Hagar, they continued to produce platinum selling hits and singles for another ten years.

Eddie Van Halen also won acclaim for his guitar work outside of the band Van Halen. In 1982, Eddie played the guitar solo on Michael Jackson’s “Beat It” and in 1983 played guitar and sang vocals on Brian May’s album, Star Fleet Project. In 1987, Eddie played bass on Sammy Hagar’s solo album, I Never Said Goodbye in addition to playing a guitar solo on one track.

In 2003, Eddie recorded “Joy To The World” with Toto guitarist, Steve Lukather. In 2005 Eddie performed on the Jimi Hendrix cover tune “If Six Was Nine” from the album, The State of Things by David Garfield.

In 2007, Van Halen got back together with Roth as the frontman and Wolfgang Van Halen replacing Anthony on bass. The tour earned more than $90 million but was plagued by inner turmoil between members. After Eddie’s rehab for drug and alcohol addiction, a second tour fronted by Roth, began in 2012. Eddie’s health issues forced cancellation of international tours.