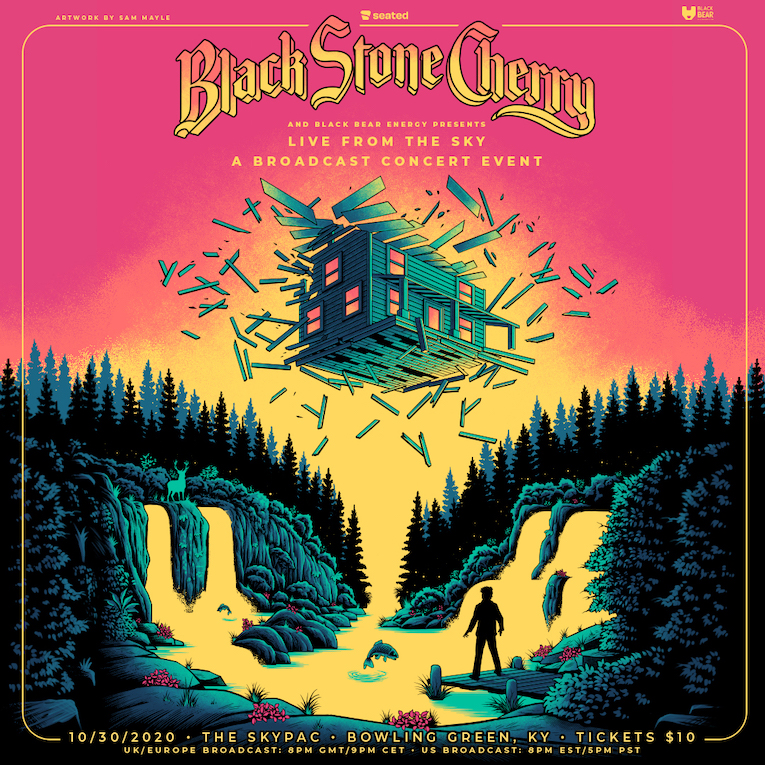 Black Stone Cherry have announced a livestream event that will broadcast on October 30th, timed to the album release date of the band’s new studio record THE HUMAN CONDITION. Titled “LIVE FROM THE SKY,” the event will be staged at SkyPac in Bowling Green, KY. The show is sponsored by Black Bear Energy . The band will be performing repertoire from the new studio album for the first time, along with hits, deep cuts and fan favorites. Tickets and assorted bundles are available here for those in North America click here.

For all fans in the U.K. and across Europe click here. Fans can create their own bundles from a list of a la carte items that will be hosted at point of purchase. All “Live From The Sky” dedicated merchandise will only be available while the show is streaming. Ticketing is priced at $10 / £ 10 per territory where the broadcast is available. The event will be hosted by Seated. On-Sale begins at Noon Eastern on Wednesday, October 14.

Looking towards bringing the new songs to the stage, Chris Robertson shares, “While this may not be the show we all hoped for, this is where we are! We hope you find yourselves feeling right here with us as we wish we were all together. Here’s to what would have been a year’s worth in one show!! Let’s Rock!!”

The Human Condition was completed mere days before the COVID-19 lockdown was imposed and as events progressed, it became apparent that the album the Kentucky band were completing featured lyrics that were eerily prescient. “There was a real urgency and fear of the unknown during those sessions – it was a scary time,” recalls drummer, John Fred Young. “Every song on this album tells a story of the experiences we all go through – our happiness, our struggles, and how we have to adapt.” “When I listen back to this record, I feel all these different emotions,” Jon Lawhon says. “We started when we were teens, and life has taken its course, especially now. Through it all, your heart and your perspectives change, but one thing that hasn’t changed is our connection as friends.” Chris affirms, “This is a brotherhood. It’s been amazing to stick around with all four original members and still be inspired. Here’s to 7 more albums and another 19 years!”