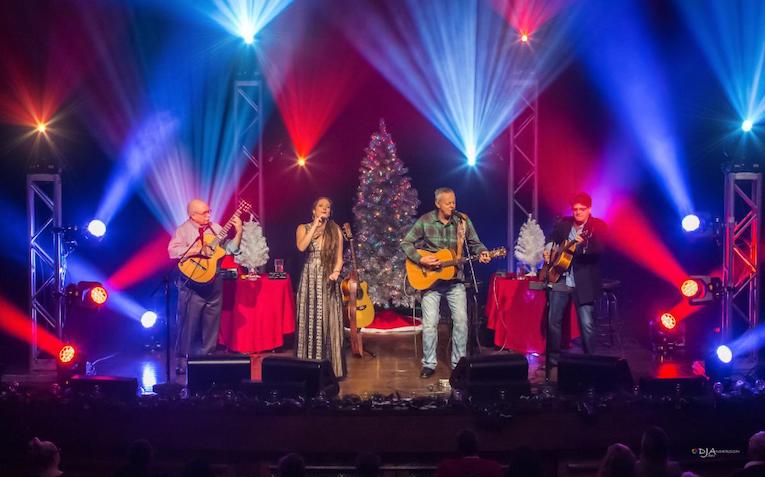 TOMMY EMMANUEL, the acclaimed and Grammy-nominated acoustic guitarist, singer and songwriter, will release a live holiday album, LIVE! CHRISTMAS TIME, on December 4 via his label CGP Sounds along with Cruzen Street Records. Today (November 20), “Rudolph The Red-Nosed Reindeer” has been released as the first song from the album. This marks EMMANUEL’s first Christmas live album having released two studio holiday albums before (2011’s All I Want For Christmas and 2016’s Christmas Memories).

Combining EMMANUEL’s acoustic guitar virtuosity with his stellar band’s musicianship and infectious holiday spirit, the 11-track LIVE! CHRISTMAS TIME (a digital release only) was recorded on December 7 and 8 in 2016 on his “Classics & Christmas Tour” at the Big Room at the Sierra Nevada Brewery in Chico, CA. It features Tommy Emmanuel, CGP on guitar & vocals, Annie Sellick on vocals, John Knowles, CGP on guitar & backing vocals, and Pat Bergeson on guitar, harmonica, and backing vocals. The album was produced by Tommy Emmanuel, engineered and mastered by Marc DeSisto, mixed by Brad Benge and Tommy Emmanuel, with Brian Penix as Executive Producer. See the full track listing below.

“When I listen to this recording, I hear the joy, soul and fun we had at that show,” says EMMANUEL. “Christmas music is so joyous to me and I feel we rose to the occasion that night.”

On Sunday, December 13, Tommy Emmanuel and revered dobro player Jerry Douglas (14-time GRAMMY Award-winning and three-time Country Music Association Musician of the Year) will perform together songs from each other’s Christmas albums live from 3rd & Lindsley in Nashville, TN. Joining them will be Pat Bergeson (guitar/harmonica), Daniel Kimbro (bass), and Christian Sedelmyer (fiddle). A limited amount of fans will be allowed in the audience. This show will be broadcasted live on Nashville radio station Lightning 100 and streamed on Nugs.TV.

ABOUT TOMMY EMMANUEL:
TOMMY EMMANUEL has achieved enough musical milestones to satisfy several lifetimes. At the age of six, he was touring regional Australia with his family band. By 30, he was a rock n’ roll lead guitarist burning up stadiums in Europe. At 44, he became one of five people ever named a CPG (Certified Guitar Player) by his idol, music icon Chet Atkins. Today, he plays hundreds of sold-out shows every year from Nashville to Sydney to London. He’s piled up numerous accolades, including two Grammy Award nominations, two ARIA Awards from the Australian Recording Industry Association (the Aussie equivalent of the Recording Academy); repeated honors in the Guitar Player magazine reader’s poll including a cover story for their August 2017 issue; a cover feature for Vintage Guitar’s July 2020 issue; and was Music Radar’s reader’s poll #1 winner of the Ten Best Acoustic Guitarists in The World (December 2019).

A noted fingerstyle guitarist, EMMANUEL frequently threads three different parts simultaneously into his material, operating as a one-man band who handles the melody, the supporting chords and the bass all at once. His talents, which translate in any language, carry him to the far corners of the globe, but EMMANUEL never plays the same show twice, and he improvises big chunks of every date. That leaves him open to those technical imperfections, though they also provide some of the humanity to an other-worldly talent. On May 8, 2020, he released a newly recorded career-spanning double album, THE BEST OF TOMMYSONGS, via CGP Sounds/Cruzen Street Records). Watch the album trailer here which focuses on TOMMY’s unique ability to tell stories without words.