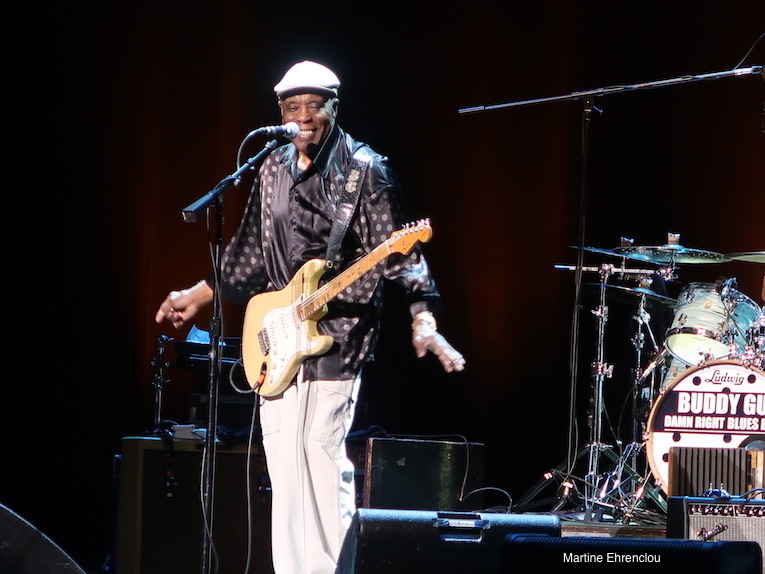 The Saban Theater in Los Angeles was packed with Buddy Guy fans. And I was one of them. Not an empty seat in the house. Everyone was there to see the Blues legend, Buddy Guy, and the Damn Right Blues Band.

I’m going straight to the video I shot of the song, “Five Long Years” written by Eddie Boyd. This video says a whole lot more than I can. You’ll see six minutes of an extraordinary show with not only one of the greatest guitar players and true entertainers, but also a badass band.

You must watch the video until you see Ric ‘Jaz’ Hall play a blowout guitar solo. It’s just so good. If nothing else watch that.

This is how the evening began. The crowd went wild. We were on our feet. People yelled Buddy Guy’s name after the close of the song, yelled for one of the best performers I’ve ever seen. Yes, I wrote that. And I didn’t expect to.

Throughout the two-hour set, Buddy Guy mixed engaging storytelling with his soulful singing and guitar playing, commanding the stage like few I’ve seen. Leaning into the crowd, he played to the people, cracked funny jokes and recounted stories of growing up in rural Louisiana with no running water.

Guy then launched into a raucous blues number, “Who’s Making Love To Your Old Lady” and beckoned the audience to sing on the chorus of the song. And they did. The entire audience sang that chorus. To see Guy’s face light up when we did, was foreshadowing for the rest of the evening.

Honestly, I didn’t expect Guy to be so funny, so animated, so personal. This wasn’t just a performance. This was an interaction and the crowd loved it. And him.

Among other Blues standards, Guy did a grooving rendition of “Fever.” His animated performance and interaction with the audience was priceless. At one point (I think this was the song) where he turned his guitar around with the strings facing his shirt and played percussion.

On the B.B. King tune, “Sweet Sixteen,” Guy played a guitar solo with such beautiful tone. Here, he went all out with his voice and he was just feeling it, throwing his whole body into it.

Check out the video for the Albert King cover, “Drowning on Dry Land.” Guy used his gifts with storytelling to sing that song. I’ll let the video speak for itself. Guy’s guitar tone knocked me out on this one.

In the space after this tune, Guy took a moment to talk to the audience. The band was quiet. He talked about not understanding why there was so much hate in our country now. He said, “How can you hate somebody if you don’t know them?” And someone from the audience, yelled out, “We love you Buddy!”

He tilted his head toward the direction of the voice and said, “I love hearing that. Love is where it’s at.”

The venue thundered with applause.

Towards the end of the show, 20-year-old Quinn Sullivan joined Buddy Guy on the stage with his Strat. I’ll let the video speak for itself.