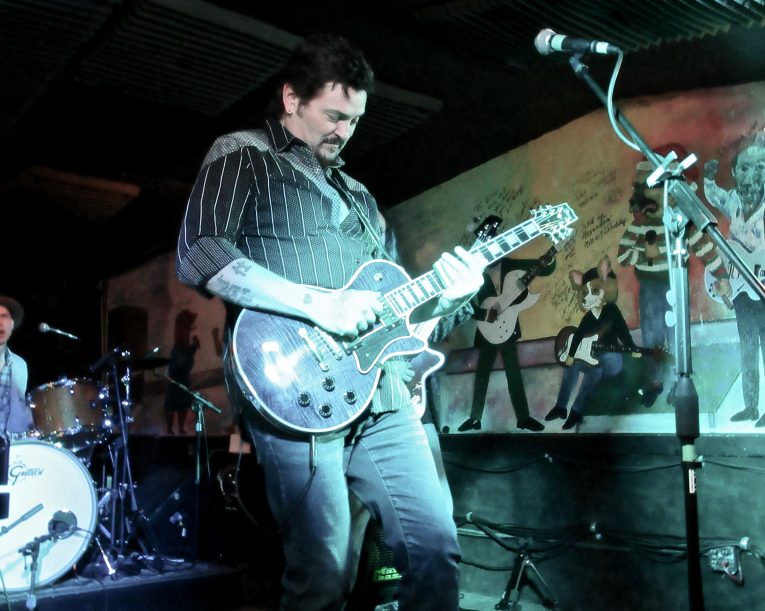 Fresh off his win of the Blues Foundation’s Blues Music Award for “Rock Blues Artist” 2018, singer/song-writer/guitarist Mike Zito and his band performed live in Pittsburgh on Friday, May 18th.  Zito is touring in support of his newest album from Ruf Records, First Class Life, released on May 11th.

At this point in his long and successful career, Zito has performed on many high-profile stages. But to get there, he’s had to play his fair share of road houses, bars and night clubs along the way. Unfazed by the landslide of industry and fan recognition he’s enjoyed for years, Zito is never above returning to his roots and having the time of his life in venues like this. That was the case when he performed at Moondogs Pub, just ten minutes north of “The Burg.”

Taking the stage in front of an enthusiastic crowd, Zito greeted the room, telling the audience that he and the band would be presenting material from the new album, plus some old favorites. With that, they went into the first two songs on First Class Life– “Mississippi Nights” and the title track, “First Class Life,” which has been getting air-time on terrestrial and satellite radio.  Both songs featured Zito’s vocals and slide playing in true form. His band of top-tier Texas session and stage players (all of whom appear on the new album) – bassist & backing vocalist Terry Dry, drummer & backing vocalist Matthew Johnson and veteran keyboardist Lewis Stephens (who has worked with Freddie King and Delbert McClinton, as Zito declared) were a perfect groove-producing machine.

The third song, “Dying Day” about Zito’s wife Laura, also from First Class Life was a powerfully driven roadhouse shuffle. Zito’s soulful vocals projected straight from his toes to the back of the house, as Stephens’ Leslie Speaker keyboard effect, set against the deep, swinging pocket which Dry and Johnson laid down, filled the room.

Zito covered two songs by the legendary blues singer Bobby Bland, performing “I Smell Trouble” and “I Wouldn’t Treat a Dog (the Way You Treat Me),” also found on his new release.  Zito, who is every bit as great a vocalist as he is a guitarist, brought chills and cheers with this tribute.

Playing an extended version of the title track from his previous album Make Blues Not War, Zito stepped off stage to join the audience. On the small dance floor for a brief shimmy, he continued toward the bar and then behind it, all the way to the far end, where he posed for a selfie with the bartender before stepping up onto the bar. He walked the length of the bar (and dodged a ceiling fan) as he continued to play his beloved Heritage Les Paul Custom, never missing a note. Returning to the stage to end the song, he quipped, “I never knew playing guitar could be so dangerous!”

Announcing that the band would play one more song before pausing to meet the audience and autograph merchandise, Zito advised, “Take a break, get yourself a drink and don’t take no shit from the man!” before counting off Creedence Clearwater Revival’s “Fortunate Son” to end the first set.

The band returned to play the shuffling “Dirty Blonde” off of Pearl River and the funky new “Back Pain,” featuring brief, tasteful solos from Dry, Johnson and Stephens. That was followed by “Gone to Texas.”

The finale was “Judgement Day,” which jammed on to reference Led Zeppelin’s “Whole Lotta Love” and “Kashmir.” It took little nudging from the audience to get an encore from Mike and the guys, who rocked the rootsy “One More Train.”

Mike Zito’s genuine devotion to his music and his fans was on display throughout his performance. He can be seen as he tours in support of his new release, with a brand new, well-earned Blues Music Award under his belt.