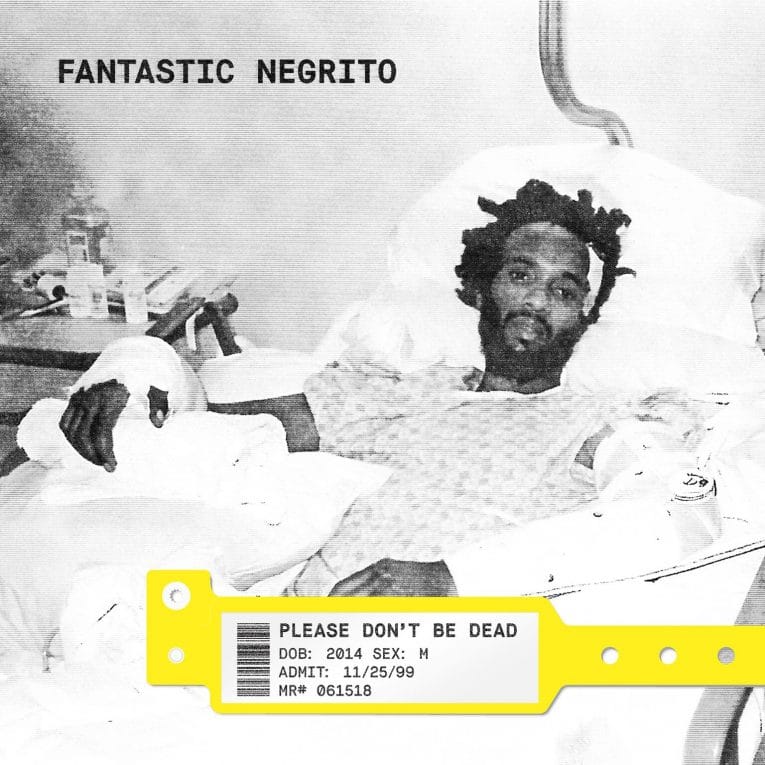 2017 Grammy winner for Best Contemporary Blues album, Fantastic Negrito continues to dig deeper than deep to tell his stories from the streets of Oakland (and America) while stretching the boundaries of the blues on his new Cooking Vinyl release Please Don’t Be Dead, out June 15th.

I’ve heard a lot of fantastic music since I started writing reviews for Rock and Blues Muse; from virtuoso veteran guitarists, to talented youngsters carrying on the traditions of the art form of the blues. As you can tell from my other reviews, I am ceaselessly blown away by their talents, skills and all-around musicianship. Please Don’t Be Dead reminded me, in a marrow-deep way, of something that can be too easy to forget: that the blues isn’t just an art form to be practiced, and hopefully mastered, in the name of good entertainment. At its core the blues is a vehicle for self-expression, born out of pain, and meant to give voice to the voiceless and to the deepest, most personal parts of our struggles and our souls. I’m talking about the difference between Eric Clapton doing a jaw-dropping cover of a Charlie Patton or Robert Johnson tune versus Clapton using the blues to channel his unimaginable grief in “Tears in Heaven.” I could do 800 words just on the backstory of this talented but star-crossed musician, but I’ll let you google it instead (and you will) while I concentrate on the music heard here.

Fantastic Negrito works in a personal dimension all his own, pulling in magic from every direction, from the most basic of delta blues, to fractured funk, with hints of metal and even some digital sonic hi-jinks in the form of vocal and sound loops. You might be challenged by some of what you’re going to hear, but in the most important ways this is deeply traditional blues that still manages to slaughter several of the genre’s sacred cows at the same time.

Opening track “Plastic Hamburgers” might be a bit of a Trojan horse – getting inside your walls with the familiar feel of a big riff and the kind of vocals that sound like a cross between Soundgarden and Rage Against the Machine… right up until the band hits you with a funky middle section and issues the call to arms to “break out of your chains and burn it down.” The big truths continue on “Bad Guy Necessity,” with the timely message that “Everybody needs a bad guy, they need somebody to blame.” The hard message is softened by a soulful chorus and the kind of funk groove and vocal vamps that would make Prince smile and nod.


“A Letter to Fear” launches like a slow-rolling “Dazed and Confused” as it gradually becomes a very real, very personal anthem that holds nothing back. This isn’t blues about a girl, or blues about “playin’ the blues.” This is blues about the news on today’s front pages and the damage being done, ultimately to all of us, along with a few reassuring hints sprinkled in about how we’re all going to get through it. This is immediately followed by the equally hard-hitting  “A Boy Named Andrew” which opens with a driving middle-eastern flavored riff that breaks off in a funk/soul direction, with some falsetto floating over female back-up vocals before coming back to the riff again and again. This isn’t just Soul music, this is music directly from the soul with no filter. The short and simple lead guitar break won’t get Fantastic Negrito on the cover of Guitar Player anytime soon, but it does something way more important: it pierces your heart.

You might think you’re going back to tradition as “Transgender Biscuits” opens with a delta slide guitar and porch-stomp beat, but the song title should have been a clue that nothing in Negrito World is ever that simple. This song is a mad mad combination of that most traditional delta feel, the first real big dose of vocal loops, occasional megaphone vocals and more messages, tempo changes and U-turns than I usually find in an entire blues album. There are more digital manipulations on “The Suit that Won’t Come Off” but there is still no denying the traditional blues backbone with the haunting hummed background vocals, and the message(s) including “How do you sleep when you’ve stolen everything you have.” This is more truth, and the sugary-sweet bridge section is there just to make the medicine go down a bit (but not much) easier. Another spare lead guitar break puts across the same nearly broken, but still unbowed sense of pride.

I can only describe “A Cold November Street” as Fantastic Negrito’s remix of the deep blues and a traditional corrido – a poetic narrative ballad about hope in the face of oppression. This song sticks to you even before it hits you with the eerie “I’m sorry” vocal loop and the most intense guitar break on the entire album. Try not to get whiplash the first time you hear this song. It won’t be the last time you listen to it either. The solid guitar riffs are back on “The Duffler” combined with more Prince-esque falsetto and hard funk, but they’re combined with lyrics that are about SO much more than just shaking your booty. The short lead break is like a dove soaring over a battlefield before the song decays into chaos, only to be resurrected on the back of that killer opening riff.

After all the chaotic sounds and jagged edges of the previous songs, the gentle tone and sweet crooning of “Dark Windows” is startling in its simple beauty. A downbeat ode to a friend, the song ditches the bombast and floats on swirly Hammond organ sounds, possibly some cellos and a slow-building Eleanor Rigby-esque moment near the end. Clocking in at just 1:07 “Never Give Up” might not count as a “real song” to some folks, but this old punk rocker has always known that if you can get your point across in a minute then anything added to that is just bullsh#t. Few things could be simpler, yet more profound than a mantra like “never give up.” Point taken.

Since you gotta leave the people with some hope, the album closes with the most upbeat tailfeather shaker of the bunch. “Bullshit Anthem” combines the sounds of Prince at his cheekiest and a street preacher at his most defiant, closing out the album with the same themes it started with. “I get knocked down, but I keep on fighting” and “take that bullshit, and turn it into good shit.” I know some purists will scowl at the looping and some of the other flourishes found here (and throughout the album actually,) but I dare you to find fault with this anthem that reminds us there is always the chance to turn night into day, and it is our responsibility as humans to keep trying, keep rising, and keep lifting up our brothers and sisters.

It is only mid-June, but I’m calling it: This is my Album Of The Year.

For more information on Please Don’t Be Dead by Fantastic Negrito: