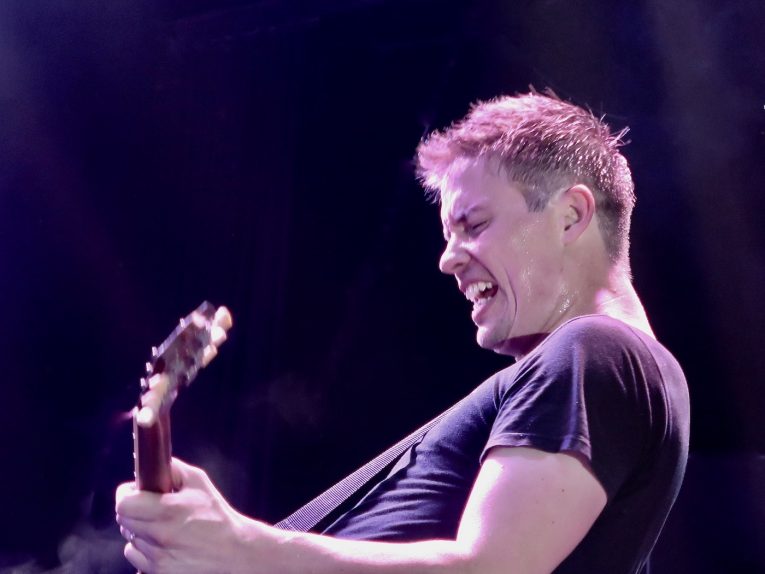 After having seen Jonny Lang live only a few months before, I was ready to see him again. This Grammy Award-winning virtuoso guitarist, singer-songwriter is so riveting that his concert at the Canyon Club in Agoura Hills, CA on December 2nd will not be my last.

Known not just for his other-worldly guitar chops but for vocals that seem to open a vein to his soul, Lang’s music is blues-rock infused with gospel and jazz. With tremendous feel and groove, Jonny Lang delivered a show with great tunes from his latest album and others, jaw-dropping guitar solos, and old-soul vocals–all with top shelf musicianship.

I was two feet from the stage. To be that close in a venue that seats 1000, and packed to capacity, is in itself an experience. Jonny Lang is known as one of the best live performers and guitarists of his generation. At the age of 36, Lang has already had a successful career for two decades, beginning with a platinum album at the age of 15. Hailed as a guitar prodigy, Lang toured with the Rolling Stones, BB King, Aerosmith, Buddy Guy, Jeff Beck and Sting—all by the time he was 16 years old.

Jump-starting the show, Lang and the band dove head first into the funky rock hit, “Don’t Stop” from Lang’s 2006 album, Turn Around. The venue boomed with whoops and hollers from the crowd. Call it star power, extraordinary talent or a performer with hints of Jeff Beck, Stevie Ray Vaughan, Joe Cocker and the energy of Tina Turner, Jonny Lang takes control of the stage. No one could take their eyes off him. 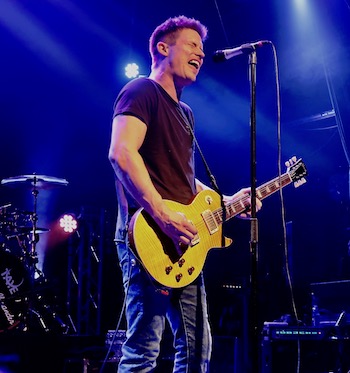 Gibson Les Paul in hand, Lang launched into the riff-tastic “Signs” from his latest album, a darker rock tune that reflects on the state of our world today with plenty of guitar distortion and a heavy back beat. The musicianship was outstanding—it would have to be to keep up with Lang. Barry Alexander on drums kept the rhythm locked down tight in partnership with Jim Anton on bass, Tyrus Sass on keys and Zane Carney on guitar.

Jonny Lang doesn’t just perform. He gives himself over the music, to his playing, rocking from side to side, kicking his legs, shoulders twisting. It is that willingness to give in completely, that confidence to bare himself on stage, that in part makes him so appealing as an artist. Pair that with his brand of guitar and vocal excellence, and you’ve got a maestro.

Lang channeled everything he had into the Tinsley Ellis original, “A Quitter Never Wins” a blues heartbreaker—especially the way he sings it—with emotion plumbed from somewhere deep. His guitar playing was fiery and expressive, equally as soulful.

Lightening things up, Lang performed the rhythmic jazz number, “Rack Em Up.” He and the band had so much fun on this playful tune and that kind of joy was infectious. He made room for all of the band members to take solos and each had their time in the limelight. To finish off the tune, Lang vocally scatted the melody in unison with his guitar riffs.

Lang then introduced his band and thanked everyone right down to the crew and lighting staff of the venue. To the audience he said, “Thank you so much for coming. I hope you like the rest of the show.” Just a genuinely nice guy who was happy you’d come to enjoy his concert.

The next song, “Red Light” rendered the crowd completely silent. The tune began with organ fills and Lang playing sweet riffs on his Telecaster. The soft intro led up to Lang singing about life decisions and the struggle to make the right one. His voice raspy in all the right places, his falsetto strong and clear. When he sang, “I could really use some help right now,” you believed him. And then the song lifts up with his realization that everything is going to be alright, a refrain he asked the audience to sing along with him acapella. Which we did. Lang then played perhaps the most beautiful guitar solo of the night.

The evening continued with the groove stomper, Stevie Wonder classic, “Living For the City.” The band rocked it as did Lang with stinging guitar and powerful vocals. Zane Carney performed a stellar guitar solo that inspired claps and shouts from the crowd.

Closing out the set, “Still Raining” blasted the doors off of blues-rock. Lang and the band killed it on this tune. As they left the stage, the crowd jumped to their feet, clapping and hollering for more. That venue thundered with praise.

The encore included the beautiful love song, “Bring Me back Home” with Lang on acoustic guitar this time, alone on stage. The lights low, he played melodic riffs on his guitar, the audience hushed to take in every note. Then he led into an acoustic version of his 1997 breakout hit, “Lie To Me.” He must have sung that song thousands of times over the years, yet still he was present, digging deep in service of the song. The band returned half way through the song and the celebration began again.

For more information on Jonny Lang: