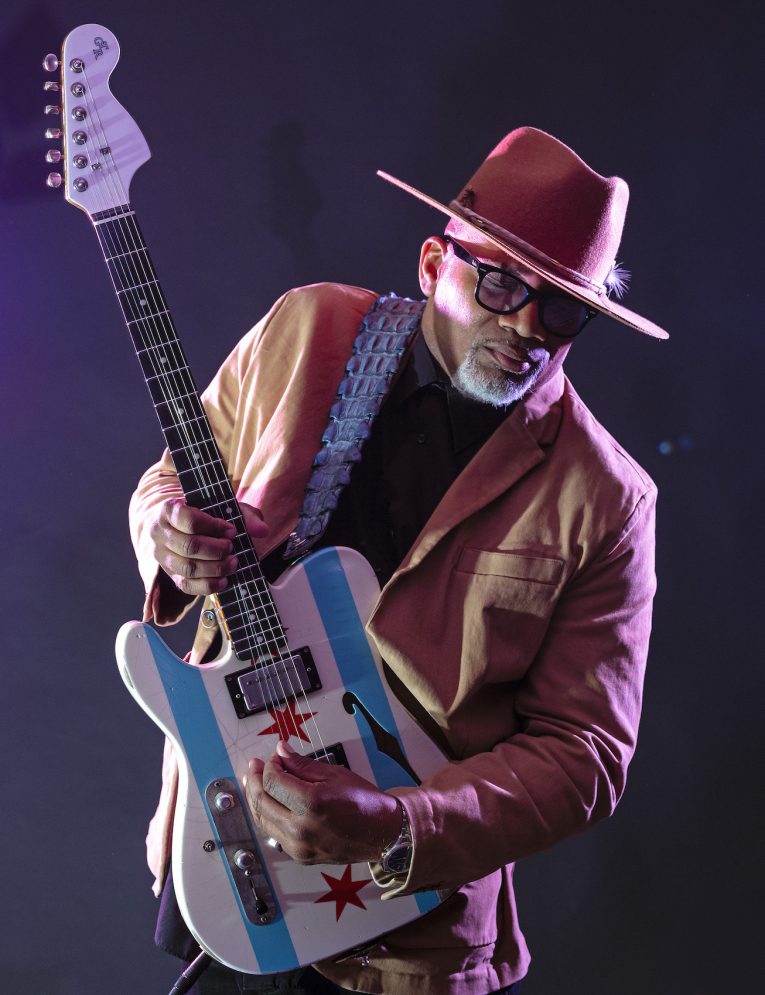 With his 2016 album debut, The Chicago Way, on Alligator Records, Cannon burst onto the international stage as one of the most electrifying guitarists, singer-songwriters to emerge from Chicago in decades. His new release, The Preacher, The Politician Or The Pimp, has garnered rave reviews and is surely to rake in awards.

Toronzo Cannon moonlights as a Chicago Transit Authority bus driver by day and he performs at night. His critically acclaimed live performances have him headlining major festivals, touring major cities in the U.S. and all over the world, including Europe, Canada, and Japan.

Martine Ehrenclou: You’re known for your guitar playing, singing, and your songwriting. How did you come up with the songs on your new album, The Preacher, The Politician Or The Pimp?

Toronzo Cannon: I’m a bus driver for the city of Chicago. Just driving the bus and thinking of different concepts. My approach to writing is from the front of the bus and you sit there and think about stuff you see from the inside of the bus. Because, oh wow, there’s a preacher on the corner, there’s a pimp on the corner, churches, and then you’ll see a politician and a couple of billboards with “Vote for Me.”

Martine Ehrenclou: You drive the city busy four days a week, 10 hour days. I watched a TV interview where you said you draw from the people and write songs about them. You also said that you’re like Clark Kent, where you’re driving during the day and then you let it all hang out at night. Can you tell me about that?

Toronzo Cannon: Well, in the beginning, I would do my gigs around the city and because you play at a small club, everybody’s cool. But then things started to happen and I’m flying off to Europe and then I come back Sunday morning or afternoon, and I’m on the bus Monday morning. No one knows that I was just in London the night before or I was in France the night before. It’s like that.

ME: You have a secret life from the people you pick up?

TC: Yeah, yeah. They don’t know that I had thousands of people freaking out over me and this lady is angry with me because I’m two minutes late and with three feet of snow in Chicago. It’s like, wait a minute. (laughter)

ME: (Laughter) If they only knew. 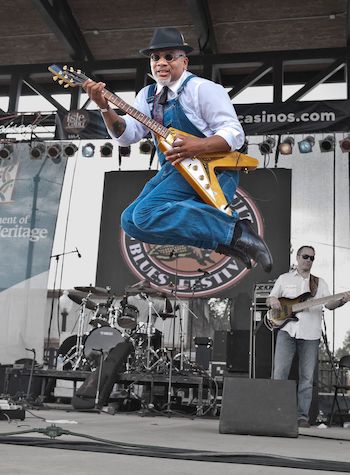 TC: Yes. My thing is when I’m in the heat of the moment of the show and doing our thing, it’s just what it is. Now I’m back, I put my suit and glasses back on and now I’m a bus driver again. When I get on the bus, I really sit down and think about the things that I could have done. Or that other thing that I did I thought was pretty cool. Or that I just saw the Eiffel tower not even 48 hours ago. But the first time I got on TV, I saw that people love channel WGN.

ME: I think that’s the interview I watched.

TC: When people on the bus started to see me, I was amazed about how many people watched WGN (laughter) because I work in an economically deprived neighborhood. The funny thing was, there was a lady getting off my bus, she had recognized me on channel 9, and she’s like, “You a jazz singer, right?” I said, “No, blues, but I understand.” (Laughter)

TC: As I opened the [bus] door, there was a guy, let’s say he was watching his money being distributed, his pharmaceuticals being distributed, let’s put it that way. (Laughter) He was standing in the doorway on the block that I let the lady off at the bus stop. He looked at me, he said, “Hey man, you’re a singer, right? You play guitar, right?” I said, “Yes, that’s me.” He’s like, “Hey man, keep doing what you’re doing.” (Laughter)

TC: (Laughter) I was like, wow, that was one of those moments where I wish I had a GoPro or something. Because he obviously had his love drink in his hand. We’re talking about 2:30 in the afternoon. He got the gold chains on and he was watching his product being distributed. But he’s like, “Hey, keep doing what you’re doing, man.” He was proud of me, and I’m like, “Hey, I’ll take that.”

ME: Can you tell me about the title song on your album, “The Preacher, The Politician Or The Pimp?” You have a line, “We’re one in the same, three different names.”

TC: Well, they all have gift words where they make people do things against their best interests. Do you know what I mean?

TC: In a poor neighborhood, the preacher says, “Hey, give me 10% of your money because God said so.” Then the politician says, “I’m going to do all of this good stuff for you” and he never does it. Then you’ve got the pimp–she makes all the money, but he gets it, and she does all the work. It’s the same thing almost and it’s all about how they choose their words to make people do things that are not good for them.

ME: You’re a real storyteller. There’s a beautiful song on your album called, “I’m Not Scared” about domestic violence. Can you tell me about it?

TC: I was driving this particular route about six months. You have what we call “passenger friends” where you see the same person. You know what time they’re going to be on the bus, you know when they’re going on vacation, you know that particular corner they’re going to be on. A young lady used to get on my bus and we became bus friends. I noticed she used to wear shades all the time and she worked at a daycare and she would always get on my bus, maybe twice a week. One day she got on, despondent, not talking as much, and I said, “Hey are you okay?” And then not knowing I said, “It was like you had a fight with your boyfriend.” She showed me her shoulder and there was a big bruise on there and I was like, “Whoa!”

TC: Again, I don’t know this person other than just the few minutes that she’s on the bus and in the few minutes we talk to each other. I told her, “You know it’s not going to get any better.” She was like, “I know, I know.” She had a cut on her cheek and around the nose one time. She was covering up bruises and it affected me for a while. The next time I saw her, I gave her phone numbers to my friends that deal with domestic abuse and where she could go. She said she would call. Shortly after that, I never saw her again.

One of my friends, as I was talking to her, telling her the situation, she works in a domestic abuse place, she said, “I couldn’t be in a situation like that again, either I’m going to kill him or I’m going to kill myself.” That became part of the lyrics. 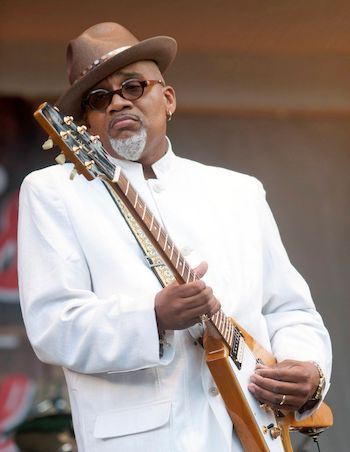 ME: When did you start writing songs?

TC: Probably, 19 years ago now. I used to trash talk on the basketball court. (Laughter) I figured I’d redirect that energy into creating some songs.

ME: Was that same time that you picked up the guitar at age 22?

TC: Yes. I was doing standards and stuff too, like everyone else at the time, but I wanted to write my own stories.

ME: Did you ever take guitar lessons or did you just teach yourself?

TC: When I got my first guitar, I took about three weeks of guitar lessons and the guy was teaching me country stuff, but I wanted to learn, at that time, reggae. I didn’t go back for the last lesson because I didn’t like that process. I like trial and error and whenever I got home from work, it’ll be trial and error and I’ll sit there and listen to a cassette or look at a VHS tape, as they call them back in the day.

I’d go out to a lot of jams, look at people playing guitars, stop people and ask questions and come up with what I can do with my fingers. You see all these great guys though, especially around Chicago, there’s a lot of guitar slingers. Every guitar player wants to touch the hem of Jimmy Hendrix’s garment and be saved.

ME: I hear Hendrix in your playing.

TC: Yes, that’s because I got a lot of pedals. (laughter)

ME: (Laughter) There’s one song on your album that has quite a bit a wah, but I hear more than just a pedal. I hear rock and jazz and soul in your music as well as blues. Can you tell me about some of your musical influences?

TC: Of course when it comes to blues, Elmore James, J.B. Hutto, B.B., Freddie, and all those guys.

ME: I hear jazz too on “Ordinary Woman.” It’s a beautiful song.

TC: Thank you. I’ll listen to some jazz cats, but most of my jazz blues stuff comes from Ronnie Earle because he’s jazzy in his approach.

ME: What strikes me about your album, The Preacher, The Politician Or The Pimp are the songs, the stories.

TC: Big Bill Broonzy said to me so many times long ago, “People leave your show singing the song, not the guitar solo.”

ME: That’s a great line.

TC: Yes, it’s true. The story content is what I want them to remember. A lot of times, I’m lonely when I’m driving the bus because I do that 10 hours a day. I’ll just sit there with a pencil and paper and try to think of concepts, the things I’ve been through, maybe my hopes and dreams, things that people go through. I’m a believer in writing your own songs. I would like to put a mojo on a woman, but it’s got to be today’s mojo. You just have to write what you feel. I tell the young guys that all the time—get a passport and write your own songs.

ME: Your songwriting is front and center.

TC: Thanks. I hope everybody appreciates my songs. I’m just trying to do my part to keep the blues going and keep it interesting. There’s more light out there. You just have to see it. You just have to be quiet and see it.

ME: I like that. You’re considered a torchbearer for the blues.

TC: We are all torchbearers. I’m just holding my little bit of fire to contribute to a torch, and we all got our part to do. There might be a little more light shining on me right now, but then in a year or so, it might not be so bright. I want to bring a light to Chicago blues. We’re still doing our thing. I mean we come from a land of giants.

ME: Absolutely. I think I’ve taken up enough of your time today. Thank you for taking the time to talk with me. It’s been a real pleasure.

For more information about Toronzo Cannon: