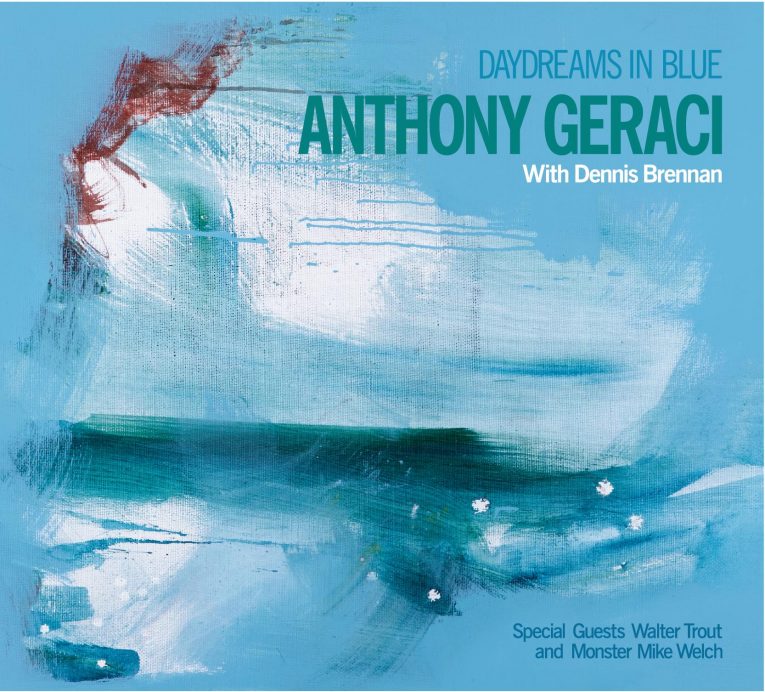 “This by far is the most exciting recording I’ve done under my own name,” Geraci says about the album sessions. “Having all these great musicians on the recording is a ‘Daydream’come true. And having Walter Trout on the song, ‘No One Hears My Prayers,’ is something that transcends beyond just a recorded track. Musicians supporting each other, willing to give themselves to others is something we should all aspire too.”

“Music- all kinds of music – defines my life; and many of my friends, whether they are musicians or fans,” Geraci says. “Where do we retreat to when things just aren’t right? A song is where I go to. It could be a song by Muddy Waters, John Coltrane, ‘New World Symphony’ by Antonín Leopold Dvořák, or a Hank Williams tune – it’s all music. Or I go to my piano and just play. The compositions on Daydreams in Blue were written over about a year’s time, some only a few weeks before the recording session. I’m very sensitive as to who I may want to bring into the recording studio. I have a vision for each song and who I’d like to have play on it. Immediately after I wrote ‘No One Hears My Prayer,’ I thought of Walter Trout. We had done a few shows together recently and he graciously asked me to sit in with his great band a few times. But it was his sound, his spirit that made me want to ask him. Mike Welch has been my friend for a very long time, since the original House Of Blues was in Cambridge, Massachusetts, where I was part of the Blue Monday Band. He was in his early teens and was already (almost!) as good as he is today. Dennis Brennan is truly a roots music hero here in Boston – his vocals and harmonica playing captures the soul of a bluesman – straight from the heart. Check out his ‘Dead Man’s Shoes’composition.”

Anthony Geraci has a long history in the American Blues Community. He is an original member of Sugar Ray and the Blue-Tones, and Ronnie Earl and the Broadcasters; he has recorded with both artists extensively. Anthony has been nominated for the prestigious Pinetop Perkins Piano Award for the last five years: 2016/2017/2018/2019/2020 by the Blues Foundation in Memphis. In 2019, Anthony received nominations from Living Blues Magazine: Outstanding Musician-Keyboard; Traditional Blues Album/Blues Band of the Year/Male Blues Artist from Blues Blast Magazine; and Best Traditional Blues Band from Making-a-Scene.

Anthony’s last recording, Why Did You Have to Go (Shining Stone), received world-wide accolades. It debuted at #4 on the Living Blues Radio Chart, and was in the top 50 most played recordings for 36 weeks on the Roots Music Report. 2019 Nominations from the Blues Foundation included: Album, Traditional Album, Song of the Year (“Angelina, Angelina”), Traditional Male Blues Artist, Band of the Year – Anthony Geraci and the Boston Blues All-Stars.

Anthony has been featured on over 50 recordings with some of the biggest names in blues music. He has recorded with blues pioneers: Big Walter Horton, Carey Bell, Odetta, Big Jack Johnson, Charlie Musselwhite, Lazy Lester, Snooky Pryor and John Brim; as well as contemporary artists: The Proven Ones, Kenny Neal, Sugaray Rayford, Debbie Davies, Otis Grand, Welch/Ledbetter, Zora Young, and Duke Robillard; and garnered a Grammy nomination for his playing on the Super Harps I album (Telarc).