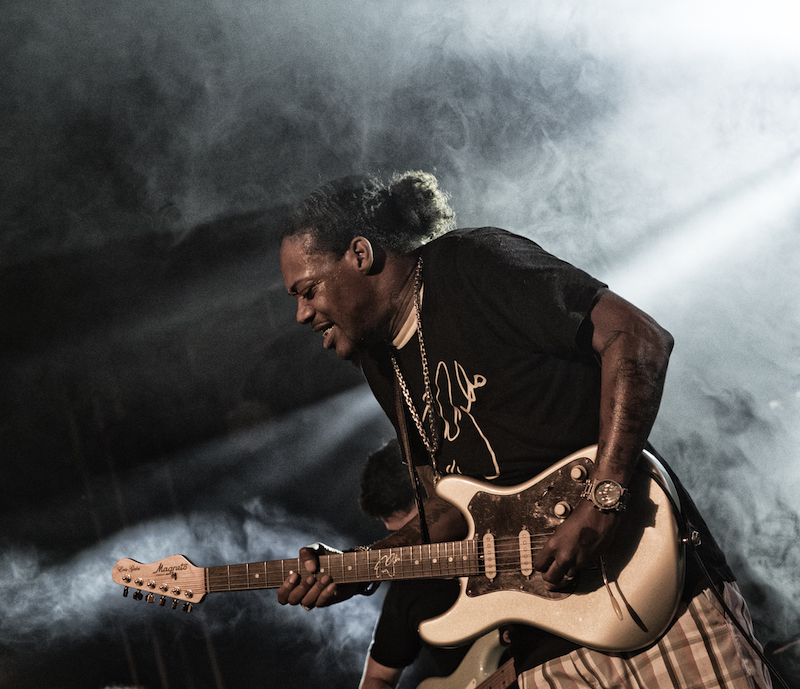 Renowned blues/rock guitarist, singer/songwriter, Eric Gales is known as guitarists’ favorite guitarist. Gales plays with mind-bending skill and deep soulfulness, blending rock, blues, jazz, gospel and more into his music. He is a gifted singer and songwriter as well. Gales is easily described as one of the best guitarists in the world by his legion of fans including Carolos Santana, Dave Navarro, Joe Bonamassa and more.

Originally hailed as a child prodigy, Eric Gales released his debut album, The Eric Gales Band on Elektra Records in 1991 at the age of 16. He went on to release 18 albums, many on major record labels. Gales joined the ‘Experience Hendrix Tour’ and performed with Carlos Santana, Zakk Wylde, Bootsy Collins and Robert Randolph. He describes his critically acclaimed album, Middle of the Road (2017) as his rebirth after a period of issues with alcohol, drugs and prison time, collaborating with Gary Clark Jr, Christone “Kingfish” Ingram, Eugene Gales, and Lauryn Hill.

Since then he has toured almost non-stop, playing shows with Gary Clark Jr, Beth Hart, Gov’t Mule and his first headline tour in the UK and Ireland were to sold out crowds. His latest album, The Bookends released in 2019 on Provogue/Mascot Label Group, also received the highest praise and reached No. 1 on Billboard’s Blues Album Chart and features collaborations with Beth Hart, Doyle Bramhall II and B. Slade.

A 2020 Blues Music Award winner for “Blues Rock Artist,” Eric Gales plans to record his next album with Joe Bonamassa, a record that will surely propel Gales to the place in the spotlight he deserves.

His UK tour has been rescheduled to February of 2021 with added dates at the Brighton Concord, and the Dover Booking Hall. Tickets on sale here.

Martine: With all that’s going on with the widespread effects of COVID-19, UK fans are no doubt excited to see your UK rescheduled tour with special guest Danny Bryant. Something to look forward to for sure. Tell me a bit about your UK tour and what you have in mind for it.

Eric: The UK tour will be no different than any other tour. I approach them all the same. Giving everything we have every night with passion emotions and energy. That’s what I strive for.

Martine: Can you describe your shows? I’m hoping you’ll come to Southern CA but since I haven’t seen you perform live, I’m curious about the songs you will choose for your upcoming shows.

Eric: It all depends. It will be a mash up of The Bookends and Middle of the Road. Sometimes I switch it up. Just go with the flow.

Martine: I raved about your latest album, The Bookends. It’s outstanding in so many ways and shows your mix of rock, funk, gospel, jazz, blues and more. One of your goals for The Bookends was to challenge yourself. Can you tell me about what that meant for you?

Eric: Challenging myself vocally and with the songwriting.

Martine: “Southpaw Serenade” is one of my favorite tunes on The Bookends, feat. Doyle Bramhall II. Is “Southpaw” a refence to being left-handed? Please tell me about the song.

Eric: Growing up as a left-handed upside-down player in a “right-handed world.”

Martine: I’ve watched a number of videos of you performing live with your wife LaDonna playing drums and percussion. Does she play with you all the time? Must be a lot of fun to play with her.

Eric: It is a huge highlight to play with LaDonna every night. We feed off of each other. It’s awesome.

Martine: You have some gospel in your music and I’m a big fan of contemporary gospel greats such as Kirk Franklin, J Moss, Fred Hammond, Deitrick Haddon, Kierra Sheard, May Mary and others. Any plans for at some point putting together a contemporary gospel album?

Eric: I’m a huge fan of gospel. I’d love to be a part of a contemporary gospel record with either one of those artists you named.

Martine: According to videos I’ve watched of you performing, you tell your story of sobriety at the start of each show. What does that do for you? Can you explain your thinking behind that?

Eric: It sets the mood for me getting the message across to anyone who has not been aware of my back story and for those who may be or have went through the same thing. There is hope.

Martine: I heard that Joe Bonamassa and Josh Smith are producing a new album for you. Can you tell me about it?.

Eric: Yes, our tentative scheduling is to record it the beginning of September. The goal of the record is to be the best. I’m sure it will be.