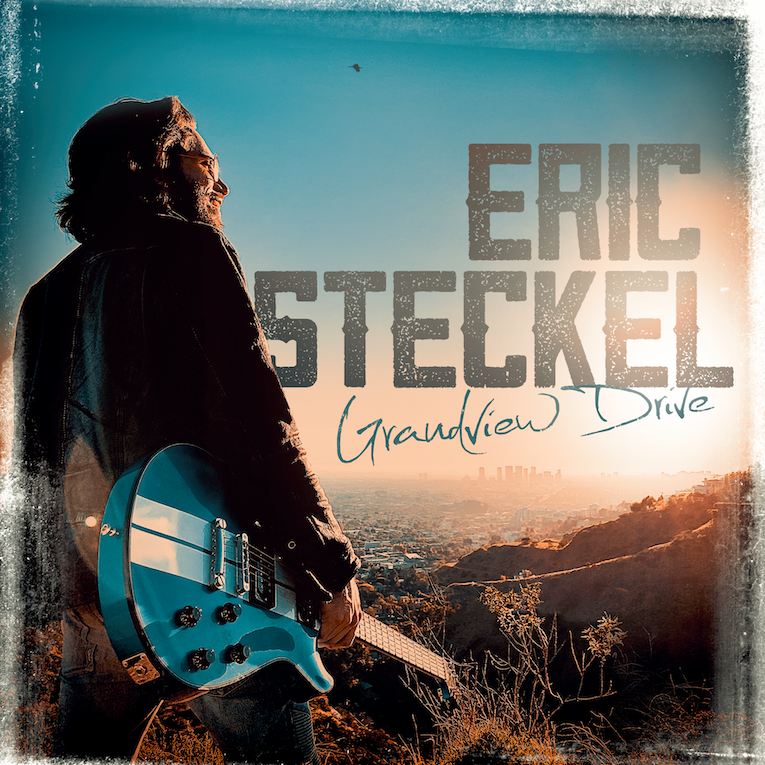 Shredding, wailing guitar, monstrous, clawing riffs which rear and howl; the opening three minutes and forty-seven seconds of Eric Steckel’s new album Grandview Drive roar in celebration of the power and spirit of rock music. It is a slab of pounding rhythm with subtly swinging drums, assured, rough-edged vocals and to finish, a lingering burnout of beautifully orchestrated noise. The album is set to release May 15, 2020.

It is no understatement to describe guitarist Eric Steckel as a prodigy. He cut his first album when he was eleven. At just fourteen years old, when most of us were mired in the process of discovering who we are and what talents we might possess, Steckel was touring internationally with John Mayall and the Bluesbreakers.

Throughout his teens and into young adulthood, Steckel has been touring and releasing albums to critical acclaim, not the least of which being 2018’s Polyphonic Prayer, a powerful record, which manages the enviable trick of calling to mind the most emotionally affecting of Pink Floyd’s work, together with the swagger of Led Zeppelin and the sheer heart-wrenching efficacy of Howlin’ Wolf and John Lee Hooker. Now comes Grandview Drive. Promising even bigger mixes and production and seven self-penned tracks, it is a release long anticipated.

On the heels of opener, “Take My Love To Town,” “Dream For 2” keeps up the pace. A fast rocker, it showcases an element which runs throughout the album, namely the organic blending of piano and organ, which entwine around Steckel’s guitar to often mesmerizing effect. Played by the man himself, who also provides bass and overall production, it makes for a broad tonal palette that manages to punch as well as it sways.

Mention should be made of Steckel’s progress as a songwriter. There is a brutal strength here to match the music. “When Ignorance Turns To Bliss” exemplifies the album’s straight-talking, confessional lyrics. “Sitting by the window, watching the sun come in, taken by surprise, at the recent shape I’m in.” The chorus catches fire in rousing fashion, before moving back into easy-rolling, mid-tempo territory, which remains as hard and heavy as steel. Two extended guitar solos split the track, showcasing Steckel’s ability, lest we were ever likely to forget, for conjuring sharp and inventive refrains.

“Since I Been Loving You,” one of four covers on the album, serves as a fitting tribute to the late Michael Burks, a wonderful bluesman in his own right. Here, we’re treated not only to those stirring, circling guitar runs, but also lush, soulful keys. There’s so much to absorb, it rewards repeated listens.

The album’s most upbeat track, “Promised Land,” sparkles as it strides. Built around an immediately catchy, playful riff, this track beats and bounces, rocks and rolls. “Everybody sing along,” urges Steckel and, indeed, it would be hard not to. Subtle, clever shifts in tempo and attack, push and pull like the tides. Steckel’s exuberant guitar demands that you get up and join in.

Closer “Solid Ground,” is as weighty a slice of blues-rock as you could wish for, blending all of the record’s stand-out elements into a pulsating frenzy. It would be a crime not to mention the exceptional drumming by Don Plowman. Throughout this album, his playing lends invention and might, bringing something special to every track.

Mastering, composition and production are impeccable. Steckel brings to the mixing-desk the same precise, thoughtful yet dynamic professionalism which his guitar-playing displays. It is much to his credit that there is no grand-standing here. Every solo feels appropriate, every break natural. Each constituent part fits as neatly as a jigsaw. Taking control of so many elements does not always bear fruit, but here, it works perfectly. You can’t help but feel Steckel has expended a good amount of time and energy to conjure exactly the sound he was looking for. That said, it would be unwise to expect a musician of his talent to be content merely to stand still. You can be sure that the next album will herald something new.

The term ‘Bluesmetal’ is tailor-made to stir the blood of any self-respecting musicophile. It sparks aural dreams of down-home ‘n dirty guitar, feet planted firmly in mother earth, the flashiness and exhilaration of metal wedded to the soul-striking ‘realness’ of the blues. Grandview Drive achieves all that with aplomb.

Grandview Drive by Eric Steckel will be available on all platforms, including his website, but due to the COVID-19, availability is a bit delayed.