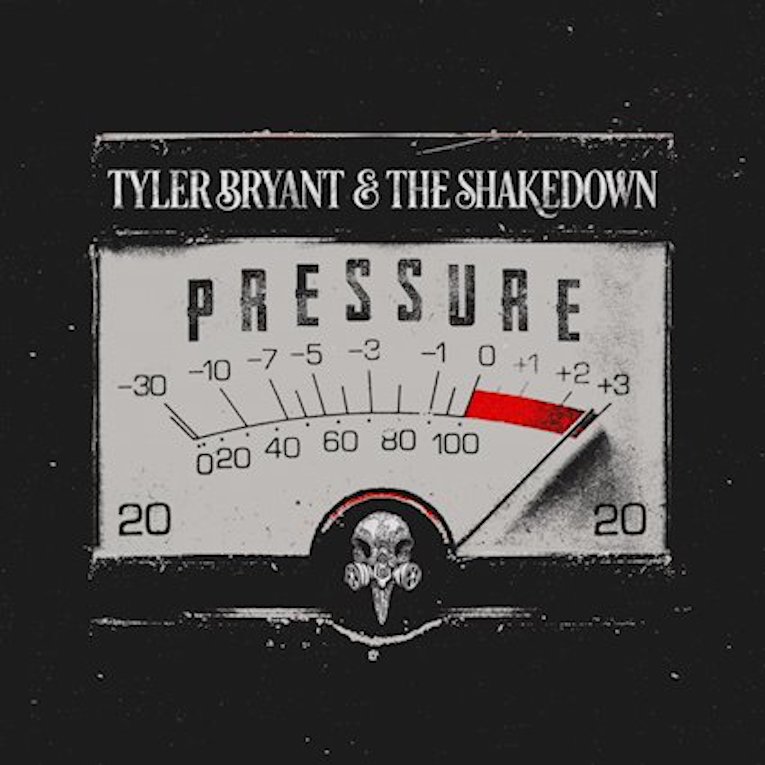 Tyler Bryant & The Shakedown have coped with the bumper-crop of craziness this year has produced in the best way possible: they turned it into a killer new album called Pressure that’s coming out October 16th, 2020 on the Snakefarm/Spinefarm imprint. The record contains 13 timeless, blues-tinged rock songs that function perfectly well as both an acknowledgement of and a distraction from the stress of current events. Co-produced by Bryant and Roger Alan Nichols, Pressure includes guest vocals from Charlie Starr of Blackberry Smoke and Rebecca Lovell of the duo Larkin Poe, who is Bryant’s wife. The songs are a mix of existing tunes written since the last TBSD release Truth & Lies and new material that came together during these quarantine sessions. The result is a set of scorching rock and roll that is Bryant’s high-water mark to date.

Working from a base in Nashville, Tennessee, Tyler Bryant & The Shakedown have built an impressive career thus far. The band has performed with major artists including Chris Cornell, AC/DC, Aerosmith, B.B. King, Jeff Beck, ZZ Top and Guns N’ Roses and has done several headlining tours across Europe and the UK. Strong albums and high-energy live shows have become the TBSD calling cards and band members Caleb Crosby (drums) and Graham Whitford (guitar) match Tyler’s mighty talent step for step. Crosby and Whitford were also heavily involved in the songwriting process for Pressure and did much to keep the group’s creative flame burning through this most unprecedented year.

Bryant’s title track, “Pressure,” gets the album off to a hard-edged start. It’s a heavy, riff-oriented track that keeps nothing back and sets a fired-up mood. “I’m on the brink, you’re watching me sink,” Tyler sings and does a fine job channeling the tension so many of us have lived with this year. The main guitar figure is tight, angular, and chromatic and the lead work positively screams. You can tell this crew is more than a little pent up right away.

“Crazy Days” is a perfect, straight-on rock song that would find an audience in any era. Rebecca Lovell from Larkin Poe adds some sweet background vocals that help the cut come alive and the hot slide playing present here finishes the job. It’s an upbeat, melodic song about living in the End Times and wonders out loud if going crazy is the only proper response to a world gone mad. “Holdin’ My Breath” brings in Blackberry Smoke’s Charlie Starr for vocal support. It’s an outstanding modern rocker that rides a big, brawny pocket and features more smoking guitar performances.

The somber “Like The Old Me” brings in a quieter and more reflective vibe. It’s a tale of someone reaching out in a moment of crisis to the only person they can think of to ask, “Do you still care?” and to not be alone. It’s a mostly acoustic track that fits well in between the more blustery material on the record and comes across as genuine and true. It’s painfully vulnerable but impossible to dismiss. In terms of sheer impact, it may well be the best song on the album.

“Misery” is a chilling and ghostly blues/rock slow jam about a person lost in their alcoholism wondering “where did all my happy go?” and sinking deeper and deeper into the titular emotion. The emotional content is once again very high and Bryant brings the lyrics to life like they were his own story. The droning, swampy guitars drip sadness and give Bryant the space to tell this difficult story. “Fuel” is another jagged rock song that delivers a flinty verse that leads to a big chorus.

Everything on Pressure brings out one or more of the feelings we have all gone through this year in an honest, unflinching way. Tyler Bryant and the Shakedown have crafted a blindingly honest document of life in 2020 that a whole lot of people are going to feel in their souls. Is it the best album to come out of the pandemic yet? Listen and judge for yourself.