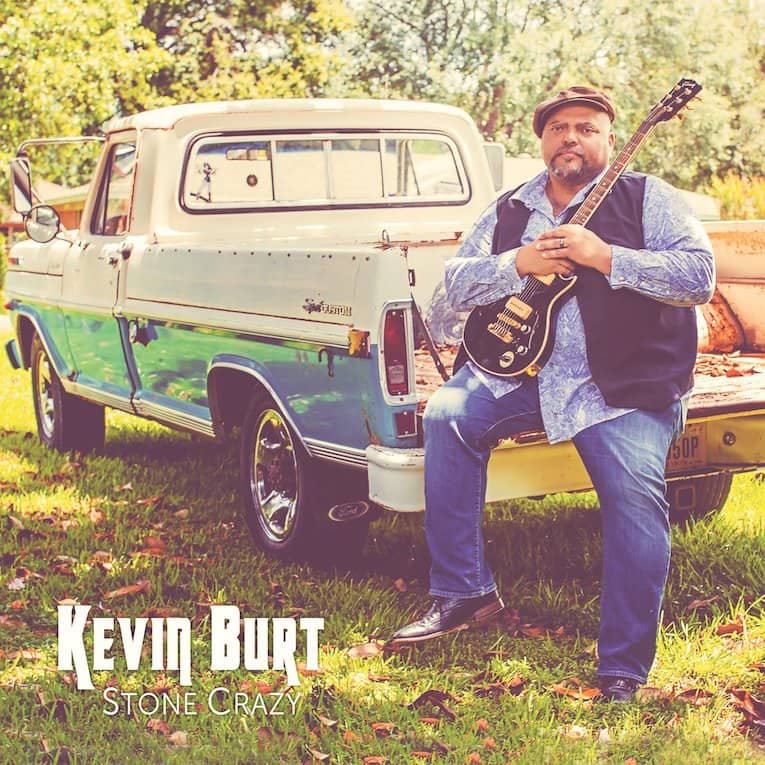 Guitarist, harp player, songwriter, and vocalist Kevin Burt comes straight out of Iowa with a load of blues power on his new release Stone Crazy. The album dropped October 16th, 2020 on Gulf Coast Records and was produced by blues Superman Mike Zito. The set features ten soul-infused blues songs that showcase all of Burt’s considerable talents, especially his powerfully expressive voice, which easily goes from a smooth-and-sweet seduction mode to a commanding growl in a hot second. Burt is an exhilarating performer who easily blends serious music with an infectious sense of humor capable of reaching audiences of all persuasions. The tracks were recorded at Marz Studios in Nederland, Texas and tell stories based on Burt’s observations about life and love here on Planet Earth.

Kevin Burt has been rocking houses in the American Midwest for more than 25 years, proving that real blues artists do actually exist in our corn-covered heartland. His vibe is influenced by Aaron Neville, Bill Withers, and B.B. King and allowed Burt to clean up at the Blues Foundation’s 34th International Blues Challenge (IBC) in 2018, where he took home top honors in three categories. Kevin won first place in Solo/Duo, the Cigar Box Guitar Award for Best Guitar Player in the Solo/Duo category, and the Lee Oskar Award for Best Harmonica Player. In 2019, Burt was also nominated for a Blues Music Award for his debut album, Heartland And Soul, in the Best Emerging Artist Album competition. He’s a multifaceted recording artist who puts his entire being into everything he does.

Burt starts the party with “I Ain’t Got No Problem With It,” a funky shuffle with a 16th-note hi-hat-based groove that will get your bones shaking. Burt’s harmonica is gritty and full and his vocals convey his positive message with a captivating might that’s impossible to turn away from. His tone is warm and engaging and his delivery is immediately entertaining. The band working behind him lights things up just right and does much to help set Burt’s hook into his listeners ears.

“Purdy Little Thing” is a straight-up mid-tempo rocker with an acoustic guitar heart and an urgent, live band attitude. Burt again flexes his vocalizer in that amazing way that keeps you focused on each syllable he utters and the band gives him the musical space to do it. He has a huge personality that permeates all of his songs and it makes it seem like he’s singing directly to you. “I’m Busting Out” hits the funk hard, channeling a vintage 70s style that’s tight, clean, and lively. The rhythm guitar riff is slashing and nasty, which drives Burt into an aggressive vocal mode, and glues the pocket down tight.

The minor key “Same Old Thing” is a simmering potboiler that finds Burt lamenting life’s daily struggles while also testifying to the fact that the world isn’t going to change for any of us. It’s a classic blues track with a locked-down ride cymbal shuffle to it that underscores the intensity of Kevin’s performance and lyrics. “Something Special About You” returns to the acoustic guitar and drives directly through a Southern Rock-ish landscape inhabited by Storyville and The Allman Brothers. Burt easily mixes his genres here, aided by an overwhelming personal authenticity that guarantees everything is going to be just fine.

There are no bad moments or dead spots on Stone Crazy, just one killer track after another performed by someone who deserves global acclaim. Kevin Burt is one of the best male singers working today and his songwriting and instrumental skills rival the giants of blues music. Do yourself a solid and get this man into your daily rotation.

Listen to “Ain’t Got No Problem With It”