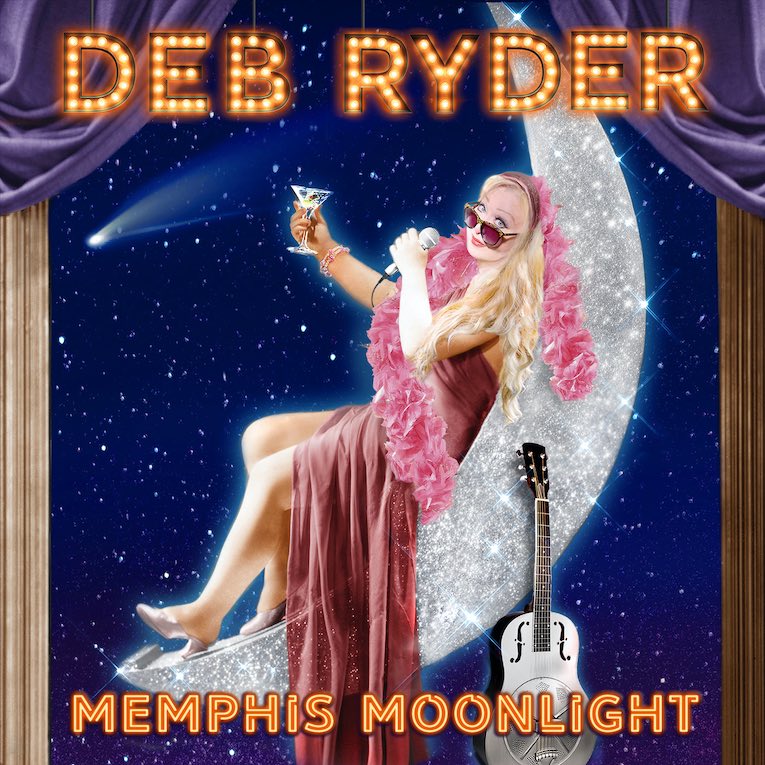 Memphis Moonlight contains 13 new original songs full of relevant lyrics and slick arrangements that swing from contemporary to traditional blues and roots. Ryder is clearly a star in the making who pushes past what’s expected from a blues singer and uses this new set to expand her own unique space.

Originally from Chicago, Deb Ryder is a modern blues artist who is doing more than her part to help create the future of the genre. Her mighty vocals, dynamic stage presence, and intelligent, relatable songwriting have attracted a great deal of attention over the past few years and have set her on a path to the top of the roots music world. A multiple award nominee, Ryder has released three chart-topping, critically acclaimed records since teaming up with Braunagel. With impressive vocal chops combined with first class songwriting skills and signature arrangements, Memphis Moonlight is unquestionably Deb Ryder’s best album yet.

Ryder starts us off with the funky, horn-enhanced soul of “I’m Coming Home.” Her vocal tone is throaty and soulful and she has no trouble cutting through the mix to stake her claim in the spotlight. “These Hands” is tough, gospel-infused blues built on an edgy slide guitar riff and a tight pocket. Ryder’s emotion and earnestness flood both her lyrics and performance and the strength of her convictions is compelling and real.

“Second Chances” is a rocking West Coast Tejano blues about a dying friendship that features Los Lobos members David Hidalgo on accordion and Steve Berlin on saxophone. Tony Braunagel slays the drum set on this one and drives the groove into late night dancefloor bliss. The entire band is absolutely cracking on this take and they support Ryder’s wide-open vocals perfectly.

“Devil’s Credit Line” is an outstanding blues/rock track that finds Ryder teaming up with hot-handed guitarist Alastair Greene. The song is a reflection on the mistakes committed during those days of a wild, misspent youth we all think we got away with. Ryder turns in one of her best vocal takes on the album here and the ever-smoking Greene matches her stride for stride.

Ronnie Earl appears on the crucially soulful slow blues “Love Is Gone.” His complete blues mastery sits well next to Ryder’s own and the sound of the two of them together is as good as modern blues gets. Skip it at your own peril. Other songs of interest are the acoustic title cut “Memphis Moonlight,” “Just Be Careful,” and “Jump On It.” Deb Ryder is a top-shelf purveyor of blues and roots music who has the talent and presence needed to create her own legend. Highly recommended.

Listen to “Just be Careful”