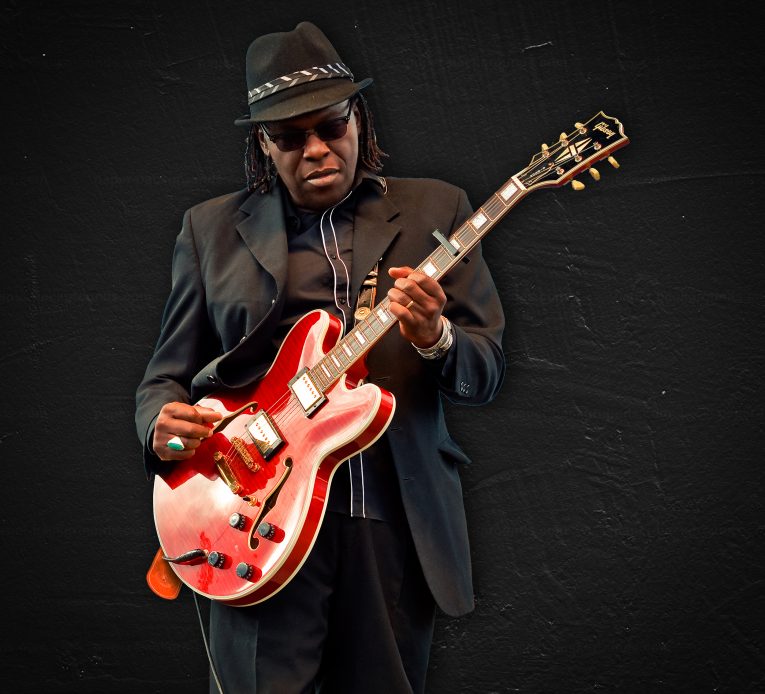 Joe Louis Walker, a legendary musician, is considered one of the greatest modern bluesmen of our time. Walker has won four Blues Music Awards and was inducted into the The Blues Hall of Fame in 2013. He has earned 48 W.C. Handy Blues Music Award nominations and four wins. JLW tours constantly, playing concerts and festivals across the globe.

Joe Louis Walker’s latest album, Everybody Wants a Piece, was nominated for a Grammy Award for “Best Contemporary Blues Album.”

JLW was kind enough to make the time to talk with me.

Martine: Your music’s been described as blues with a blend of rock, R&B, some jazz, gospel, soul and funk. How would you describe your music?

Joe: (Laughter) Oh, I think that was pretty good.

Martine: (Laughter) How did that blend of different genres come about?

Joe: More or less where I was from there was a lot of different music crossing over and being experimented with. It was just the generation I came from.

Martine: You’ve said that blues now encompasses numerous styles. Can you elaborate on that a bit?

Martine: (laughter) Do you think that helps the blues reach more people, maybe to younger generations?

Joe: Well, I don’t know. I always get this question. I’ve just come to the epiphany that you have to be somewhat older in your mind and maturity to be able to get the blues. Why would you expect someone 12 or 16 to like the blues when they haven’t got the blues?

Joe: But it’s cool. Blues was the cause celebre when 21 or 25 year olds could sing songs like they were 50 years old and act like they had experience when they really didn’t. And the guys who were 50 years old doing it, they were sort of out of style because of course most of the music industry is really a young people industry.

Martine: How did you originally get involved in playing the blues?

Martine: Many years ago, you made a transition from blues to gospel. Can you tell me about that transition?

Joe: I guess I’m sort of a restless person when it comes to music so I quit playing blues and just played gospel for 10 years, which was really rewarding. I got restless again and came back to playing blues. But I always have a gospel song on my records.

Martine: I love “Gospel Blues” on your latest album, Everybody Wants a Piece. That is a beautiful song with stunning guitar work.

Joe: You know we made it exactly so that when people see the word “Gospel Blues” they think there’s going to be singing on it. And there’s no singing. The guitar does the singing.

Martine: That’s what hit me. I listened to your guitar solo in the beginning and was really moved.

Joe: Yes, it’s got a nice quality to it.

Martine: Can you tell me a little more about the gospel that seems to be a thread throughout your music?

Joe: It’s just like the blues. Gospel was a part of my upbringing. I love it. And I loved it when my grandma used to sing it to me. I’ve always enjoyed it and that’s what I like to focus on in music.

Martine: Let’s shift gears a little. You’ve played with so many iconic musicians—Jimi Hendrix, BB King, John Lee Hooker, Bonnie Raitt, Buddy Guy, William Bell, Taj Mahal. Is there anyone you haven’t played with that you would really like to?

Joe: Oh, yes. There’s a lot of great musicians I’d love to collaborate with. I like Herbie Hancock.

Martine: What a talent.

Joe: And then Keith Richards. I like Derek Trucks a lot. And there’s a lot of female singers—I love Dawn Tyler Watson, she’s great.

Joe: Oh, the list is about as long as my arm. (Laughter)

Joe: Something like that. I’m really beyond…I don’t know how many records I’ve released anymore, I really don’t.

Martine: Are you in the studio now working on a new album?

Joe: Yes, I’m in the studio now working on a couple, three, four projects at the same time.

Martine: Fantastic. How fun.Tell me about your new record that you’re working on.

Joe: Well, it’s more of a soul record with blues guitar. The thing I’m working on now has more of a variety. I think it will gather a little bit of interest.

Martine: Did you write tunes for that album?

Martine: You are a prolific songwriter. Can you tell me about your songwriting process? Do you get chord progressions first, or lyrics or the melody?

Joe: I really don’t believe there’s a rhyme or reason to it when you write by yourself. When you’re writing with someone else, it’s like writing a book. It might be something we played at sound check or music I’ve been listening to. I listen to a lot of different stuff. When it comes to down to the record, I’ve been thinking of how to go about it before I do it.

Martine: So, it’s spontaneous for you in the studio?

Joe: It’s spontaneous. But I’ve been thinking about how to go about it, how to construct it. But you really can’t see the picture until it’s painted.

Martine: Is songwriting the same?

Joe: Well, if it’s the songs going to go with the record, it all has to make sense. For me anyway, you can do 12 songs all disconnected from each other. But usually, we read them back to back to see if they make any sense. (Laughter)

Martine: (Laughter) Okay. I get it. You’re starting a tour in January?

Joe: Well, I’m off to England and then the Island of Mustique for a few weeks. It should be fun.

Martine: I’ve read that you use different guitars for all your shows, is that true?

Joe: Not really. I use a whole bunch of them. Right now, what I’m playing is a Zemaitis. I play several guitars like Cara guitars. But my main axe is Zemaitis.

Martine: I know you have to go so we’ll wrap up. Thank you so much for taking the time to talk with me today.