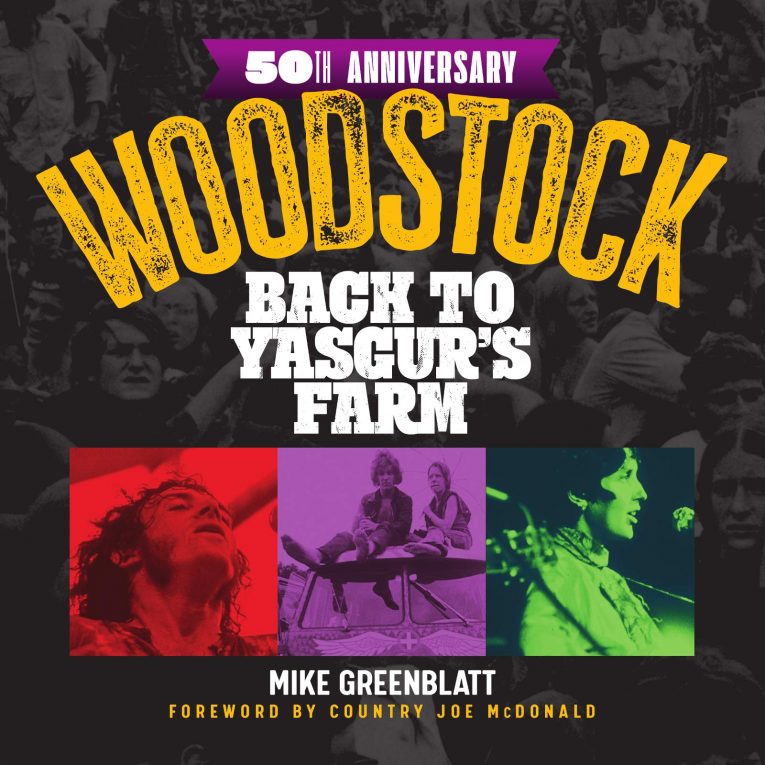 Woodstock continues to loom large in the public’s imagination five decades after its historic run from Aug. 15 – Aug. 18, 1969 in Bethel, New York. Veteran music journalist and festival attendee Mike Greenblatt delves deep into the people, music and events that helped make the festival a cultural milestone in his first book Woodstock 50th Anniversary: Back to Yasgur’s Farm, which hits shelves on July 10 via Krause Publications.

With a foreword by Country Joe McDonald, Greenblatt brings Woodstock Nation back to life through his own first-hand account, backed by the insights and memories of many of the key players responsible for staging the festival. Woodstock 50th Anniversary includes numerous interviews with musicians like Graham Nash, Carlos Santana, Joe Cocker, Richie Havens,  Country Joe McDonald, Edgar Winter, members of Jefferson Airplane, Canned Heat, and Creedence Clearwater Revival drummer Doug Clifford, who performed at Woodstock. The book also includes accounts from many of the technicians, band managers, production coordinators and other festival participants.

Greenblatt’s personal experience of Woodstock offers the reader a visceral account of the mud and the music from the point of view of an average weekend warrior. A teenager at the time of the event, the young festival goer was in attendance for the entire four days and had a bird’s eye view of events from directly in front of the mainstage. Along with a half million other festival participants, Greenblatt grooved to powerful performances by Jimi Hendrix, The Who, Santana, Janis Joplin, Johnny Winter, Crosby, Stills, Nash & Young, and numerous other legendary blues, rock and folk artists.

The author sets the stage for his first-hand account with an amusing vignette titled “Brown Acid Blues.” The narrative opens on the third day of the festival as Greenblatt’s mood moves from ecstatic to paranoid as he learns that the brown acid he just swallowed might be bad. To add to his misery, the tripping music lover has lost track of his only companion Neil at the festival, and a thunderstorm has enveloped the area, turning the festival site into a mud bath and silencing the mainstage music, which Greenblatt has relied on to keep him from going off the rails.

The writer builds a sense of the anticipation, the chaos, the camaraderie and the sheer magnitude of Woodstock for the reader, by weaving back and forth between the events taking place within his personal journey to those in the larger picture by filling in details about Woodstock’s creation, the innumerable challenges in staging the event, as well as providing background on the historical context in which the festival took place.

For example, in the opening chapter “And Off We Go,” Greenblatt describes aspects of his journey to Woodstock like getting stuck for hours in traffic jams and being forced to leave behind all their personal belongings to hike miles by foot to the site, while also providing initial impressions of the festival from performing artists like Jefferson Airplane’s bassist Jack Cassidy. Cassidy recalls how his band watched the numerous news reports on TV from their suite at the Holiday Inn. The veteran rocker remembers being amazed at the amount of people swarming into the area and being concerned that the stage still had not been constructed when the band arrived on the day before the festival.

Greenblatt provides insights into the numerous behind-the scenes challenges faced in staging Woodstock through commentary from key players like light designer/co-host Chip Monck and production coordinator/booker/co-host John Morris, as well as through interviews with a wide variety of musicians, who would later enjoy rock superstar status after launching their careers at Woodstock like Carlos Santana, CSN&Y founding member Graham Nash and the late great Joe Cocker.

The book also features a wide range of interesting historical artifacts like original posters, news clippings, parking permits, staff passes, as well as hundreds of candid photos of the performing artists, the festival grounds and audience members. One of the most fascinating inclusions is a photocopy of the original performers schedule, which was pretty much tossed out the window once the festival started due to factors like poor planning, bad weather, multiple technical problems and the huge problem of trying to transport artists and their equipment to the festival site.

Woodstock 50th Anniversary: Back to Yasgur’s Farm has something to offer young and old hippies alike. It provides readers with a comprehensive look at history’s most celebrated music festival and will make a perfect companion to the original Woodstock documentary and album, or to the upcoming 50th anniversary collections due to drop this summer. Highly recommended!