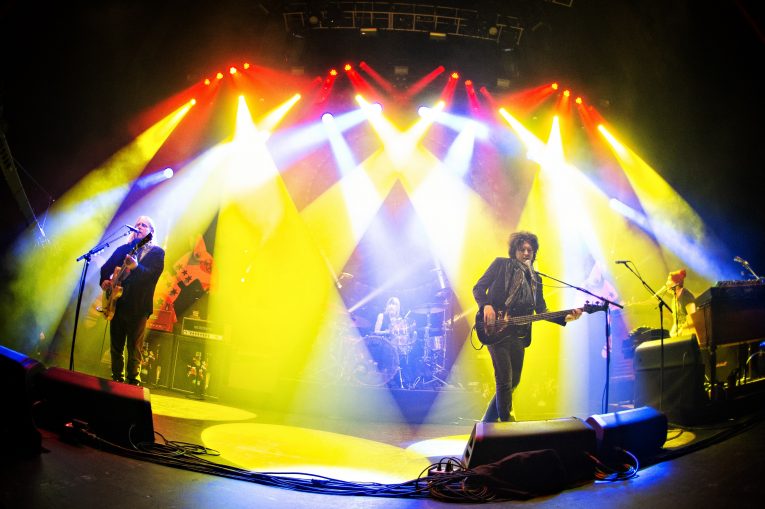 Gov’t Mule celebrates their 25th anniversary with a new concert film Bring On The Music – Live At The Capitol Theater. The set features live footage of the band performing 33 songs, interviews, behind the scenes footage and rare photos, and will hit shelves in multiple formats on July 19 via Provogue/Mascot Label Group.

Directed by veteran music photographer and director Danny Clinch, Bring On The Music captures the magic of the jam band extraordinaire over two nights between April 27 – April 28, 2018 in Port Chester, NY, at the historic Capitol Theater. The concert film follows on the heels of an audio release of Bring On The Music, which dropped June 28 and offers a different track listing.

Known for their organic and improvisational virtuosity, Gov’t Mule is recognized as one of the most timeless and revered bands in the world. Led by Grammy Award-winning guitarist and singer-songwriter Warren Haynes (Allman Brothers, The Grateful Dead), along with drummer Matt Abts, keyboardist/guitarist Danny Louis, and bassist Jorgen Carlsson, the concert film provides an up close and personal view of the band’s April 2018 performances at the Capitol Theater, one of the band’s favorite venues to play.

Bring On The Music opens with a black & white clip of Clinch interviewing Warren Haynes as he warms up prior to the show. Haynes peels off some wicked slide riffs on his vintage Gibson ES-335 while discussing his surprise at the longevity of the band in advance of its 25th anniversary and helps set the theme for the film, which deals with the passing of time and band’s treasured relationship to its audience.

“For a band that didn’t know we would do a second year or second album,” says Haynes. “The fact that we’ve done ten studio albums and gone past the twenty-year mark is pretty mind-blowing for us.”

The atmosphere in the crowd at The Capitol Theater is electric as the dimmer lights come up slowly to reveal two giant wooden mules on either side of the stage as Haynes fingerpicks the three-chord intro of “Traveling Tune.” The crowd whoops and cheers as the multi-talented performer steps up to the microphone to launch into the opening refrain of the self-penned road anthem, which pays homage to the band’s legion of fans and features an Allman-esque twin lead solo from Haynes and Danny Louis.

The setlist covers material from the entire span of Gov’t Mule’s storied career and a few tracks from its most recent album Revolution Come…Revolution Go, along with a surprise or two. The unpredictable four-piece outfit has a reputation for changing up their setlist on a nightly basis, which adds to the excitement of any Mule concert. One of the big surprises offered on Bring On The Music was a first-time ever cover of Pearl Jam’s “Come Back.” Haynes makes the song his own, opening the power ballad with just lead vocals and guitar, using heavy tremolo on his sound, and brings soul and passion to Eddie Vedder’s ode to a broken relationship.

Among the standouts is a scorching version of their 2004 Déjà Voodoo protest anthem “Mr. Man.” Haynes kicks ass vocally and instrumentally as he takes aim at the ruling class with the entire band flexing their musical muscle during the extended solo, which slowly builds from a spacious blues-rock jam until it explodes into overdrive as The Mule hits full throttle on this riff-driven rocker.

Of course, Gov’t Mule live mainstays like “Mule” and “Trane,” are present, as well as their oft-played live rendition of the Allman Brothers Band “Soulshine,” which is included as a bonus performance along with an alt-version of “Traveling Tune.” The set also feature behind-the-scenes footage, interviews, as well as a collection of rare photos from across Gov’t Mule’s career.

Bring On The Music is available on DVD, as well Blu-ray formats with a free poster included with each preorder. The live set is must-have for Mule fans and will also serve as great introduction for those unfamiliar with these giants of jam. Prepare to be dazzled!

The film is available on Blu-ray and as part of a CD/DVD package, double vinyl, digital and includes bonus tracks.

Pre-order link and for more details on each offering.