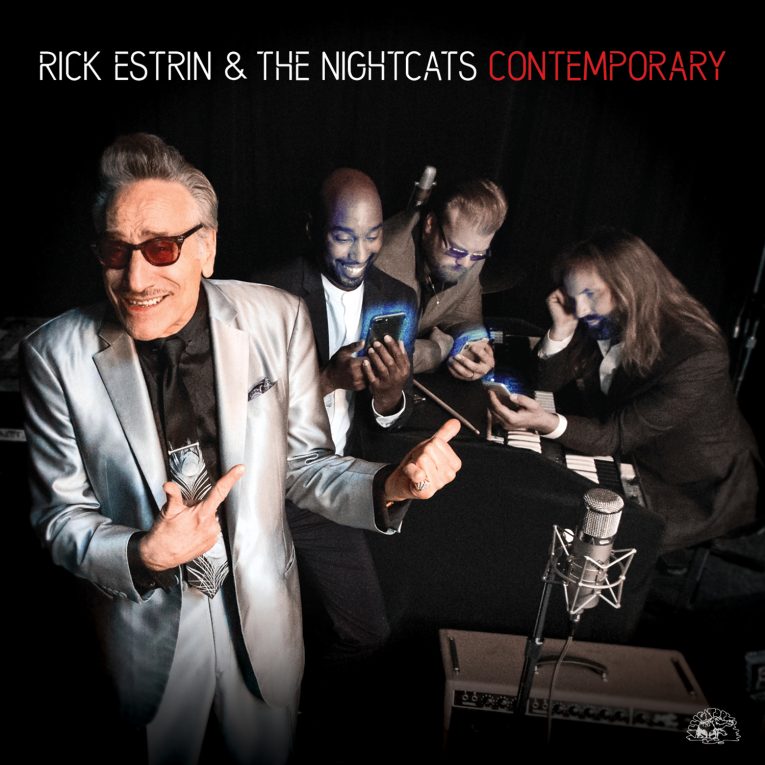 Rick Estrin & The Nightcats, one of the best blues bands in the world, is back and showing off a brand new album, Contemporary, that comes out September 20th, 2019 on Alligator Records.

Having won 2018’s Blues Music Award for “Band of the Year”, Rick Estrin & the Nightcats features the combined talents of blues harmonica virtuoso and soulful singer Estrin, six-string superhero Kid Andersen, piano/organ man Lorenzo Farrell and drummer Derrick “D’Mar” Martin. They are poised to keep these four stellar talents busy for a long time yet to come. Contemporary is produced by Andersen and Estrin.

Estrin has long been recognized as an outstanding harmonica player and one of the finest showmen in the blues. His fat-toned harp, quick wit, slick vocals, hipster persona, and unforgettable sense of personal style have made him an icon in modern roots music and taken him around the world.

Born in San Francisco in 1949, Estrin’s older sister gave him a copy of Ray Charles’ The Genius Sings The Blues when he was 12 and he became obsessed with music. He began playing harmonica at 15 and by 18 was playing in clubs around the city. His harp style is deep in the tradition of harmonica masters Sonny Boy Williamson II and Little Walter Jacobs and he writes songs with the brilliant lyricism and humor of giants like Louis Jordan and Chuck Berry. Estrin is a bigger-than-life character in all ways but always comes across as the real deal.

Contemporary is a wonderful record that finds Rick and his cohorts in fighting shape and ready to go. This time out, they take on some different sounds, arrangements, and grooves that may surprise some longtime fans but imbue it all with the classic Nightcats vibe. The record opens with the percolating noir-ish meditation on time and aging “I’m Running,” in which Estrin recounts his dicey relationship with Father Time and his decreasing odds of escaping his clutches. The tune simmers on a low boil until Rick unleashes some of the most toneful harp licks of his career and shifts the band into a higher gear.

The title track, “Contemporary,” is hilarious and ultra-creative. It outlines all the changes Estrin needs to make to become a full-on modern superstar and digs deep into funk, heavy rock, and hip-hop sounds. It even includes a touch of Auto-Tune on Rick’s vocals to complete the effect. It’s the most stylistically daring song Estrin has ever recorded but he and the band slam dunk it for a big win. The track clearly demonstrates the depth contained within The Nightcats and just how much mojo Estrin has as a performer. One listen and you’ll realize why he has five Blues Music Awards at home with his name on them.

“New Shape (Remembering Junior Parker)” is a funky and soulful cut about a lovely young woman who has gone from “skin and bones” to a thicker, more alluring silhouette that very much meets with Rick’s approval. It’s a cool groove that’ll move blues fans from the bar to the dancefloor in a hot minute. “House Of Grease” is an instrumental track that lets guitarist Andersen and keyboardist Farrell stretch out and show us all a good time. “Cupcakin’” keeps the instrumental glory going and sounds like a 21st Century version of Booker T & The MGs. “New Year’s Eve” and “Nothing But Love” are also highlights.

Contemporary ends with yet another instrumental, “Bo Dees Bounce,” that takes the record out with the kind of straight-ahead blues that Estrin has built his legend upon. His phrasing and tone are spot-on and inspiring and the whole crew responds to every lick he plays. Rick Estrin & The Nightcats are mighty, indeed, on this new set and give no indication of ever slowing down. Estrin is a roots music treasure and we’re all fortunate to have been blessed with another blast of his greatness.

For more information on Contemporary and Rick Estrin & The Nightcats: