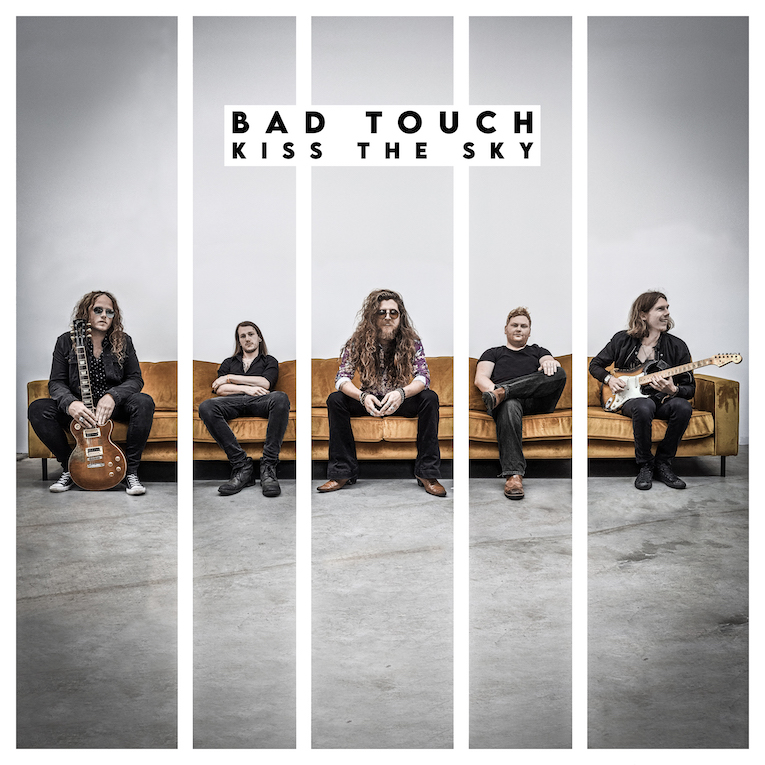 Bad Touch is a five-piece classic rock outfit from the county of Norfolk, on the UK’s East coast, whose fourth studio album Kiss the Sky is set for release this June 19, 2020. A moment’s reflection should be enough to tell you that this is music you should definitely check out.

A short listen to album opener, “Come A Little Closer,” and you may be convinced. A chainsaw fuzz-guitar riff as joyous as it is powerful leads the way into a rollicking slice of melodic fun. The walking bass (credited to Michael Bailey) forms the spine of the piece, on top of which is laid a solid foundation of rhythm and lead guitar, supplied by Rob Glendinning and Daniel Seekings, layered organ and fine rock vocals by Stevie Westwood, who is clearly having a ball. Westwood’s voice displays the raw effectiveness of Robert Plant. No small amount of the power and groove is supplied by drummer George Drewry, who utilizes the full kit to great effect. Indeed, on repeated listens, Drewry’s inventive rolls, licks and ornamentation grow ever more impressive.

“Strut” opens with the same appealing formula, before switching down a gear for a laid-back chorus. “Just rock up in your own boots, you got nothing to lose,” sings Westwood, “I’m ready to party, we’re just getting started.” His words sum up the essence of Kiss the Sky. It is, before all else, fun. That said, this is an album which delves deeper, both musically and lyrically, than you might expect. “Out in the darkest side of town,” is where the band often ventures, though with a smile on their faces and a literal song in their hearts. “Strut” also displays another formidable weapon in the band’s arsenal. There are some lovely harmonies here, a facet which Bad Touch could definitely make more of, and which are reminiscent of so much of Queen’s work.

It is no coincidence that Queen’s astonishing Sheer Heart Attack album was recorded at Rockfield Studios, in Monmouth, Wales. Bad Touch, who are very familiar with the long and prestigious history of the studio, chose this same location to lay down Kiss the Sky. “…obviously for its legendary reputation,” they state, “but (also) because it’s just like being at home. It’s what we know, being in the countryside and where I feel we are all inspired.”

This wish to feel as ‘at home’ as possible is clearly important to the band. Bad Touch produces a deep, far-reaching sound, which remains firmly rooted in the every-day, the land, the people. They take much inspiration from their rural Norfolk surroundings of wild moors, salt marshes and sand-dunes. No surprise then, that Kiss the Sky is honest, earthy rock, incorporating, as rock always has, timeless elements of blues, R&B, and country. Have a listen to “Sun and the Moon.” The band switches effortlessly from overdrive to third gear and back, moving from Waylon Jennings-esque swampy blues to AC/DC’s easy power to soulful, funky keys, before fading out with a beautiful, understated roots riff. It’s the group’s versatility, as well as their musicianship, which marks them out from the pack.

Choosing to title their album Kiss the Sky says plenty about the band’s ethos and intent, referencing, as it does, Jimi Hendrix’s “Purple Haze,” which shook rock to its foundations in order that it might re-build itself in grander, higher, fashion. Above all, Bad Touch is committed to writing, recording, and playing, infectious, feel-good songs. “I know it’s a cliché,” says Westwood, “but, in our humble opinion, this is our most exciting recording to date.” If you are at all moved by classic rock, you should make room on your shelf for this record.