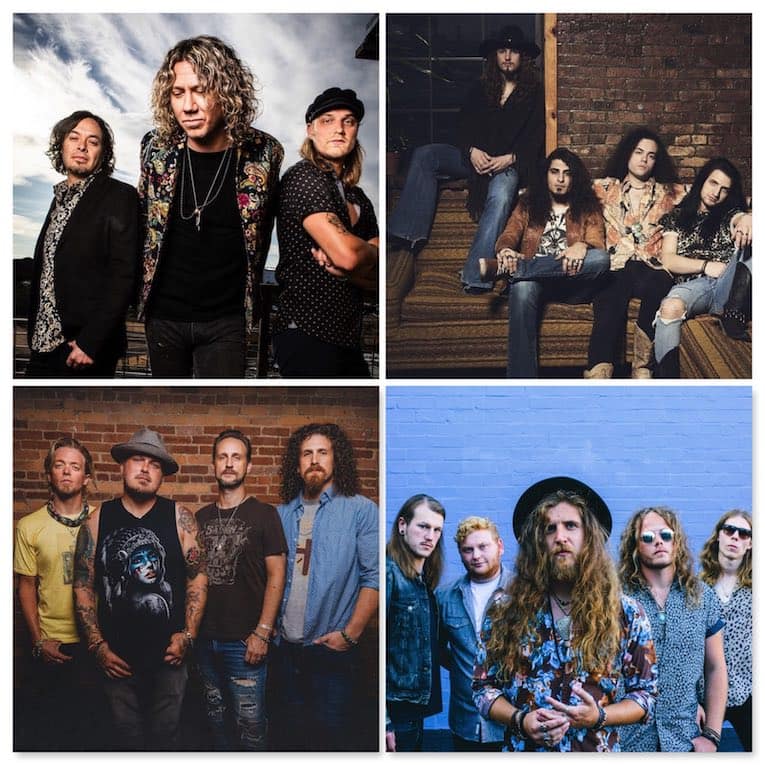 Sometimes you just need to rock. Even during the pandemic when you might be drawn to soothing sounds to take the edge off frazzled nerves, something must be said for the power-punch of rock music’s total escape. There’s nothing like great rock/rock and roll and even the harder side of blues/rock to sweep you into heavy drums, searing vocals and guitar leads.

Especially if you crank it.

And we all need that now during these troubled times. Each of these 10 modern rock bands are hand-picked, the songs hand-picked as well. A few you might know about, some you probably don’t. Every single one of them is unique and highly talented. These are honest choices.

Listen to them loud. In your car, on your home stereo or with headphones and enjoy the quality of the music. This isn’t head-banging music, at least not in my estimation. This is just great rock and roll by talented artists/bands. Each one has their own sound, their own swagger and shake. Some might be a little blues-infused, others not so much.

This is real music with real musicians, not artists who create sounds on their computers and run their vocals through programs that make them sound like they’re not. A dose of realness is necessary now.

If you find some you love, please buy their music—download or purchase a CD. In these tragic times for musicians who aren’t touring because of COVID-19, they deserve more than a fraction of a cent from a streaming service.

South of Eden
“The Talk” is the title track from South of Eden’s new EP, The Talk out August 21, 2020. The quote on the band’s website says it all, “We’re a band that writes, records, and plays like the pioneers of rock before us. We aren’t looking to bring anything back, but instead, to remind people what rock n’ roll means. No rules. This music represents what we believe is real, raw music. No click tracks and triggers or copy and paste bullshit. Just a bunch of hippies in the room.”

The Black Moods
Based in Arizona, the band delivers a modern interpretation of rock and roll, a timeless sound of electric guitars, anthemic hooks and percussive stomp. They play raw, amplified rock and roll. The band’s sophomore record Sunshine, dropped  May 8th, 2020 on the Steelhorse Entertainment/The Fuel imprint. The group is a mighty power trio made up of frontman/guitarist Josh Kennedy, drummer Chico Diaz and bassist Jordan Hoffman.

The Black Moods began building their audience the old-school way–by hitting the road, touring heavily, promoting albums like their 2012 self-titled debut and 2016’s Medicine with gigs across the country.  By the time their song “Bella Donna” hit the radio airwaves in the summer of 2018, the song became a top 40 hit on the Billboard Mainstream Rock chart. They recorded their new album Sunshine with Grammy Award-winning producer Johnny “K” Karkazis, out May 8th, 2020.
Website

Blacktop Mojo
From Palestine, Texas, modern rock band Blacktop Mojo is a blend of grunge, classic rock and Texas metal and was formed in 2012 by vocalist Matt James and drummer Nathan Gillis. Blacktop Mojo’s fiery blend of heavy grunge grooves, classic rock guitar riffs, and Southern Metal shredding, falls somewhere between Soundgarden and Lynyrd Skynyrd. After their debut album “I Am” in 2014 and a few years cutting their teeth in dive bars, dancehalls, and honky tonks, the band decided to go all in. In 2017 they teamed up with famed Muscle Shoals Sound producer Jimmy Johnson (The Rolling Stones, Lynyrd Skynyrd, Bob Seger) for their sophomore outing entitled, “Burn The Ships” at Sound Emporium in Nashville. During the recording, the guys took the leap and quit their day jobs, moving into a small house together in Palestine, Texas where they all still live today. The house created an unbreakable fellowship between the band and a culture of constant creativity. Their latest effort Static, was released May 2020.

Black Stone Cherry
The Edmonton, Kentucky-based rock n’ roll quartet Black Stone Cherry was raised on musical forefathers such as Cream, Led Zeppelin, Muddy Waters, and the Faces, among other 1970s staples, and, now, with its 7th upcoming album The Human Condition out October 30, 2020, where the grooves feel organic, the riffs are mountainous, the performances are urgent and the hooks shine. Sonically, The Human Condition is one of BSC’s most visceral and hooky releases. Guitarist/vocalist Ben Wells explains, “With this one, we cranked up the amps, the drums are in your face, and there are some really heavy riffs. After 19 years and 7 albums, we wanted to prove that we still kick ass. This album feels like a rebirth.”

Stone Horses
With a modern rock groove, Stone Horses is the consummate outsider rock band from the mid-Atlantic region of the US. Never quite fitting into “heavy rock”, alternative or blues genres they draw from to create their music, their self-titled EP, their sophomore effort, is a perfect blend of dark melodies, big choruses and witty lyrics. The band consists of singer John Allen, drummer Jason Heiser, Ted Merrill on gitar, Rick Reynolds on bass. They have toured with Slash, Myles Kennedy and the Conspirators, Greta Van Fleet, Rival Sons and more. Their new EP Good Ol’ Days was released July 31, 2020 via Broken World Records.
Website

Shadow & The Thrill
Shadow & The Thrill is a modern blues infused, groove laden melodic rock band from Los Angeles, CA. Their debut album, Sugarbowl was released August 14, 2020 via Deko Entertainment. The two musicians behind the band are Grammy nominated Tony Cardenas-Montana  (Great White) and Brent James Arcement a sought-after touring and session drummer, producer. Tony on vocals, guitar and bass and Matt on drums, B3, keys and percussion, this is a melodic band with top-tier musicianship.
Website

Dirty Honey
Guitarist John Notto likes to call the sound of his band, Dirty Honey, “New Fashioned Rock ‘n’ Roll.” You’d be hard-pressed to find a better description. The Los Angeles quartet is indeed a rock ‘n’ roll band, straight up and with no apologies or explanations and a fan base that includes Guns N’ Roses, Slash & the Conspirators, and The Who, all of whom have tapped Dirty Honey to open for them. The five songs on the group’s self-titled debut EP are filled with everything that’s real rock fans love — meaty melodies, explosive dynamics, tight, gritty rock vocals and heavy guitar riffs. The band consists of singer Marc Labelle, guitarist John Notto, bassist Justin Smolian, and drummer Corey Coverstone.

The band tracked with producer Nick Didia (Pearl Jam, Rage Against the Machine) at the helm. Dirty Honey is a huge blast of hard rock of the Led Zeppelin/Aerosmith/AC/DC variety with loud guitars and big drums. One quick spin and you’ll understand why Dirty Honey has been spotted opening for rock legends like The Who and Guns N’ Roses.
Website

Bad Touch
Formed in 2010, modern rock and roll outfit Bad Touch is known for their no-nonsense rock and roll and feel-good rock music. From the UK, the band has extensively toured the UK and Europe and played major festivals. Their latest and fourth studio album “Kiss The Sky”, out March 13, 2020 is a no-nonsense rock and roll album with one helluva lead singer, Stevie Westwood, at the helm. For this album, Bad Touch have stripped everything back and looked at what the essence of what makes a great album at the core–great songs. They’ve stuck to what they do best, which is writing catchy, good rock music.

Sons of Silver
From Los Angeles, CA Sons of Silver is a rock n’ roll bad that quietly attracted an impassioned fan base worldwide, with extensive touring in North America and Europe under their previous name, Pete RG. The group’s collaborative songwriting style, signature sound and collective years of experience, makes Sons of Silver such a standout phenom in the alt rock scene. In addition to vocalist Peter Argyropoulos, original Pearl Jam drummer Dave Krusen (who was recently inducted into the Rock N’ Roll Hall Of Fame) and Candlebox bassist Adam Kury, provide the backbeat while former Skillet guitarist Kevin Haaland and keyboardist and esteemed engineer Brina Kabler round out the band’s signature sound.Their EP Doomsday Noises is out now.
Website

In/Vertigo
Hard rock band In/Vertigo hails from Calgary, Canada and released their EP Sex, Love and Chaos July, 2020 via Rockshot Records. Formed in 2016, the quartet consists of Reed Alton on vocals, Shaddy Elsaghir on guitar, Duncan McCartney on bass, and Keaton Byfield on drums.  A quintessential rock n’ roll act, the band aim their EP at the “music world who unapologetically thirsts for classic/hard rock.”
Website