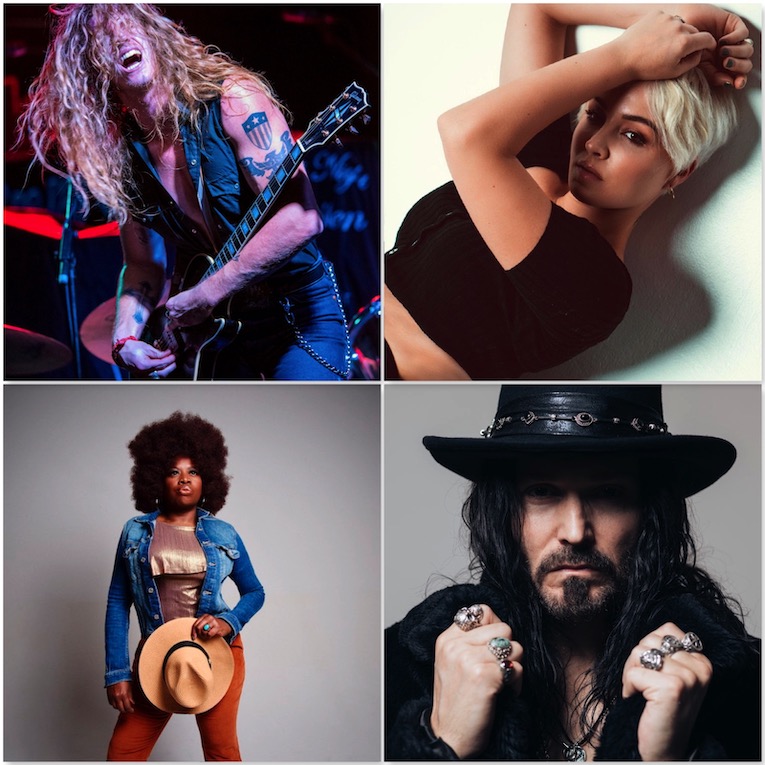 It’s summer and live music is opening up! How long have we all been waiting for this? Too long.

Time to celebrate with some new hot blues-rock and rock music and introduce you to a few artists you might not know about yet, some you do. Most tracks are from upcoming albums and others from brand new releases. Kick back or crank it, either way works for these crucial new songs that are 100% straight out of the oven. Consider them essential parts of your summer experience. There’s info and videos for each artist/band so if you like one of them, you can take it from there.

It’s a mix of great blues, blues/rock, and rock and roll to kick off your next summer party or your weekend off. These songs are guaranteed to get your body moving and your temperature rising. The cool thing to do would be to play them loud enough for your neighbors to enjoy. They can thank you later.

Caleb Johnson
This is some hot rock and roll. Wait ‘til you hear Caleb’s voice. On June 14, 2021, Caleb Johnson will release his second album, Mountain Mojo Vol. 1. Recorded in three days in Nashville’s Blackbird studios, Johnson and the band pushed through the challenges of 2020 and created his best album yet. His studio band consists of Jason Bonhman, Tyler Bryant, Josh Sawyer, Audley Freed, Tony Lucido, Mike Webb, Damon Johnson, and Gale Mayes. Engineered by Grammy winner Brandon Bell and a host of other Grammy winners, the album is a must listen. Check out his new single feat. Audley Freed and Jason Bonham. This is a rockin’ winner.
Website
New video see here

Troy Redfern
British slide guitarist and singer-songwriter, Troy Redfern, dubbed by the British press as “the king of slide guitar,” released his new single and video “Waiting For Your Love” from his forthcoming album, The Fire Cosmic out August 6, 2021 via RED7 Records. This guy is on fire. Watch the video and you’ll see why. Troy is on a UK tour with Robert Jon & The Wreck September of 2021. Troy Redfern band is comprised of Troy Redfern (vocals, guitar), Darby Todd (drums), Dave Marks (bass), and Ron ‘Bumblefoot’ Thal (guitar), considered one of the best rhythm sections in the UK.
Info and video see here

Christone ‘Kingfish” Ingram
Guitarist, singer, songwriter Christone is going to release his sophomore album, 662, on July 23, 2021 via Alligator Records, produced by Grammy winner Tom Hambridge. His newly released title track is hopping good blues & rock & roll. According to Rolling Stone, “Kingfish is one of the most exciting young guitarists in years, with a sound that encompasses B.B. King, Jimi Hendrix and Prince.” Don’t miss out on this one.
Info and video see here

Dustin Douglas & The Electric Gentlemen
Blues/rock power trio Dustin Douglas & The Electric Gentlemen infuse their trademark sexy grooves, infectious rhythm and Douglas’ soaring guitar work into their new single and video “Broken.” From Pennsylvania, the band is known for hard rocking blues with groove and hints of 60’and 70’s rock in their modern blues/rock sound. The band released their sophomore album Break it Down in 2018. Hot and rocking.
Info and video see here

Maggie Rose
Nashville-based rock and soul singer Maggie Rose is about to release her third studio album, Have A Seat on August 20, produced by Ben Tanner of Alabama Shakes, recorded at FAME Studios in Muscle Shoals, AL. Rose recorded live with a lineup of heavy-hitters that includes bassist David Hood of the Swampers (the group of session musicians who played on records from legends like Aretha Franklin and Etta James) and guitarist Will McFarlane (Bonnie Raitt, Levon Helm), along with her longtime bandmates/collaborators Larry Florman (background vocals/percussion), Alex Haddad (guitars), and Sarah Tomek (drums) of Them Vibes. Also featuring an esteemed string section and swampy horn ensemble, Have a Seat continues the free-flowing musical exploration she first began on her powerhouse 2018 album Change the Whole Thing.
Info and video see here

Bette Smith
Powerhouse Rock and Soul singer, songwriter Bette Smith released her new video for “I’m A Sinner” from her album, The Good, The Bad, and The Bette out on Ruf Records and produced by Drive-by Truckers’ Matt Patton. Try and tear yourself away from this video with Smith’s powerful vocals and dynamic performance. Infusing soul music into rock and roll, Smith is an artist to watch. She’s on her way.
Info and video see here

I welcome your comments in the comment section below.